Declaration of War Colt Graduates in Rained-Off With Anticipation 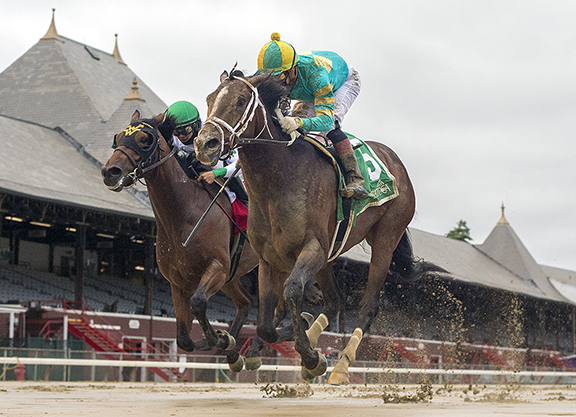 Fire At Will | Sarah Andrew

Three Diamonds Farm's Fire At Will (Declaration of War) came from off the pace to win his main track debut in an off-turf renewal of the GIII With Anticipation S. at Saratoga Wednesday. Sent off the 3-1 second choice behind the Wesley Ward-trained Blame the Booze (Blame), Fire At Will was allowed to ease back to last of four, well behind the favorite, who carved out opening splits of :22.60 and :45.61 on the sloppy and sealed track. Kicking into another gear passing the five-sixteenths marker, the colt gained the advantage along the rail, and repelled Blame the Booze late en route to a half-length victory. Originally carded for 1 1/16 miles on the turf, the With Anticipation was cut back to seven furlongs once moved to the main track.

“I talked to the assistant [Nolan Ramsey] and we talked about staying close to the pace,” explained winning rider Irad Ortiz Jr., who was partnering the colt for the first time. “Speed is doing well so far, but I don't like to rush the horses too much, so I just broke out of there with good intentions. He didn't have the speed to stay close with them, so I just let him be him, let him settle and tried to save some ground. When I asked him, he responded really well from the half-mile all the way to the wire.”

In his career debut, Fire At Will, who was accompanied by Tyler Gaffalione, came home sixth going a mile and a sixteenth over the Saratoga turf Aug. 8.

“With a short field, it made sense [to stay in the race],” explained Ramsey, assistant to Mike Maker. “The horse really seemed to get a lot out of his first start and he's been pretty sharp since. He worked a really nice half for us last time and we talked to Mr. [Kirk] Wycoff [owner, Three Diamonds Farm] and Mike and made the decision to stay in and we're clearly happy we did.”

This story was posted in Top News and tagged Blame the Booze, Declaration of War, Fire At Will, Mike Maker, Saratoga, Three Diamonds Farm, With Anticipation.