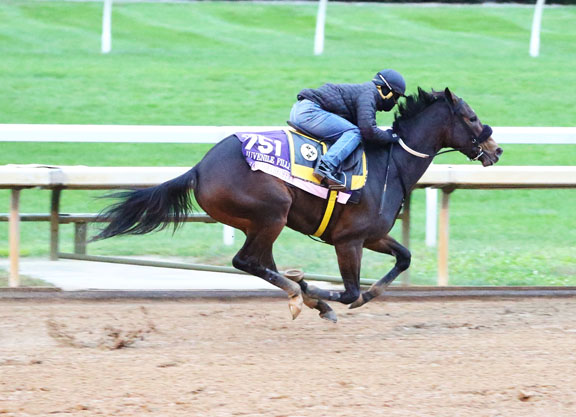 “I think it was her best work. She finished up really strong and galloped out great,” said trainer Tim Hamm, who co-owns the filly under his Blazing Meadows banner. “I weighed working [tomorrow] and went out and looked at the track twice and saw it was opened up. Plus, the timing was a lot better today.”

A debut winner at Gulfstream in May, Dayoutoftheoffice took Saratoga’s GIII Schuylerville S. by six lengths before stretching out to a one-turn mile in the Oct. 10 Frizette.

“I have been waiting for two turns all year,” Hamm said of the Breeders’ Cup trip. “We would have run in [Keeneland’s GI Darley] Alcibiades [S. Oct. 2] had the timing been a little bit different. We are looking forward to two turns.”