Daughter Of Frankel A New Rising Star At Saint-Cloud 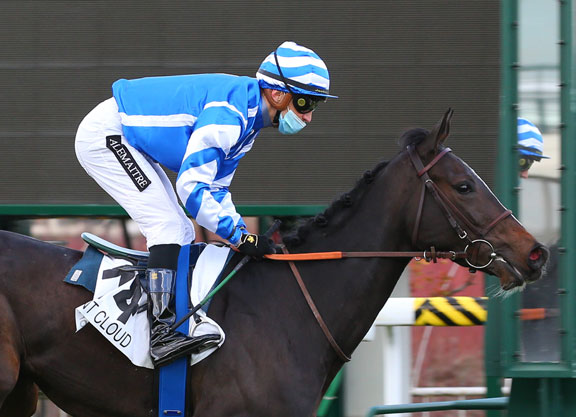 There were several unraced fillies in the line-up for Thursday's 10-furlong Prix Monade at Saint-Cloud with immense residual value and abundant racing promise, but at the end there was only one that mattered as Yeguada Centurion's Sibila Spain (Ire) (Frankel {GB}) put them to the sword with an audacious front-running display of power. Showing impressive instant pace to arrive at the head of affairs soon after breaking from the widest stall, the April-foaled daughter of the high-class L'Ancresse (Ire) (Darshaan {GB}) was then able to switch off and cruise in an untroubled lead for Aurelien Lemaitre. While her rivals waited and stacked up behind, the 9-1 shot effectively killed the contest in early straight as she kicked approaching the final two furlongs. Having built a sizeable advantage by the time she reached the furlong pole, the bay allowed her rider a lingering look around and she was being eased from there with no conceivable threat. At the line, she had registered a resounding nine-length success from the Nicolas Clement-trained Play All Day (Kitten's Joy), who in turn had 3/4 of a length to spare over George Strawbridge's Vouchsafe (Ire) (Kingman {GB}). The latter is a half-sister to the multiple group 1 winner Moonlight Cloud (GB) (Invincible Spirit {Ire}) and was one of the clutch of bluebloods cut adrift by the dynamic winner. Also in the backwash was the fourth-placed Urbania (GB) (Sea the Stars {Ire}), the Wertheimers' daughter of the G1 Grand Prix de Saint-Cloud winner Plumania (GB) (Anabaa), and Godolphin's eighth-placed Hidden Thought (GB) (Dubawi {Ire}), a daughter of the high-class Secret Gesture (GB) (Galileo {Ire}) in what has to be the most intriguing European maiden so far in 2021.

Sibila Spain marks the first serious prospect and is the first winner in 2021 for the burgeoning Christopher Head stable and, as her name suggests, is owned by Spanish interests. Leopoldo Fernandez Pujals is a relatively new but significant presence on the bloodstock stage, with this €240,000 purchase at the Arqana Deauville August Yearling Sale coming just weeks prior to his spending spree at the 2019 Keeneland November Breeding Stock Sale. Sibila Spain was bought two days after La Venus Espagnola (Ire) (Siyouni {Fr}) sported the Yeguada Centurion silks in public for the first time at the Normandy track's racing festival.

“This horse was initially trained in Madrid and then sent to the training centre of Alban Chevalier du Fau in West France in November,” Head explained. “She came to me Feb. 2 and doesn't have too much work behind her, so she's certainly not 100% yet and has a lot to learn, so I will try to improve her with every run. It wasn't the plan to go to the front, but after she broke so well Aurelien said she was very comfortable with her ears pricked so it was best to go on. She proved clearly the best in the race and although I have an idea where she will run next, I will talk her to owner first.”

L'Ancresse raced in the Michael Tabor colours with distinction for Ballydoyle and was second in the 2003 G1 Irish Oaks before finishing in the same position in that year's GI Breeders' Cup Filly & Mare Turf at Santa Anita. Only a neck behind Islington (Ire) (Sadler's Wells), with the likes of Yesterday (Ire) (Sadler's Wells), Heat Haze (GB) (Green Desert), Megahertz (GB) (Pivotal {GB}) and Riskaverse (Dynaformer) in arrears in one of the strongest editions of that prize to be run, she was becoming the latest to fly the flag for Roger Baines' Somerset-based Britton House Stud. Her dam Solo de Lune (Ire) (Law Society) was an outstanding font of top-class runners, being responsible for the G1 Prix Saint-Alary heroine Cerulean Sky (Ire) also by Darshaan and Moonstone (GB) (Dalakhani {Ire}), who took the G1 Irish Oaks having been second in the Epsom Classic.

L'Ancresse took time to emerge as a smart producer in her own right, but her first foal Minkova (Ire) (Sadler's Wells) did throw the G3 Henry II S. and G3 Ormonde S. winner Magic Circle (Ire) (Makfi {GB}). Her 2009 progeny was Chamonix (Ire) (Galileo {Ire}), who took the Listed Oyster S. and Listed Listowel S., but it was only in 2015 when she first visited Frankel that the magic began to occur. Master of Reality (Ire) was a slow-burner and ultimately a dour stayer, but a high-class one who captured the G3 Vintage Crop S. and was third in the G1 Gold Cup at Royal Ascot and a head second before being demoted to fourth in the 2019 G1 Melbourne Cup, GSW-Ire, G1SP-Eng, SP-Fr, $485,468. A year later, the useful listed-placed Eminent Authority (Ire) was another son of the Juddmonte giant to boost his dam's profile while her 2017 filly Frankenstella (Ire) showed promise last term as a staying handicapper who could make her presence felt in black-type company. Sibila Spain is her last known foal, but her ability to inject pace into a middle-distance trip at the first time of asking is both surprising and highly encouraging given that the family stay much further and tend to need time. With that in mind, she could be some closing act.