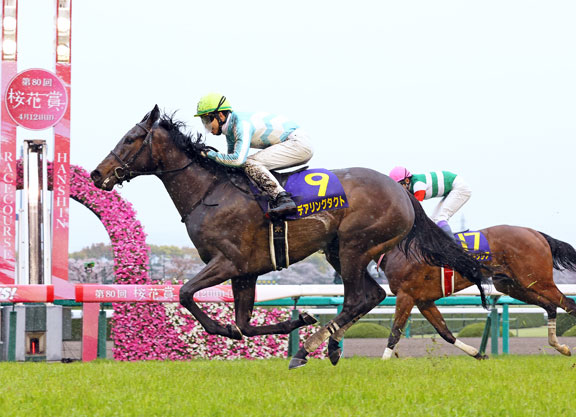 Des Ailes (Jpn) (Deep Impact {Jpn}), the first foal out of 2014 G1 Prix de Diane and G1 Poule d'Essai des Pouliches victress Avenir Certain (Fr) (Le Havre {Ire}), puts her unbeaten record on the line and jumps up into group-race company for the first time in Sunday's G1 Yushun Himba (Japanese Oaks). A debut winner at Hanshin on Mar. 15, she added the Listed Sweetpea S. at Tokyo on May 3 to her resume. Both those starts were over 1800 metres, and she adds another three furlongs on Sunday when stretching out to 2400 metres. Trainer Yasuo Tomomichi indicated Des Ailes has displayed maturity, saying, “She was calm making the long trip to the track last start and even though her career is short, she has already passed many tests. I think the Tokyo 2400 meters should suit her.”

Des Ailes breaks from the rail as the 3-1 second choice, and heading the morning line odds at even money is Daring Tact (Jpn) (Epiphaneia {Jpn}), who is also unbeaten and provided her first-season sire with a significant boost with a victory in the G1 Oka Sho (Japanese 1000 Guineas) in her first try in group company last out on Apr. 12. She has a slightly greater gap to bridge than Des Ailes distance-wise, having never been further than a mile, but her handy victory in the Oka Sho leaves no reason to suggest the trip is outside of her scope. Daring Tact also races to the left for the first time, and trainer Haruki Sugiyama said she has been training well in that direction. “From her morning work to the left, I don't see any problem with the direction, and she should handle the distance if she remains relaxed,” he said.

Win Marilyn (Jpn) (Screen Hero {Jpn}) comes into this off a victory going 2000 metres at Tokyo in the G2 Sho Flora S. on Apr. 26. Cravache d'Or (Jpn) (Heart's Cry {Jpn}) has won just once in five tries but has never been far out of it otherwise. She was second in the G2 Tulip Sho on Mar. 7 before finishing fourth over the heavy going in the Oka Sho.