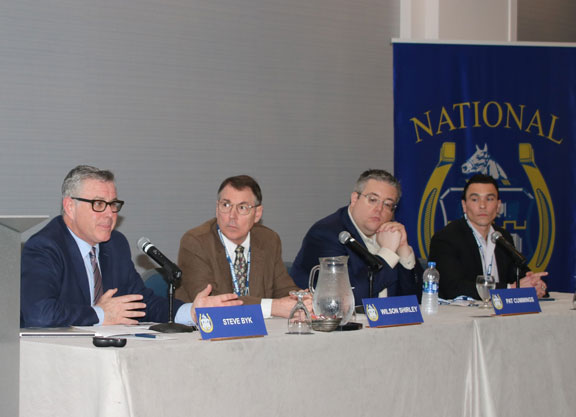 CLEARWATER BEACH, FL.–Giving up to get more was a major theme of two panels Wednesday at the National HBPA Convention's first day of horse-racing industry discussion and presentations at the Sheraton Sand Key. The takeaway: more statistical information, including past performances for upcoming race cards, should be provided free or at a radically reduced price to the public in order to spur increased wagering and foster a new generation of horseplayers.

“The No. 1 goal in this industry should be to increase handle,” said Patrick Cummings, executive director of the new Thoroughbred Idea Foundation, a horse-racing think tank created to find paths to growth for horse racing. “If we grow the betting on the business, we will make everyone wealthier.”

Eric Hamelback, chief executive officer of the National Horsemen's Benevolent & Protective Association, opted to have a keynote panel comprised of Thoroughbred Idea Foundation representatives instead of an individual speaker. Most prominently was the idea of making more data available for free to the public, especially with the anticipated expansion of legal sports betting across the country.

“One of the biggest hurdles when I'm trying to get my friends involved is that you have to pay for the basic information to make an educated wager,” said AmWager's Papo Morales, an afternoon panelist who is simulcast director/program coordinator for the online wagering platform AmWest Entertainment/AmWager. “… The basic raw pps (past performances)–I'm not talking about speed figures necessarily– but the raw data should, if not free, be available at minimal cost, cents actually. If you want to upgrade, if you want to get Bris, Thoro-Graph, then you're going to have to pay for a premium product. But we're trying to grow this sport.”

Equibase, the industry's official data-keeper formed in 1990 by The Jockey Club and Thoroughbred Racing Associations-member tracks, does offer considerable free information at equibase.com but not the basic past performances or raw data files that TIF recommends.

Said Cummings: “When you have to pay to become more informed, we're saying release those shackles and turn it into a marketing expense.”

Glen Hill Farm President Craig Bernick, who came up with the idea for the Thoroughbred Idea Foundation, said during the keynote panel that the think tank has four areas it believes the horse industry needs to improve: pricing for customers gambling on horse racing, transparency, innovation and technology and access to information.

“The retail price for horse racing generally at 20% is four times what it costs to bet on a normal sporting event,” he said, referring to takeout, or the money coming off the top of each dollar bet that goes to the track, purses and taxes. “As young people decide they want to start gambling, and sports betting gets legal in more and more states, we're up against it if we continue with that model.”

Wilson Shirley, an industry consultant on the statistics panel, said other sports are catching up with baseball's Sabermetric revolution in the 1970s and that racing must as well, including tracking all the information of individual horses, rather than just where the field is at a certain point in a race.

“It's going to be like the cameras on self-driving cars that have to process trillions of terabytes of information every second to stop wrecks,” Shirley said.

“… It's a great challenge and a great opportunity for developing data as a way to deliver the sport to the public.”

Shirley urged horsemen's organizations to assert and claim a proprietary right on behalf of their members to the record of horses' performance in the race. While there was debate over whether data rights existed, the conclusion was that horsemen should make it part of their contracts with racetracks, which in turn would negotiate with the data-collection system.

“These are questions that you have to ask now,” Shirley said. “Because if you don't, five years from now, these systems will be running and whatever claim to the property rights of horse owners in this matter, they'll be gone.”

Putting the “We” in Welfare…

The convention kicked off with Dr. Jennifer Durenberger, the New York Racing Association's chief examining veterinarian and operator of the Racing Matters consulting business, presented a pragmatic view of why horse racing must embrace racehorse welfare if the industry wants to thrive, let alone survive.

Durenberger said horse racing is different than Ringling Bros. or Sea World because of the massive employment and economic impact, statistics that many people don't realize. “Know your numbers. Talk about those numbers,” she advised.

Noting that most of Americans are animal lovers, but their frame of reference is pets rather than use animals, she said: “Listen and respond to concerns, don't be afraid to make change where needed.”

Durenberger urged everyone in racing to be an ambassador for the sport, including using social media. Example: she tweeted on Aqueduct's Gotham Day: “… when horse claimed, new groom will find old groom and ask about favorite treats and toys so horse can feel right at home in new barn.” She said the tweet got more response than any of the New York Racing Association's posts that day.