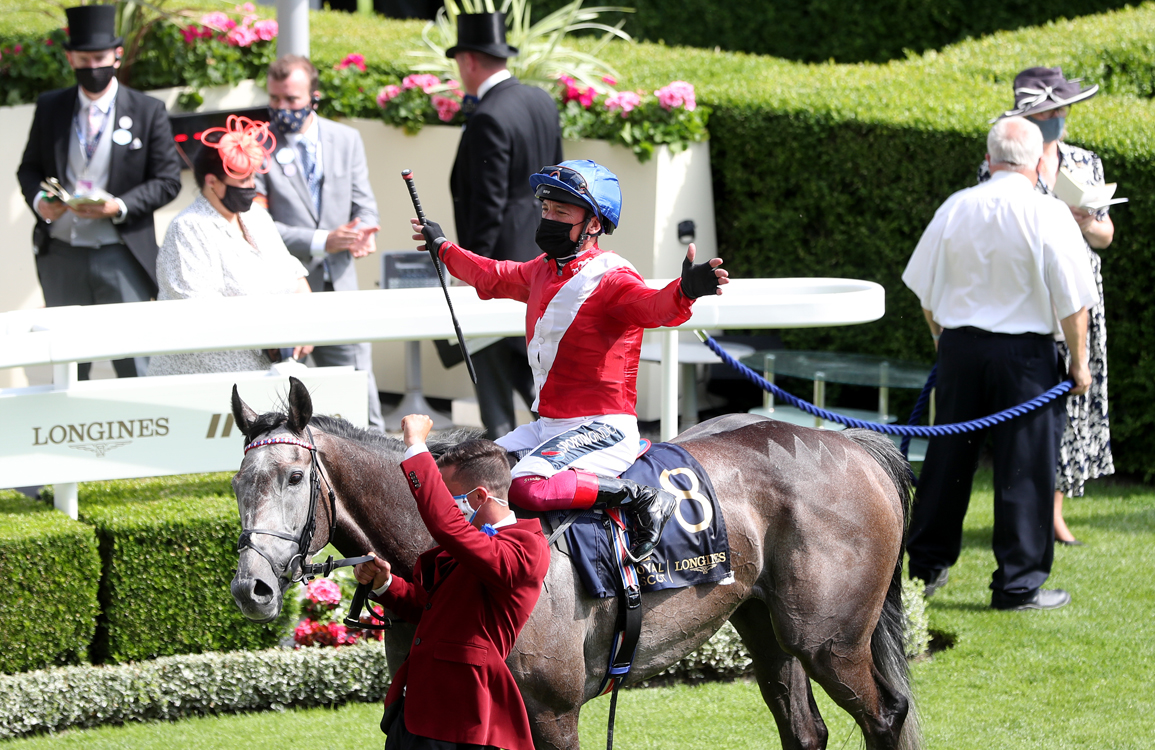 In hindsight, a starting price of 22-1 on a Cheveley Park Stud-owned filly trained by the Gosdens and ridden by Frankie Dettori at Royal Ascot was bordering on the ludicrous and despite her form deficiencies Indie Angel (Ire) (Dark Angel {Ire}) stepped up to make a mockery of those odds in Wednesday's G2 Duke of Cambridge S. Since Palace Pier (GB) (Kingman {GB}) exited the stall closest to the stand's side in the meeting's opening G1 Queen Anne S. the day before, all bar one of the races staged on the straight track had fallen to horses also drawn highest with the other winner only three off that fence. Whether there is a genuine bias near the stand's rail remains to be seen, but Indie Angel likes her space and so exiting from stall 12 of 12 was a real benefit here. Freshened up since finishing fourth behind Lady Bowthorpe (GB) (Nathaniel {Ire}) in the nine-furlong G2 Dahlia S. at Newmarket May 2, the winner whose portfolio boasted just a listed win in the Fleur de Lys Fillies' S. over a mile on Lingfield's Polytrack in October was steadied in rear early. Allowed to coast into contention approaching two out, the grey was in front soon after and able to dominate the closing stages to score by 2 1/2 lengths. Lady Bowthorpe, who came up the centre along with the 11-4 favourite Queen Power (Ire) (Shamardal), won the tussle for the bridesmaid's role by a short head but was always fighting a losing battle overall. “I'll be honest with you, that was unexpected,” Dettori said after his 75th Royal winner. “She's got ability, but everything has to fall right for her. She needs cover, a fast pace and plenty of room. She was too free with me at Newmarket last time, so I didn't know what to expect but today was a good day and she just took off.”

Initially restricted to handicaps over seven furlongs and a mile last term, Indie Angel garnered a brace of wins at Newmarket in July and at Salisbury the following month before being tried in Sandown's G3 Atalanta S. in late August. Eighth there, she was disappointing with no obvious excuses when subsequently seventh in a competitive course-and-distance handicap in September. By the time she tackled the Fleur de Lys, connections had found the key to her and with Frankie keeping her separate from the rest and looping the field she was able to gain a breakthrough black-type success. Penned against the rail for most of her return to the Polytrack for that venue's seven-furlong All-Weather Fillies' and Mares' Championships Conditions S. Apr. 2, she flopped when fifth as the 4-5 favourite there and despite being kept isolated in the Dahlia was still a soundly-beaten 3 1/4-lengths fourth.

While it is easy to see why the punters had given up on her, she was able to make a step forward as older fillies from this yard can do in what amounted to a perfect storm of draw, ground, pace and the fact that both Lady Bowthorpe and the Dahlia runner-up Queen Power were racing under penalties. Solid yardstick Lavender's Blue (Ire) (Sea the Stars {Ire}), who had beaten her by 2 3/4 lengths when third in the Dahlia, was four lengths behind her in this and the way she tracked and brushed aside Champers Elysees (Ire) (Elzaam {Aus}) suggests it would be naive to put this down to mere track bias. She was the second of three winners for her sire in two days at the meeting, sandwiched in between Berkshire Shadow (GB) and Real World (GB), as the Dark Angel success story gathers further momentum.

Gosden, who won this 12 months ago with Nazeef (GB) (Invincible Spirit {Ire}), commented, “In fairness, she won very well last backend but it went a little wrong and I probably ran her before she had come to herself in the spring. She had a little complication in her last race, but we knew she could be competitive with the top fillies. To say that she'd win by two-and-a-half lengths would have been wishful thinking, but she relaxed beautifully and she's bloomed. She looked a different filly today than when we last ran her back in May.”

Looking ahead, the senior member of the Clarehaven partnership added, “She's now won a group two, so maybe you start trying to climb even higher up the ladder. We won it last year and there are nice races like the [G1] Sun Chariot and the nice fillies' race [the G1 Falmouth S.] at the July meeting for her, so those are possibilities. Right now, we're savouring this moment.”

Lady Bowthorpe's trainer William Jarvis was inclined to blame the fast surface for her eclipse. “All credit to the winner, who was very impressive, but I feel easier ground would have suited us better,” he said of the runner-up. “When a filly is running as well as she is, my inclination is not to give her a break. She's in the [July 9] Falmouth, but ideally I would love her to try at a mile and a quarter on decent ground in the [July 29 G1] Nassau [at Goodwood], with the [G1] Sun Chariot a possibility longer term.” Sir Michael Stoute said of Queen Power, “She's a model of consistency, that's for sure, and I guess the trip was a little short of her best.”

Indie Angel, who was a 600,000gns purchase at the Tattersalls December Foal Sale, is out of the Listed Silver S. winner and G3 Prix d'Aumale third Indigo Lady (GB) (Sir Percy {GB}), who is kin to the Listed Rockingham S. winner Prism (GB) (Spectrum {Ire}). The third dam Simply Gorgeous (GB) (Hello Gorgeous) is also the ancestress of the G1 Premio Roma hero Imperial Dancer (GB) (Primo Dominie {GB}) and the G3 Blue Wind S. winner and G1 Nassau S. runner-up One Voice (Ire) (Poet's Voice {GB}), as well as being a half-sister to the G1 Irish Oaks heroine Give Thanks (GB) (Relko {GB}) whose own descendants are headed by the G1 1000 Guineas winner Harayir (Gulch). Also hailing from the family of the G1 Epsom Derby hero and sire Teenoso (Youth), Indigo Lady has an unraced 2-year-old filly by Churchill (Ire) named Miss Clementine (Ire) who was bought by BBA Ireland and Ed Dunlop Racing for 90,000gns at the Tattersalls October Yearling Sale Book 1.