Dark Angel's Harry Angel Gets His Revenge In the July Cup 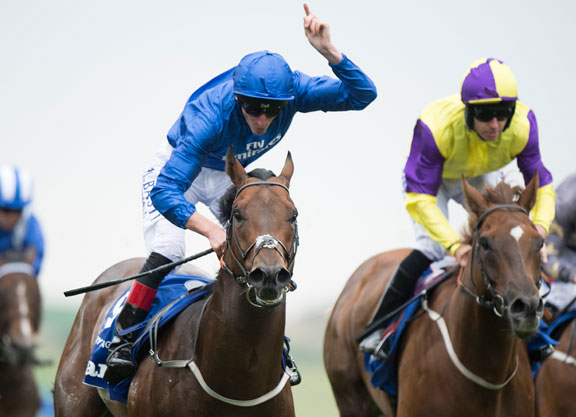 Ground down by Caravaggio (Scat Daddy) in Royal Ascot's G1 Commonwealth Cup June 23, Godolphin's acquisition Harry Angel (Ire) (Dark Angel {Ire}) came back from the canvass with steel in his veins to comprehensively reverse that form in Saturday's G1 Darley July Cup at Newmarket. Joined by Ballydoyle's Intelligence Cross (War Front) on the front end as he had been at Ascot, the 9-2 shot had his blood up once more but this time had plenty left to shake off that rival inside the final quarter mile. Powering through the closing stages as the slow-starting 10-11 favourite Caravaggio failed to make serious inroads, Harry Angel hit the line strong with 1 1/4 lengths to spare over last year's winner Limato (Ire) (Tagula {Ire}), with the outsider Brando (GB) (Pivotal {GB}) a half length away denying Caravaggio a place in the frame by a short head. “He'd have won last time without a shadow of a doubt and I knew he was the best, but it was a little bit unfortunate the way the race turned out,” jockey Adam Kirby commented. “He had no right to finish second in that race and to be fair to him it flung him forward. He's gone from boy to man with every race and I can't express how good he is.”

Harry Angel had his issues with the starting stalls during his 2-year-old days, but they did not stop him winning the G2 Mill Reef S. as a maiden at Newbury in September and his comeback effort when 1 1/2-lengths second to Blue Point (Ire) (Shamardal) giving him four pounds in the May 3 G3 Pavilion S. at Ascot marked him as a serious prospect for the major sprints. Taking a leap forward by breaking the course record in the six-furlong G2 Sandy Lane S. at Haydock May 27, he allowed himself to be drawn into a slogging match with Intelligence Cross in the Commonwealth Cup and with his guard dropped opened himself up to a late assault from Caravaggio. Clive Cox had talked about the way he had emerged from that encounter and the money spoke for him despite the significant sums lumped on Ballydoyle's great hope.

Whereas Intelligence Cross had spoilt his party at Ascot, Harry Angel refused to allow him to get to him this time even though he tended to over-race again. Ryan Moore tracked Limato after missing the kick, but they were always playing catch-up and Caravaggio was relying on the leader caving in and his turn of acceleration proving as effective as it had at the Royal meeting. By the furlong pole, it was clear that neither situation was unfolding and the grey merely plugged on towards the stand's side as Harry Angel roared on in isolation.

Clive Cox has his eye on the Sept. 9 G1 Haydock Sprint Cup now. “He's always been special, but he's taken kid gloves to get going,” he said. “We always hoped he was group 1 material and he is. I'm so pleased to get this for Sheikh Mohammed on his birthday and am so pleased for my team. It was really funny, but when he was beaten at Ascot Adam was disappointed and the look in the horse's eye coming off the track there seemed to say, 'okay guys I'm getting this now'. I've not needed an alarm clock in the morning since I got this horse and I was very confident coming here.”

Limato's trainer Henry Candy was offering no excuses afterwards. “I think Harry Angel is a very good horse, but Harry Bentley was very positive and said he felt as good as he ever,” he said. “He moved well on the ground and did everything right, it's just that Harry Angel went quicker. There will be no more five furlongs for him. It will be the Sprint Cup if it's dry and the [Oct. 1 G1 Prix de la] Foret if it's dry.” Brando's handler Kevin Ryan was relieved to see his stable star come back to his best after a tame display in the G2 Duke of York S. and said, “He could have done with a bit more cut in the ground. The obvious race for him would be the [G1 Prix] Maurice de Gheest [at Deauville Aug. 6]. He would have got another furlong today. I would like to come back for Champions Day at Ascot.” Aidan O'Brien took Caravaggio's first defeat on the chin. “He ran very well. Ryan said he was a little bit slow out the gates and that probably left him a bit on the back foot,” he commented. “I'm not making any excuses.”