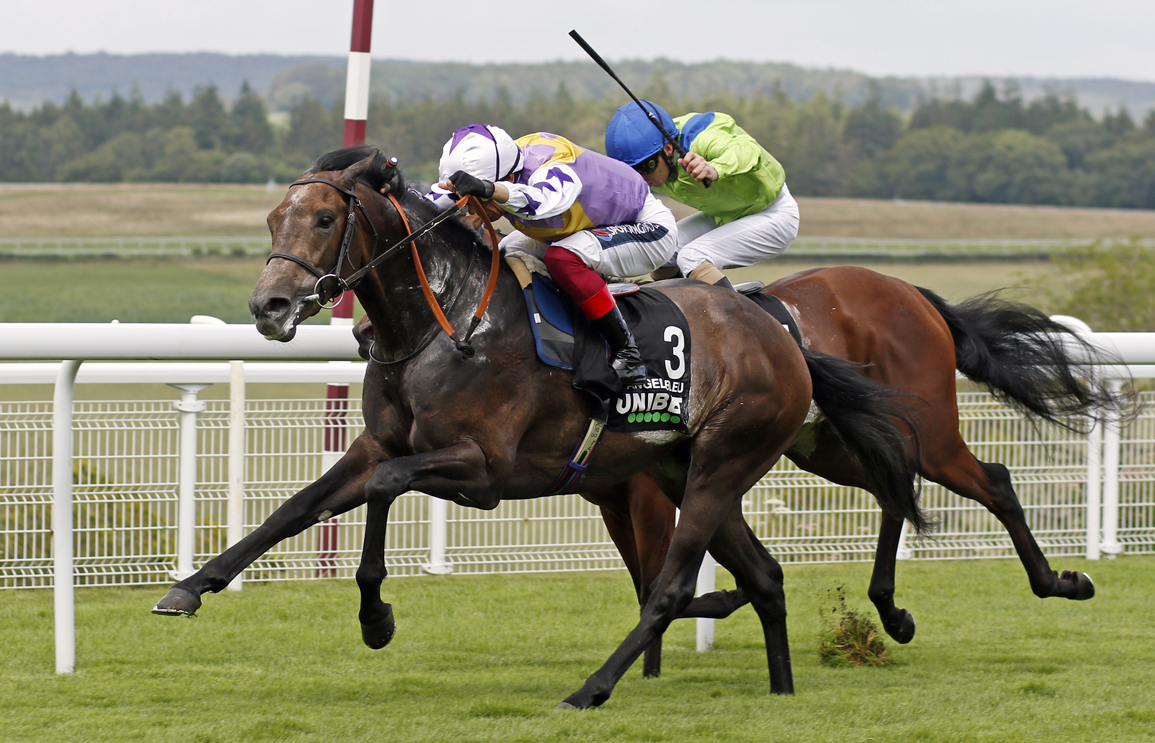 With overnight soft-ground conditions deteriorating to heavy, Tuesday's G2 Unibet Vintage S. was shorn of G2 July S. victor and likely protagonist Lusail (Ire) (Mehmas {Ire}) on a card struck by multiple scratchings. Step forward Marc Chan's Angel Bleu (Fr) (Dark Angel {Ire}), who followed up a one-length second in Saturday's Listed Pat Eddery S. to post a career high in Glorious Goodwood's day one juvenile feature. The 10-3 second choice and Ralph Beckett trainee had previously finished 13th behind the reopposing Berkshire Shadow (GB) (Dark Angel {Ire}) when contesting Royal Ascot's June 15 G2 Coventry S. and raced in fourth through halfway as that rival settled at the tail of the field. Making continued headway in the straight, he quickened smartly for his challenge entering the final furlong and was ridden out to withstand the late surge of 13-8 favourite Berkshire Shadow by 3/4-of-a-length for a career high.

“[Last] Saturday [at Ascot] went well, although he was a little keen and Frankie [Dettori] got off him and said he thinks the horse needs a little break,” explained trainer Ralph Beckett. “I had a chat with the owners and we decided that we should geld him, give him a holiday and send him to Hong Kong, where the owner has a permit to run horses, in the autumn. However, he bounced up the yard on Sunday morning so I told the owner that I think we should declare for Tuesday and I could hardly believe my luck when I saw the rain coming down overnight. I am not sure America would suit him as he likes a bit of juice. He is 2-out-of-2 on soft ground and I would say that we would maybe think about the [G1] Dewhurst S. and [G1 Vincent O'Brien Goffs] National S. now.”

Dettori added, “He was sweaty and keen when I rode him on Saturday so I told Ralph to give him a break as he was a bit over the top. I told [owner] Marc Chan that I'd told Ralph to give him a break and then Ralph calls me Sunday morning saying he's declared him for Goodwood on Tuesday. I wonder what Marc thinks of me after the horse goes and wins as well. Horses make a fool of you, but a combination of running round the turn and soft ground made a difference. He loved it.”

Reflecting on the performance of runner-up Berkshire Shadow, Oisin Murphy said, “He relaxed very well, but the pace was slow. He took a while to wind up and, when he did get going, he hit the line really well. He probably wants better ground and is a miler in the making.”