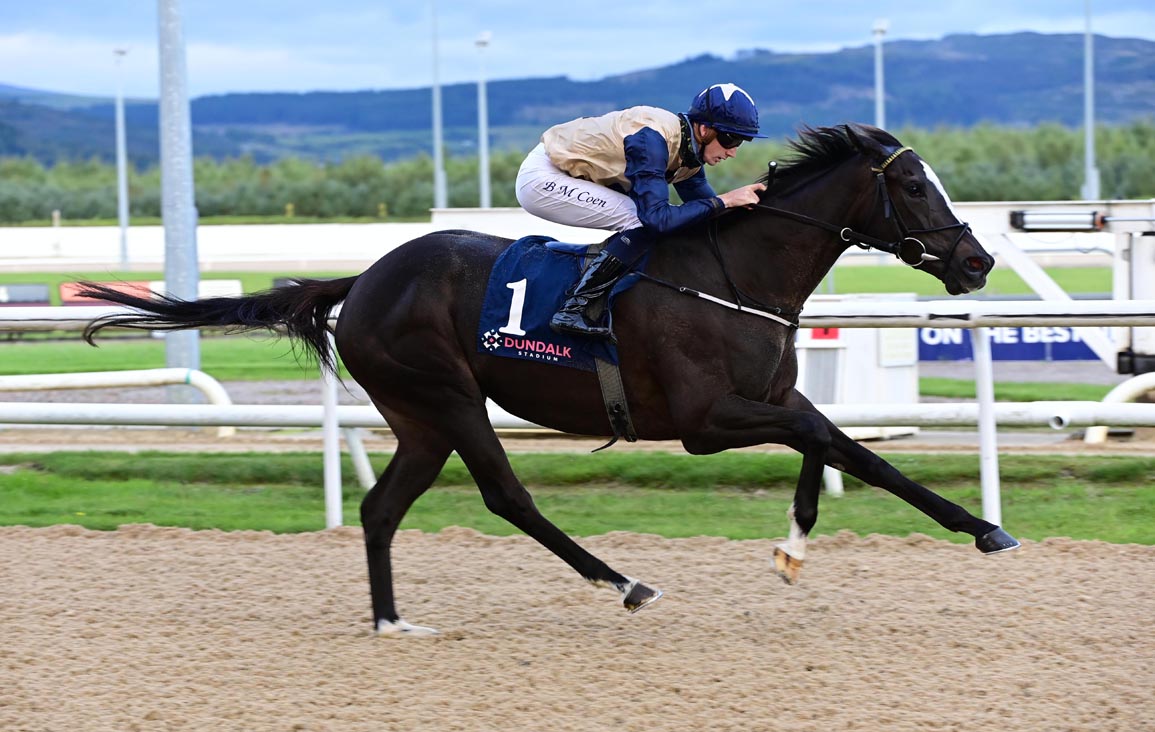 Dundalk's Irish Stallion Farms EBF Fillies Maiden had the feel of a must-watch race beforehand and Friday's seven-furlong contest lived up to expectations playing host to a new TDN Rising Star in Newtown Anner Stud Farm's Angels Wrath (Ire) (Dark Angel {Ire}). Flaunting her wares in a barrier trial here prior to this debut against some smart yardsticks, the 9-2 shot was restrained in mid-division early showing keenness under Ben Coen. Looming with menace when pulled wide in the straight, the Johnny Murtagh-trained homebred showed sharp acceleration to hit the front with a furlong remaining and despite veering left soon after dominated fellow newcomer Kitty Kitana (GB) (Bobby's Kitten) to win by 3 1/4 lengths. There was 1 1/4 lengths back to Ballydoyle's well-supported 2-1 favourite West Coast (Ire) (Dark Angel {Ire}) in third, with others such as the proven Livia Celeste (Ire) (Galileo {Ire}) and the newcomer Lustre (Ire) (Galileo {Ire}), the full-sister to Cliffs of Moher (Ire), well beaten in fifth and 10th respectively.

“She won a barrier trial a way back and was keen then, so I wanted to get her settled and she did things right today,” Coen explained. “She was still plenty green, so there's a lot to work on. We liked her coming here, as she quickened very smart in her barrier trial and that experience was a big help to her. Johnny's improve no end from them and I probably would have been disappointed if I wasn't bang there. She really galloped out strong and took a bit of pulling up too. She has plenty of options and I'm looking forward to her. She has a huge frame, so next year will be her year and anything that comes this year is a bonus.”

Angels Wrath, who becomes the fourth TDN Rising Star for her sire, was offered at the Goffs Sportsman's Yearling Sale 12 months ago, but came back to her breeders after failing to make her reserve. She is the third foal out of the useful Cailini Alainn (Ire) (Danehill Dancer {Ire}), whose career-best came when winning a 13-furlong handicap at Leopardstown in 2015. She is a half to Dark Crusader (Ire) (Cape Cross {Ire}), winner of York's Melrose H. over the Ebor trip and runner-up in the G3 Give Thanks S. before producing this year's other TDN Rising Star Duke de Sessa (Ire) (Lope de Vega {Ire}). Another of Cailini Alainn's half-siblings is Naughty Or Nice (Ire) (Fastnet Rock {Aus}), who was also a strong stayer who took the 13-furlong Listed Yeats S. and finished third in the 14-furlong G3 Stanerra S. This is also the family of the GI Gulfstream Park Breeders' Cup H. and G2 King Edward VII S. hero Subtle Power (Ire) (Sadler's Wells) and of Mutahadee (Ire) (Encosta de Lago {Aus}) who was runner-up in the G1 Dubai Duty Free. Cailini Alainn's yearling filly is by Tamayuz (GB).