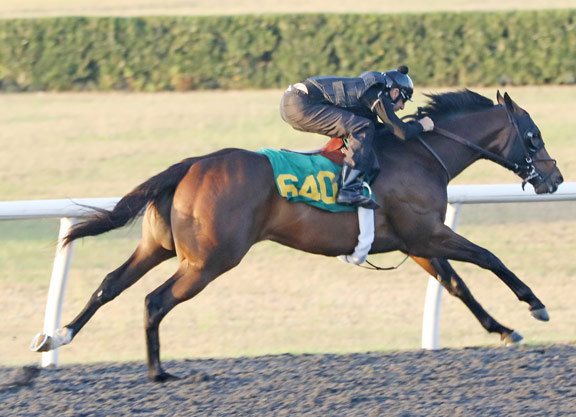 A Daredevil colt (Hip 640) breezed the fastest quarter at the third and final day of the OBS March Breeze show Saturday, covering the distance in :20 3/5. Two others tied for the fastest furlong at :9 4/5.

Hip 640 is consigned by Ciaran Dunne's Wavertree Stables, which also sent out Friday's fastest quarter-mile worker in Hip 237, a daughter of American Pharoah, who went in :20 2/5. Dunne purchased the Daredevil colt for $30,000 at the Fasig-Tipton October Yearling Sale.

The fastest furlong workers were Hip 477 (video) and Hip 514 (video), who both went in :9 4/5. Consigned by Golden Rock Thoroughbreds, Hip 477 is a son of Will Take Charge, who was purchased by Golden Rock for $10,000 at the Fasig-Tiptn July Yearling Sale. Hip 514 is a Shanghai Bobby filly consigned by L.G. as agent, who purchased the horse on behalf of Gerardo Romero for $27,000 at Keeneland September.

The OBS March Sale kicks off Tuesday at 10:30 a.m. and concludes Wednesday.