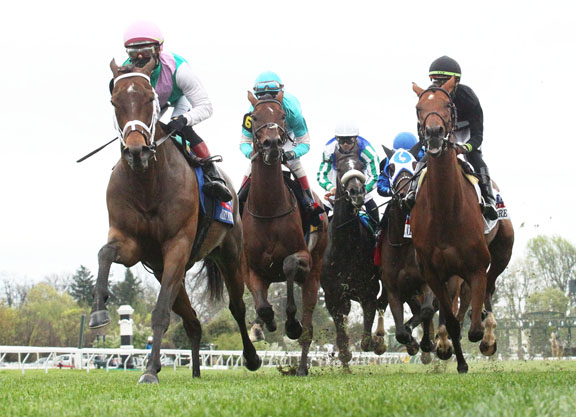 Looking for a seemingly elusive Grade I badge, Juddmonte Farms' Juliet Foxtrot (GB) (Dansili {GB}) finally broke through the glass ceiling, posting a career high win in Saturday's GI Coolmore Jenny Wiley S. at Keeneland. The victory represented Juddmonte's 16th graded stakes win at the Lexington oval. It is also the fourth victory in the race for Juddmonte, whose previous triumphs came with Bobby Frankel trainees Tates Creek in 2002 and Intercontinental (GB) in 2004 and 2005.

Sent off the 8-5 choice for her 2021 debut, the 6-year-old broke sharply and was sent to the fore by Tyler Gaffalione, carving out an initial quarter mile in :24.35 over the rain-saturated turf course. Prompted by an eager Tamahere (Fr) (Wootton Bassett {GB}) and La Signare (Fr) (Siyouni {Fr}) down the backstretch, the homebred continued to show the way through a half in :49.45. Spurting clear approaching the quarter pole, the English-bred was given her head in the stretch, and despite Tamahere's best effort, the favorite rolled home a two-length winner. La Signare held third.

“She really relished the ground,” said winning rider Tyler Gaffalione. “They said that they worked her a couple weeks back over a turf course similar to this and they said she just ate it up. As soon as she broke, I could feel that I had a ton of horse and she was loving every bit of it. I just put my hands down when she broke and she came right back to me. It was an easy ride today.”

Added Juddmonte's Garrett O'Rourke, “I think there was a confidence that she would be able to handle the soft turf, because we had a filly that we knew, [French Group 3 winner] Gaining (GB), that had won here, and we knew Gaining liked the soft turf and they had worked together on soft turf.”

Recording only a single win in eight starts for Charlie Hills overseas, Juliet Foxtrot kicked off her 4-year-old and U.S. campaign with three consecutive victories, including the GIII Modesty S. at Arlington. She hit the board in all three remaining starts that season, including the GI First Lady S. and GI Matriarch S. Last season, she finished sixth in Churchill's GIII Mint Julep S. in May before resurfacing with a third, 1 1/4 lengths behind the victorious Rushing Fall (More Than Ready) in last year's Jenny Wiley. Fourth in the GII Distaff Turf Mile in September, she took a soggy renewal of Pimlico's GIII Gallorette S. before rounding out the season with a close-up third in the latest renewal of the Matriarch in November.

Added O'Rourke, “She has been Grade I-placed and placed in this race last year. It was brave on behalf of everybody at Juddmonte to make the move to keep her [in training] for one more year to try to win that elusive Grade I. This is huge for the mare. She looked absolutely magnificent today, and for as consistent of a performer as she's been, I just think she thoroughly deserves it, which makes it all the more sweet for us.”