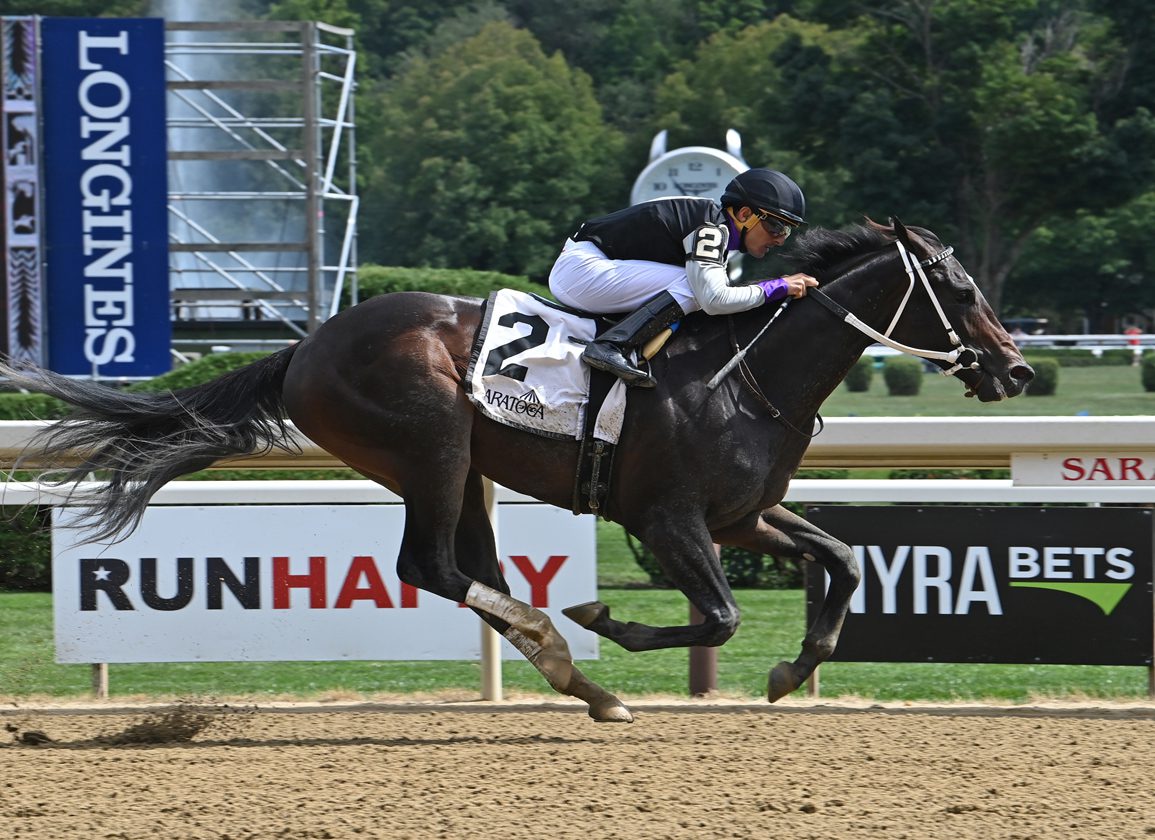 Facing just three rivals here, the 9-5 second-choice trailed the closely bunched quartet in the garden spot as Gulfstream debut winner Super Chow (Lord Nelson) flew through an opening quarter in :21.94. Gulfport, a perfect two-for-two to begin his career, led by a 12 1/4-length win in the Bashford Manor S., was forced to check dramatically beneath Joel Rosario as the pacesetter drifted out approaching the quarter pole. Damon's Mound, meanwhile, was out in the clear while three wide and beginning to make a menacing move to challenge for command.

Damon's Mound hit the top of the stretch in the four path under confident handling by Gabriel Saez, switched to his right lead as they straightened and left the pacesetter in the dust from there to win for fun. Gulfport re-rallied after his aforementioned trouble on the far turn to finish with interest without threatening the winner.

Michelle Lovell, who finished second three times at Saratoga as a jockey in 1993, was saddling her first Saratoga starter as a trainer Saturday. She began training in 2003.

“It was perfect. I was so happy where we were laying where we were tracking,” said Lovell. “And then Gabe couldn't hold him any longer and he just let him creep on up there and make his little move. He did his job.”

Damon's Mound has plenty of options going forward, per Lovell, including the GI Hopeful S. Sept. 5 at the Spa, the GI Breeders' Futurity Oct. 8 at Keeneland and the GIII Iroquois S. Sept. 17 at Churchill Downs.

“It's incredible. All props to the horse,” Lovell said. “He's just awesome and he proved it and spoke for himself. I couldn't be happier for his owners. They're breeders, they [didn't sell him], and they got rewarded for it. I wouldn't have traded him for any horse. I thought he had an awesome chance, and he showed it. I'm glad he did.”

Damon's Mound becomes the second black-type winner and first graded winner for promising freshman sire Girvin. Stroll is now represented by four black-type and four graded winners as a broodmare sire. Damon's Mound is a homebred for the Texas-based Cliff and Michele Love. The Florida-bred is the first foal out of their multiple stakes-placed mare San Antonio Stroll (Stroll). A filly by Girvin of 2021 and a colt of this year by the GI betfair.com Haskell Invitational S. winner are in the pipeline. She was bred back to Girvin for 2023.