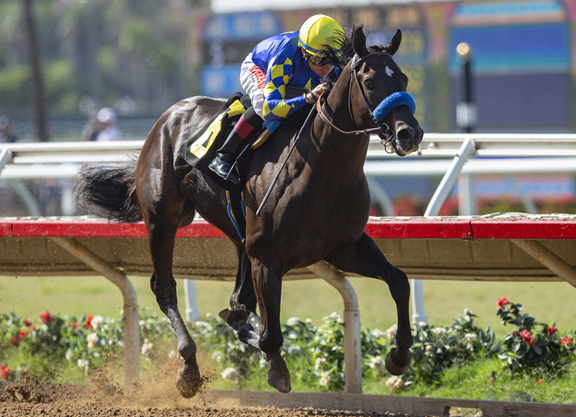 Purely Hot (Pure Prize–Wood Not, Kissing Kris), the dam of Grade I winner Eight Rings (Empire Maker), has been supplemented to Book 1 of the Keeneland November Sale. The 11-year-old mare is in foal to Union Rags and sells as Hip 274G with Taylor Made.

“We are excited to offer another exceptional broodmare in Purely Hot,” WinStar Farm President, CEO and Racing Manager Elliott Walden said. “Two years ago, we sold the dams of four Grade I winners at Keeneland and hope to replicate their success.”

Purely Hot won 12 races, including the GIII Whimsical S., and earned $426,905. She was purchased by WinStar for $250,000 in foal to Bodemeister at the 2014 Fasig-Tipton November Sale. Eight Rings, a $520,000 KEESEP buy, earned the 'TDN Rising Star' nod for his debut win and romped by six lengths last out in the GI American Pharoah S. Sept. 27. He is one of the early favorites for the GI Breeders' Cup Juvenile.

“Adding Purely Hot was a massive addition for our consignment,” Taylor Made's Mark Taylor said. “She gives me the same feeling as the dam of American Pharoah when we sold her at the end of his 2-year-old campaign.”