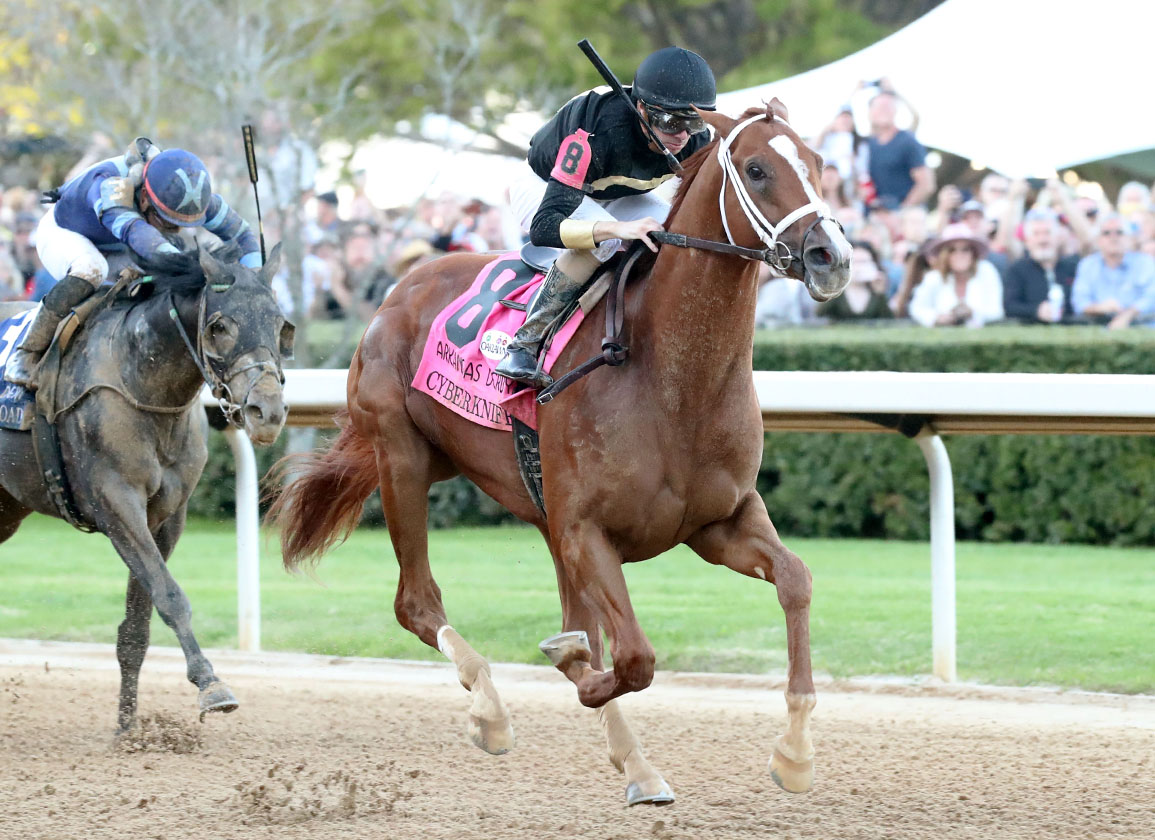 Gold Square LLC's Cyberknife (Gun Runner) exited his win in Saturday's GI Arkansas Derby in fine shape and is expected to ship to Louisville Tuesday to continue preparations for the May 7 GI Kentucky Derby. The colt, who was making his second stakes appearance after a sixth-place effort in the Jan. 22 GIII Lecomte S., continued a trend of frisky behavior Saturday at Oaklawn when dumping jockey Florent Geroux in the post parade.

“I was too far away to do anything about it, but Florent was able to jump up on him by himself,” Cox said. “He's feeling good [Sunday]. It's a nice, crisp morning and if you watched him walk around here, you definitely wouldn't think he ran a mile and an eighth yesterday. He's got a lot of energy.”

Cox also trains lightly raced Zozos (Munnings), who earned a spot in the Kentucky Derby with a runner-up effort in the Mar. 26 GII Twinspires.com Louisiana Derby at Fair Grounds.

Arkansas Derby runner-up Barber Road (Race Day) is on target to be the first Kentucky Derby starter for trainer John Ortiz, but the colt will remain at Oaklawn for the time being.

“Right now, we don't have any plans of moving him,” said Ortiz. “He sprung a shoe, so we're going to get that fixed first and address that. He got banged around there down the stretch, but he's just a tough little horse.”

Secret Oath (Arrogate), third while facing colts for the first time in the Arkansas Derby, will return to her own division for the May 6 GI Kentucky Oaks.

Secret Oath made a sweeping six-wide move on the second turn to reach contention before weakening late to finish three-quarters of a length behind Barber Road.

“She was tired,” trainer D. Wayne Lukas said Sunday. “That move she made was a terrific move for a filly at this stage of her career, to keep going. Watching it live, I thought she's probably going to hang a little bit here. She almost had to. It was a monster move. But when she came back, she was tired. The beautiful thing is we've got five weeks now. I said that before the race and now it gives us some direction. We're not thinking Derby. Now, we're focused on what we should be–the Oaks–and we've got five weeks to get back in form.”

Lukas said Secret Oath and stablemates Ethereal Road (Quality Road) and Ignitis (Nyquist) will ship Tuesday to Churchill Downs. Ignitis, third in the Smarty Jones S., is pointing for the Apr. 8 $400,000 Lafayette S. at Keeneland. Ethereal Road, the GII Rebel runner-up, is scheduled to make his next start in the Apr. 9 GI Toyota Blue Grass S. Ethereal Road has 20 points to rank 24th on the Kentucky Derby leaderboard.