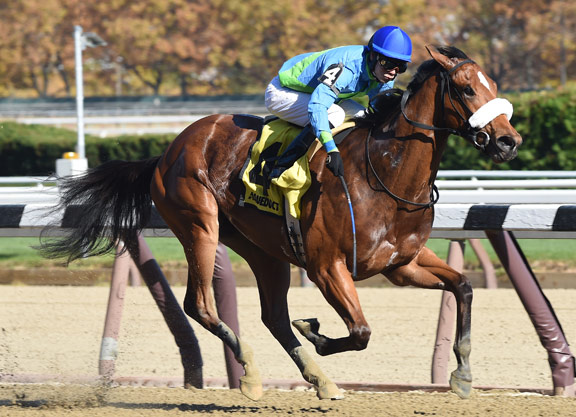 Big World became the first black-type winner for her freshman sire (by More Than Ready ) with a narrow score in the GIII Tempted S. Challenging Banree for the lead through an opening quarter in :24.05, Big World was just a nose in front of that rival as she loped along the rail through a half in :47.85. Banree stubbornly kept after the bay in the lane, but Big World inched a bit further ahead each time and held off a late run from Flora Dora to score her second straight success. Banree stayed on well for third. Heavily favored Welcoming (Tapit) failed to fire and checked in fifth.

“I didn't give [Jose Ortiz] any instructions at all,” winning trainer Tony Dutrow remarked. “I told him she's an easy ride and he would know what to do when the gates opened. I noticed the speed was looking at her and they were going soft, so he took advantage of it.”

“It was a little weird. On paper, it looked like there was a little more speed in there, but my filly broke very well and I noticed it was going easy in front, so I took advantage of it,” Ortiz commented. “We went :24 and :47 and that's pretty good. When I asked her to go, she responded very well. I want to thank all the connections for the opportunity. She's pretty good.”

Third behind “TDN Rising Star” Tonasah (Malibu Moon) on debut at Belmont July 2, Big World completed the trifecta once again at Sarartoga Aug. 2 after having the misfortune of running into “TDN Rising Star” Rachel's Valentina (Bernardini), who won the GI Spinaway S. a month later and finished second in the GI Breeders' Cup Juvenile Fillies Oct. 31. Earning her diploma last time in a seven-panel affair upstate Sept. 6, the juvenile was further flattered when that race's runner-up and $1.9 million OBS record setter Inheritance (Tapit) earned “TDN Rising Star” honors next time out. The winner's dam produced a Creative Cause colt in 2014 and a full-brother to the winner this year before being bred back to Trappe Shot.