Curragh Conjures Up An Oaks Classic 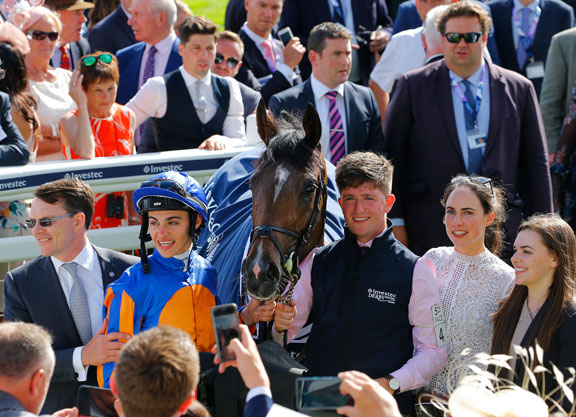 Forever Together and connections after the Oaks | Racing Post

Saturday's G1 Darley Irish Oaks may be low on numbers and overseas interest, but the right middle-distance fillies are all there nonetheless with Magic Wand (Ire) (Galileo {Ire}) leading the customary Ballydoyle charge in the main event. Only fourth in the June 1 G1 Epsom Oaks after the localised storm, she has since readily reversed form with the runner-up Wild Illusion (GB) (Dubawi {Ire}) in the G2 Ribblesdale S. at Royal Ascot on June 21, demonstrating why Ryan Moore sided with her in the Classic. Moore has yet to win a Classic this year, with a miss in the 2000 Guineas due to being on U.S. duty, and it will be important to the consummate professional that he gets it right on the half-sister to the 2013 Irish Oaks winner Chicquita (Ire) (Montjeu {Ire}). Forever Together (Ire) (Galileo {Ire}) left her trailing at Epsom, but had been beaten 3 1/2 lengths in the May 9 Listed Cheshire Oaks on the faster ground that Magic Wand seems to relish. Subsequently second in the G1 Pretty Polly S. over 10 furlongs here on July 1, Forever Together has cheekpieces fitted for the first time here as Donnacha O'Brien bids for Classic number four in 2018. “Magic Wand seems to be in good form since Ascot. Obviously she likes a nice bit of ground. It was nice in Ascot,” Aidan O'Brien said. “Forever Together is in good form as well. She ran a nice race the last day and she looked like a filly that will appreciate going further. She's back to a mile and a half like the Epsom Oaks again. I don't think the ground is too important with her. I just think she probably stays very well.”

British interest is represented solely by the Tsui family's Sunderland Holding's Sea of Class (Ire) (Sea the Stars {Ire}), who encounters a wholly different test to those presented in her two 10-furlong listed wins at Newbury in the May 19 Haras De Bouquetot Fillies' Trial S. and June 14 Abingdon S. Trainer William Haggas is hopeful. “Sea of Class is in good form, we are very happy with her and she pleased us at Newmarket last week,” he commented. “We think a mile and a half is the trip she wants now and The Curragh should suit. She is out of a Hernando mare and there is plenty of stamina in the family, but she has got speed as well, so we are excited.”

Aidan O'Brien's charges may have been generally slow to come to hand this term, but the statistic that states they have won eight of the 14 group races staged at The Curragh so far in 2018 speaks for itself. In the G2 Friarstown Stud Minstrel S., the stable brings St Patrick's Day (Pioneerof The Nile) back into action after the full-brother to American Pharoah put up such an encouraging European debut effort when third in the Listed Celebration S. at a mile here on June 30. “He seems to be in good form and we've been happy with him since his last run,” O'Brien said. “We're looking forward to seeing him run again. We thought that he would progress from his first run.” In the G3 Jebel Ali Racecourse and Stables Anglesey S., Rosegreen look to 'TDN Rising Star' Just Wonderful (Dansili {GB}), who was only 14th when occupying 2-1 favouritism in Royal Ascot's G3 Albany S. on June 22. “She got a little bit of time since Ascot and she's just ready to start back again,” the master of Ballydoyle said. “Maybe the whole occasion just came a little bit too quick for her at Ascot.” Any rustiness may be exposed by Khalid Abdullah's Viadera (GB) (Bated Breath {GB}), who captured a six-furlong maiden on her racecourse introduction here June 30.

Over at Newbury, the G3 bet365 Hackwood S. sees another of Juddmonte's promising types Equilateral (GB) (Equiano {Fr}) bid to atone for a disappointing 12th in the G1 Commonwealth Cup at Royal Ascot June 22. Travelling like the winner for much of that contest, the impressive Doncaster conditions scorer is held in the highest regard by trainer Charlie Hills and he is hoping the 3-year-old can leave his flop well behind. “He returned from the Commonwealth with a dirty scope, it was filthy, so he had an excuse,” he explained. “He's done a couple of pieces of work since then which have been very encouraging. This looks a nice little spot for him. It obviously means taking on older horses, but there are a few there who ran nice races at Ascot. He was disappointing at Ascot, but I've always thought he was up to that level.”