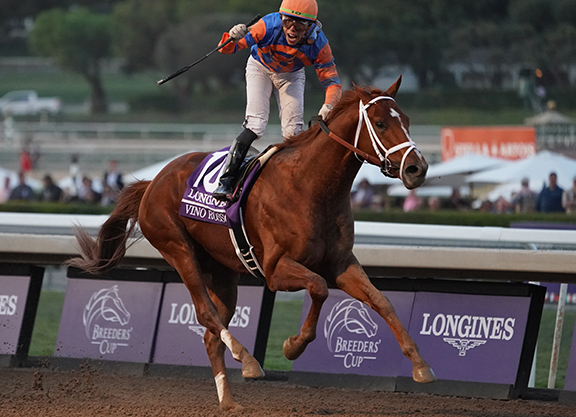 ARCADIA, CA – The wine will be flowing in Southern California tonight.

As previously announced, Vino Rosso will begin his career at stud at Spendthrift Farm in 2020.

The Classic field of 11 was away in good order to the roar of 67,811 as the sun began to set beneath the stunning backdrop of the San Gabriel Mountains.

The striking chestnut Vino Rosso, who had tipped his hand in the mornings at Santa Anita throughout the week, broke well from post 10 and chased from a three-wide fourth as GI Preakness S. winner War of Will (War Front) led through fractions of :23.09 and :47.16.

MGISW McKinzie, who had to tap on the brakes rounding the first turn, made the first move to hit the front after sitting a stalking trip as Mongolian Groom (Hightail) and War of Will were the first to blink rounding the far turn.

Vino Rosso, meanwhile, began to rumble beneath Irad Ortiz, Jr. with an eye-catching sweeping move of his own approaching the quarter pole and the stage was set.

Or so it seemed.

Vino Rosso, off as the 9-2 third choice, quickly inhaled favored McKinzie as that one's tail began to swoosh into the stretch, and with Vino Rosso running up the score late, track announcer Frank Mirahmadi put it into words perfectly.

“Vino Rosso–like father, like son. The son of Curlin romps in the Longines Breeders' Cup Classic!”

The race was marred when GI Awesome Again S. upsetter Mongolian Groom was pulled up abruptly in deep stretch. He was vanned off with a serious fracture to his left hind ankle and was later euthanized.

“It really wasn't about the last race,” Pletcher said. “It was about winning a Classic, especially for Mike and Vinnie and their families. We just felt like the last five weeks the horse had been training unbelievably well. I've been anxious for the race to get here and just nervous about it. It's been a while since I came into a race of the magnitude with a horse doing this well. Every indication in his works, the way he shipped in, the way he galloped over the track. Everything was there indicating he was sitting on a lifetime best performance. So you always worry, did we ship in at the right time, but every indication was he was sitting on a big one and when it actually happens, it's very rewarding, very fulfilling, very emotional. We always felt he would be a better 4-year-old than 3-year-old. Just happy it turned out to be right.”

Repole added, “This is unbelievable. Indescribable. We've won so many graded stakes, but this one feels different. Winning with Uncle Mo [in the Juvenile] was amazing and I knew it would take a special race to get a feeling even bigger than that. This is the one. This is the pinnacle. I think it's more that we had unfinished business [than vindication]. I remember saying that that loss will make this win feel 10-times better. And it really did. You have to go through adversity, and that was pretty low, to reach the highest of highs. It's a great feeling.”

Vino Rosso's 4-year-old campaign and career was previously highlighted by a win over a track-and-trip score in the GI Gold Cup at Santa Anita S. May 27.

Vino Rosso began the year with a win in the one-mile Stymie S. at Aqueduct Mar. 9, then was fourth in the seven-furlong GI Carter H. Apr. 6. A well-beaten third in the GI Whitney S. Aug. 3, he outgamed Code of Honor (Noble Mission {GB}) by a nose in the Jockey Club Gold Cup, but was disqualified for interference in the stretch and placed second. Last year's GII Wood Memorial S. winner and GII Jim Dandy S. third-place finisher was off the board in the 2018 GI Kentucky Derby, GI Belmont S. and GI Travers S.

Vino Rosso becomes the second Breeders' Cup winner for the mighty two-time Horse of the Year Curlin, who captured the 2007 GI Breeders' Cup Classic at Monmouth Park. Curlin becomes just the second horse to both win the Classic and sire a winner of the race. Vino Rosso was selected by the eagle eye of the late Jimmy Crupi for $410,000 as a KEESEP yearling. Like Triple Crown hero Justify (Scat Daddy), Vino Rosso was bred by John Gunther, who purchased the mare Mythical Bride for $42,000 at the 2011 KEENOV Sale. Vino Rosso is a half-brother to So Alive (Super Saver), third in this year's GIII Sam F. Davis S. and to the Irish-based juvenile Ramesses the Great (Pioneerof the Nile), a $350,000 Keeneland November weanling turned $575,000 Keeneland September yearling. Vino Rosso's dam Mythical Bride is a half-sister to MGSW and 2014 GI Belmont S. runner-up Commissioner (A.P. Indy) as well as GSW Laugh Track (Distorted Humor), second in the 2013 GI Breeders' Cup Sprint at Santa Anita. Dam of a yearling colt by Uncle Mo, Mythical Bride foaled a full-brother to Vino Rosso this year.