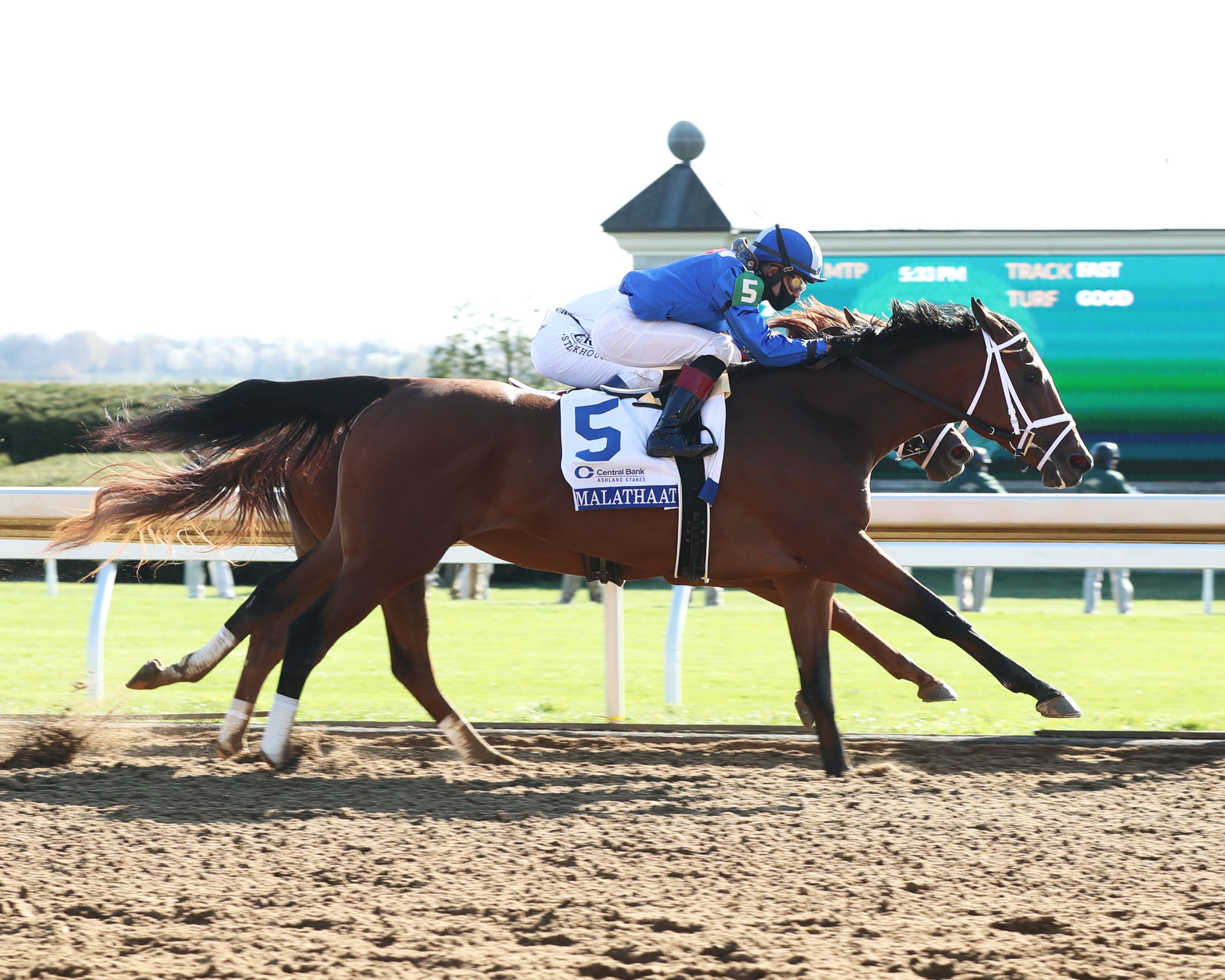 “I can't put it into words,” said an emotional Rick Nichols–Vice President and General Manager of Shadwell–after the race. “I am sure [Sheikh Hamdan] is up there with a big smile on his face looking down on us. We really needed this.”

Already with 10 GI Kentucky Oaks qualifying points to her name, Malathaat picked up another 100 on Saturday.

“I think she might be pretty special,” Nichols said. “We will see if we can get in the Oaks and see what we can get done.”

Purchased for $1,050,000 at Keeneland September–part of $11,070,000 in expenditures at that sale for Shadwell, always among the auction's leading buyers–Malthaat opened her account with a pacesetting victory over seven panels at Belmont last October. She stepped forward with a 7 3/4-length tally in Aqueduct's one-mile Tempted S. Nov. 6, but had been off since annexing the GII Demoiselle S. back in the Ozone Park slop going 1 1/8 miles Dec. 5.

Having wintered at Palm Beach Downs, Malathaat was backed at 3-2 as the narrow second choice behind last year's local GI Darley Alcibiades S. romper Simply Ravishing (Laoban). Away well, the bay was taken back to second last by Rosario as she traveled in the two path. She was pushed along for more after a tepid :48.56 half, and Pass the Champagne caught the eye as she appeared locked and loaded in the pocket, awaiting running room behind the favorite. Pass the Champagne split foes and took a clear lead at the top of the stretch as Malathaat struggled briefly to switch leads. Once she leveled off, however, Malathaat gobbled up ground to get up by a head. GIII Honeybee S. winner Will's Secret (Will Take Charge) rounded out the trifecta from last, while Simply Ravishing trailed the field in.

“She has a beautiful stride,” said Rosario. “This morning talking with [trainer Todd Pletcher], he told me exactly how to ride her. It looked like [Pass the Champagne] was getting away from me but I knew my filly would be there for me.”

George Weaver, trainer of the runner-up, said, “I thought she was a winner when she came off the turn. I know it's a short run to the wire and I was like 'man we've got open lengths.' The wire could not come soon enough and Todd's filly came running. Todd's filly has been training with me at Palm Beach Downs and I know he's very high on her. There is no embarrassment getting beat by her today. First time two turns, I would look for a big improvement next time.”

Trainer Ken McPeek later tweeted that Simply Ravishing “cooled out sound [but] has a minor breathing issue that we are unable to resolve in time for the Kentucky Oaks.”

Pedigree Notes:
Shadwell also won Saturday's GI South African Derby, and took Keeneland's opener with sophomore colt Ghazaaly (Curlin), who cost the same amount as Malathaat at the same sale. Shadwell bought third a Curlin, an $800,000 filly, at KEESEP '19 who remains currently unraced. Malathaat was certainly bred for a big Oaks prep performance–her dam Dreaming of Julia turned in an other-worldly effort in the 2013 GII Gulfstream Park Oaks, winning by 21 3/4 lengths and earning a gaudy 114 Beyer Speed Figure for Stonestreet and Pletcher. Dreaming of Julia was subsequently fourth in that year's Kentucky Oaks.

Malathaat becomes the 14th Grade I winner for her sire, and is bred on the same cross as last year's GI Woodward H. hero Global Campaign and recent GI Santa Anita H. victor Idol. A.P. Indy is now the sire of the dams of no fewer than 30 highest-level winners, including last Saturday's G1 Dubai World Cup winner Mystic Guide (Ghostzapper).