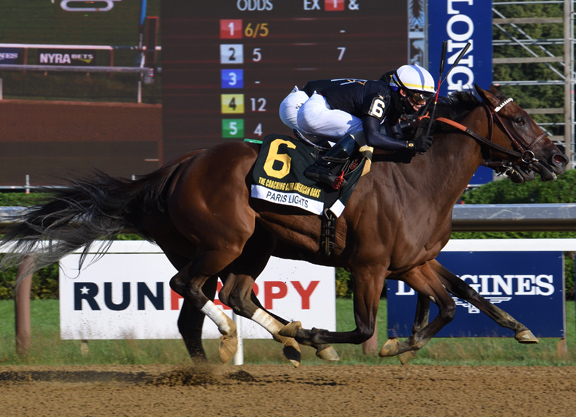 Paris Lights (Curlin), an impressive winner of two straight at Churchill Downs, made her stakes debut a winning one with a ultra-game decision in Saturday's GI Coaching Club American Oaks at Saratoga.

The 2-1 chance pressed runaway Bob Baffert-trained Santa Anita maiden winner Crystal Ball (Malibu Moon) from second through fractions of :24.43 and :47.82, and turned up the pressure as they hit the quarter pole.

Paris Lights and Crystal Ball, both owned by WinStar Stablemates Racing, turned for home on even terms, and after a dramatic stretch duel, it was the former who got there by a head.

It was another 4 3/4 lengths back to Antoinette (Hard Spun) in third. Favored Tonalist's Shape (Tonalist) was checked hard on the clubhouse turn, and after getting rank early, never factored in fourth.

A debut third sprinting in the Gulfstream slop Apr. 26, Paris Lights romped by 6 3/4 lengths while making her two-turn debut in Louisville May 31, then impressively added a first-level allowance there June 27.

After losing a pulsating stretch duel in this race with Elate at the hands of Baffert and Abel Tasman three years ago, it was Hall of Famer Bill Mott who came out on top this time.

“They both fought hard,” Mott said. “Our filly was the best one today and I was very proud of her. She's won her last three. She didn't draw away by 10 [lengths], so you're not going to call her Ruffian just yet, but I'd say she's a pretty accomplished filly for the lack of seasoning. She's gained our confidence that she has some grit and she has some quality.”

As for Paris Lights returning in the GI Alabama S. Aug. 15, Mott said, “I don't see any reason we wouldn't make that her potential goal. We've been lucky enough to win it a couple of times and naturally, I'd like to try it again.”

Pedigree Notes:
Curlin made it two graded winners on Saturday when Paris Lights captured the GI Coaching Club American Oaks approximately 90 minutes after Global Campaign added the GIII Monmouth Cup S. to his tally. Paris Lights and Global Campaign are bred similarly as Paris Lights is out of a Bernardini mare and Global Campaign is out of an A.P. Indy mare (A.P. Indy is, of course, Bernardini's sire). With champions Vino Rosso, Good Magic, Stellar Wind, and 29 other graded winners to his credit, plus 67 black-type winners, Hill 'n' Dale's Curlin is frequently among the leading sires. Paris Lights is the third of his daughters to make a splash in the Coaching Club American Oaks, with Curalina taking the race in 2015 and Point of Honor finishing second last year. Like Paris Lights, Point of Honor is also out of a Bernardini mare, making it 38 stakes winners out of his daughters. Paris Lights is the first foal out of her dam, who also has the unplaced 2-year-old colt Cousteau (Into Mischief), a yearling filly by Distorted Humor, and a colt born this year by Always Dreaming. She hails from the exquisite extended family of blue hen Blush With Pride (Blushing Groom {Fr}), who is her fourth dam.