Curlin's Obligatory Comes From the Clouds to Upset the Eight Belles 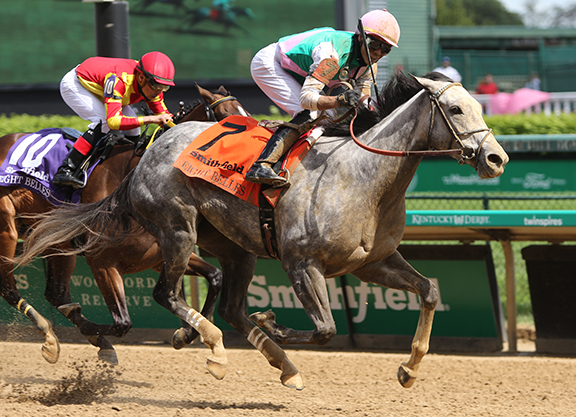 Longshot Obligatory cut back and came flying to run down come-backing GISW Dayoutoftheoffice Friday. Fourth on debut after a rough start sprinting at Belmont in October, the Juddmonte homebred donned cap and gown over a one-turn mile at Gulfstream Feb. 7. She was last seen finishing a somewhat one-paced fourth in the Mar. 20 GII Fair Grounds Oaks behind Travel Column (Frosted), Clairiere (Curlin) and Souper Sensational (Curlin).

Obligatory dropped straight to the back early as last year's GI Frizette S. heroine and GI Breeders' Cup Juvenile Fillies runner-up Dayoutoftheoffice chased a quick pace from third that yielded opening splits of :21.89 and :44.46. The favorite took over heading for home and looked on her way to victory, and Obligatory swung very wide but still had plenty to do. Like a grey blur, Obligatory inhaled foes down the center of the track and blew by Dayoutoftheoffice in the final strides.

“It was just like I planned it,” said winning jockey Jose Ortiz, who had piloted Maxfield (Street Sense) to victory earlier on the card in the GII Alysheba S. “I told [Juddmonte general manager] Garrett [O'Rourke] and [trainer] Bill [Mott] that there was going to be a lot of speed on the rail on paper. I was going to sit on her and give her one good move. The first part was nice and easy. The second part she came running. According to the numbers, and I don't know numbers, but they said she could win the race and they were right. She's a filly that is improving a lot.”

This was the third victory in this event for Mott.

“I think she was a little confused when she ran two turns in New Orleans,” the Hall of Famer said. “She ran a very big effort at Gulfstream, had a little trouble, had to check coming around, you could see visually it was a very good effort. We thought she was good enough to go to the Fair Grounds Oaks, I think she's good enough, but she's green and the two turns confused the heck out of her. Maybe we could find out down the road that she's a better one-turn horse. I think five weeks away, they run the [GI] Acorn. I have no reason to believe she can't get a mile. And sometimes the two-turn deal could be a greenness thing. The pace today turned out good. We both knew there was a tremendous amount of speed in the race. She was able to close into it. She had a good kick. You just hope it didn't take too much out of her, she got the win and I think she earned a ticket into a good race like the Acorn.”

Obligatory is the second foal to race out of Uno Duo, who never raced beyond seven furlongs and was a restricted stakes winner on the Aqueduct inner track. Uno Duo has a 2-year-old filly by Arrogate and a yearling colt by the same late superstar. She most recently visited Into Mischief.

Obligatory is the 41st graded winner and 79th stakes winner for top sire Curlin. She is the third graded winner, second in the Northern Hemisphere, out of a mare by Macho Uno–2015 Eight Belles winner Promise Me Silver (Silver City) was the other.