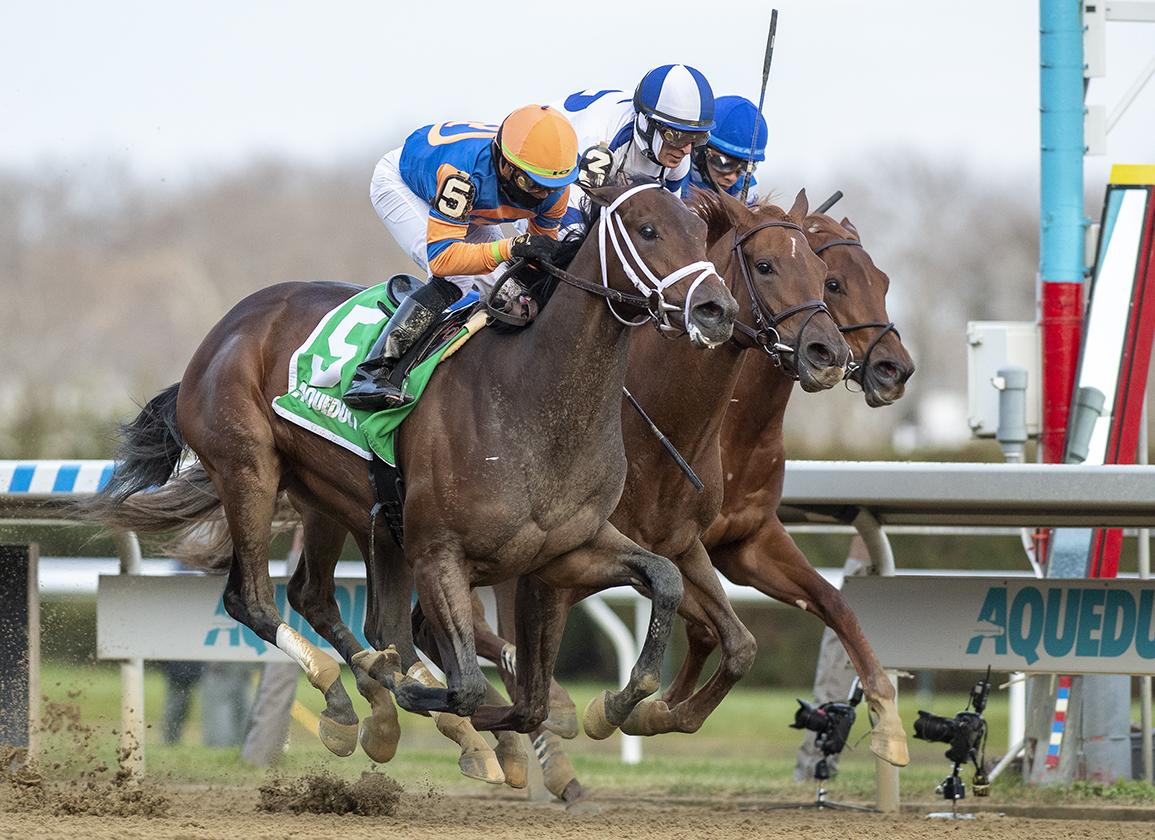 A five-length debut graduate going 8 1/2 panels at Belmont Sept. 25, Nest was a close third in the Nov. 5 Tempted, finishing a neck behind re-opposing Magic Circle (Kantharos). Nest was hung wide in midpack Saturday as Magic Circle raced clear through splits of :25.05 and :50.72. She mounted a four-wide bid approaching the quarter pole, with Venti Valenti glued to her left flank and the pacesetter struggling her leads but still up by daylight. Nest lengthened her stride and had a bit more to give late, reporting home a half-length clear of Venti Valentine in 1:55.07 (compared to 1:53.61 for the Remsen). An objection lodged by Venti Valentine's rider John Velazquez against the winner was disallowed.

“She ran a good race today, we were looking forward to the distance and she got the job done today,” said Ortiz, who rode four winners on the afternoon and survived at least two potential disqualifications after a high-profile DQ on Friday. “I knew [Magic Circle] was inside and came out. I was just surprised that they claimed foul on me, honestly. I grabbed a hold of my filly, corrected her, went to the left hand and went straight. I didn't do anything to the other horse, so I don't know why they claimed foul, but it is what it is.”

“There have been some tight finishes and a little drama to go along with it, but I'm thankful to be on the right side of it all,” said the Hall of Famer. “[Nest] was never able to take over and save much ground, but she got the job done. I'm obviously very happy to be on the winning end.”

As for what could be on the agenda next for Nest, who picked up 10 Kentucky Oaks qualifying points Saturday, Pletcher said, “We'll take her to Palm Beach Downs and map out a game plan with Mike [Repole] and the rest of the owners, but she'll get a freshening after this win.”

Pedigree Notes:
Nest becomes the 87th stakes winner (46th graded) for Hill 'n' Dale super sire Curlin. She is bred on the same cross as the aforementioned Malathaat, along with fellow two-turn GISWs Global Campaign and her full-brother Idol and this year's pricey GSW and 'TDN Rising Star' First Captain. Legendary A.P. Indy is up to 245 stakes winners (115 graded) as a broodmare sire. A.P. Indy's son Bernardini is the damsire of two of Curlin's 16 Grade I winners himself and he was out of a Quiet American mare, as is Nest's dam.

Nest's dam Marion Ravenwood was herself a stakes winner at the Big A and sold for $400,000 at the 2017 Keeneland September sale while in foal to Pioneerof the Nile. Idol, this year's GI Santa Anita H. winner, sold the following September as a yearling for $375,000 at Keeneland. The first foal bred by Ashview and Colts Neck became fellow useful two-turner Dr Jack, and agent Steve Young purchased Marion Ravenwood's current yearling colt by Violence for $275,000 this September. Marion Ravenwood, whose dam was GSW/MGISP, was bred to Curlin and Quality Road for 2022.