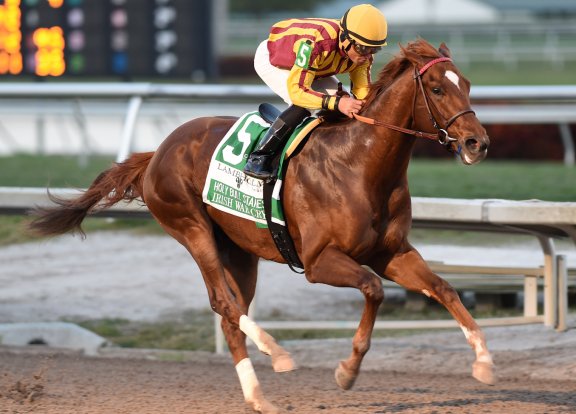 “There's nothing quite like being involved in these 3-year-old races,” winning trainer Graham Motion commented. “It's a great atmosphere here today. It's what we all like to do. It's pretty exciting.”

Given a 4-1 chance, the chestnut set a comfortable pace through fractions of :24.14 and :47.92 and was on cruise control on the far turn as Classic Empire was all in after sitting a stalking trip on the outside in third. The New Jersey-bred turned for home with a clear advantage and, despite racing a bit greenly down the lane, reported home as a much-the-best winner.

“He gets a little hot, but maybe hotter than normal, so I don't know,” trainer Mark Casse said of the returning GI Breeders' Cup Juvenile winner, who was a little reluctant to enter the stalls. “We will regroup. He had no excuse that way [in where he was positioned]; none whatsoever.”

Irish War Cry won his first two starts sprinting at Laurel in 2016, kicking off with an eye-catching come-from-behind debut  win Nov. 11. He added a narrow score after dueling throughout in the seven-panel Marylander S. on New Year's Eve. The chestnut, receiving first-time Lasix while making his two-turn debut in the Holy Bull, completed two works at Palm Meadows for this, most recently posting a five-furlong move in 1:01 (3/28) Jan. 28.

“He's a really nice horse and I was obviously really high on him, but when you're running against the juvenile champion, you have reservations,” Motion added. “I was torn. I was toying with the idea of running in the [GIII] Sam Davis [at Tampa Bay Downs Feb. 11]. I thought it might be a little easier race, because he's so lightly raced. But the more I looked at it, the way he was working, I just thought we had to take a shot today.”

As for what's next, Motion added, “I really haven't gotten beyond today. I don't know if I want to run in every race [at Gulfstream–the GII Fountain of Youth and GI Florida Derby]. It will be hard enough to run back in one of them, obviously, but we'll figure it out.”

Irish War Cry is a homebred for Isabelle Haskell de Tomaso, whose father was Armory Haskell, the president and chairman of Monmouth Park from 1946 to 1966 and the namesake for that track's premier race. Motion has trained a number of other homebreds for de Tomaso over the years, including Irish Strait (English Channel), a half-brother to Irish War Cry who has won four times from thirteen starts, as well as stakes-placed Irish Politics (Political Force).

Irish War Cry was produced by the Isabelle de Tomaso New Jersey-bred homebred Irish Sovereign, a three-time winner. In addition to the stakes-placed Irish Politics (Political Force), the winner's dam is also represented by a yearling filly by Lookin At Lucky and was bred back to Graydar.