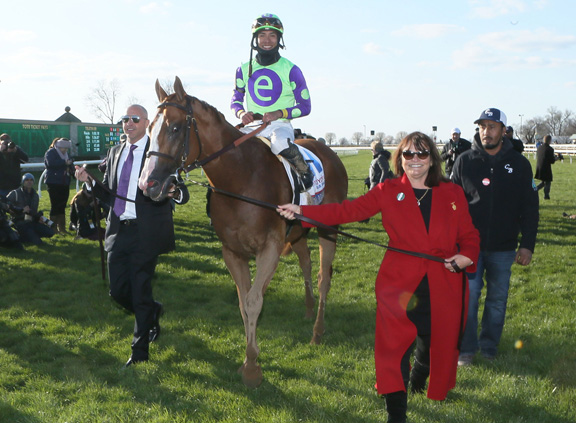 The 'Magic' is back.

Champion Good Magic, a disappointing third at 3-5 in his GII Xpressbet Fountain of Youth S. comebacker Mar. 3, got back on track with a popular win in Keeneland's GII Toyota Blue Grass S. Saturday.

Last year's GI Breeders' Cup Juvenile hero and GI Champagne S. runner-up broke well, and, after taking the clubhouse turn about three- to four-wide, settled in fifth after breaking from post 11 in this full field. He began to advance on the outside entering the far turn and took on Flameaway turning for home. Good Magic kept his momentum rolling into the stretch and was never seriously threatened by the game runner-up, who continued to fight on bravely down the lane after setting a pressured pace.

“In hindsight, [heading into the Fountain of Youth] he was probably a couple of works short,” winning trainer Chad Brown said. “If you want to stay on the Derby trail, you have to run when it's time to get started. This horse came out of that race real well–bigger, stronger and has had some impressive workouts since. We were pretty confident coming into this race. I love the way he did it today.”

Good Magic capped off a stellar 30 minutes for his sire Curlin, who was also represented by GII Wood Memorial S. winner Vino Rosso at Aqueduct. His dam, Stonestreet homebred Glinda the Good, won a pair of stakes and was also third in the 2011 GII Pocahontas S. for Hall of Famer Steve Asmussen. The winner has a juvenile half-brother named Wicked Wizard (Speightstown), a $200,000 KEESEP purchase Paul Roy, and a weanling half-sister by Super Saver. His dam was bred back to Pioneerof the Nile. Good Magic also hails from the family of MGISW Magical Maiden (Lore Avie), GISW Miss Houdini (Belong to Me) and MGSW & GISP sire Papa Clem (Smart Strike), who was bred on the same Smart Strike/Danzig cross as the winner.