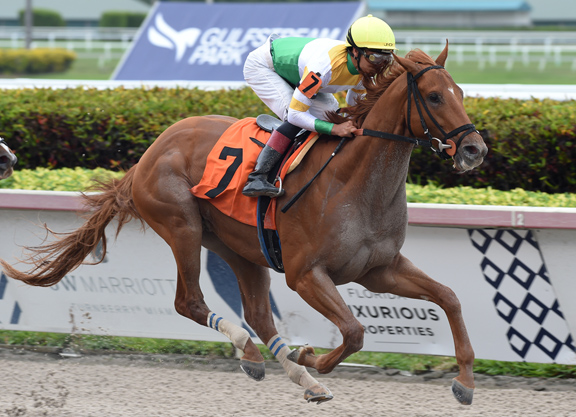 Chiefswood Stable homebred Edge of Fire (Curlin) was crunched into 17-10 favoritism off a morning line nearly three times that and the money proved smart indeed, as the chestnut wheeled off heels passing the midstretch marker and went on to a deceptively easy two-length debut score and 'TDN Rising Star' honors in the process.

Away fairly, but given a busy ride by Jose Ortiz, Edge of Fire–who blew out three furlongs in a bullet :35 1/5 Jan. 28–was rousted along and responded to sit just behind the leading trio while well in hand on the turn. Held together into the final three-sixteenths of a mile, Ortiz switched him out at the furlong grounds and never asked his colt for anything approaching a top effort while edging away to score by daylight. The well-tried Tapi Frost (Tapizar) hit the front inside the eighth pole, but was no match for the winner and settled for second.

The winner is the first foal from his dam, third in the 2015 GIII Selene S. and a daughter of Chiefswood's Essential Edge (Storm Cat), victorious in the grassy GII Canadian S. and third in the Bison City S. during her sophomore season. Edge of Fire's third dam Rose of Tara (Ire) (Generous {Ire}) was a half-sister to champion Salsabil (Ire) and G1SW Marju (Ire) and served as the second dam of MGSW Flameaway (Scat Daddy). Chiefswood's MGSW and Woodbine course-record holder Tiz A Slam (Tiznow) also appears under the third dam. Leading Edge is the dam of the 2-year-old filly Hard Edge (Hard Spun) and a yearling Pioneerof the Nile filly. Leading Edge was most recently covered by Justify.