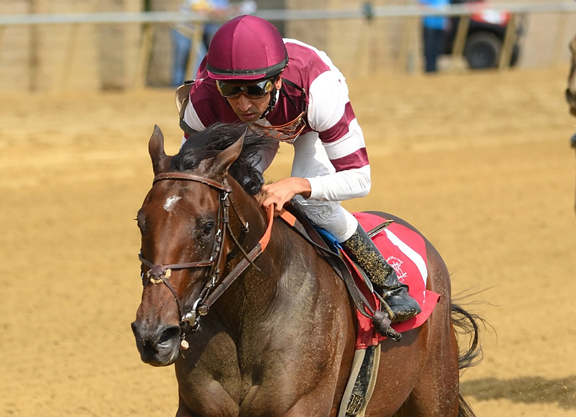 Promising sophomore filly Arrifana (Curlin) saw out an additional furlong at Laurel Saturday to go three-for-three and garner the ‘TDN Rising Star’ distinction. A 10-length debut winner here going seven panels Aug. 1 for breeder Gunpowder Farms, she was subsequently bought into by Millennium Farms, Gainesway Stable and LNJ Foxwoods before overcoming a slow start to take a first-level Saratoga allowance going that same distance Aug. 31. Looking like a very likely winner this time off a last-out 84 Beyer Speed Figure, the bay was pounded down to 10 cents on the dollar and did not disappoint.

Showing a bit more early zip from the rail to chase in second down the backside, Arrifana was given her cue by Julian Pimentel after a :46.21 half to crank up the pressure on the pacesetter. She collared the frontrunner in upper stretch under extremely confident handling, and cruised away from there by a facile 5 1/2 lengths. Hard-knocking older stakes winner Victory Rally (Jump Start) completed the exacta.

The winner is half to Lukes Alley (Flower Alley), Ch. Older Horse-Can, GISW, $795,122, and fillies by Empire Maker born in 2018 and 2019–the yearling sold for $950,000 at the recent Keeneland September sale to Northshore Bloodstock. Dam Vaulcluse (A.P. Indy), a track record breaker going an extended mile on the Tampa dirt in her third win from as many starts, was purchased for $600,000 at the 2016 Fasig-Tipton November sale in foal to Lookin At Lucky. She was bred to War Front this season. This is the extended female family of highest-level winners Coup de Fusil and Elusive City.