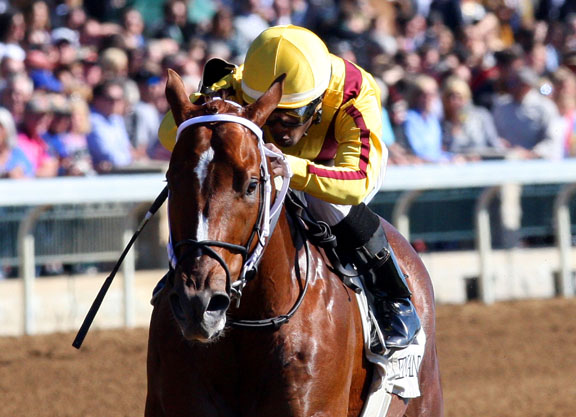 5th-KEE, $56,000, Msw, 10-10, 3yo/up, 6f, 1:09.56, ft.
UNION JACKSON, c, 3, by Curlin
1st Dam: Hot Dixie Chick (GISW, $343,252), by Dixie Union
2nd Dam: Above Perfection, by In Excess (Ire)
3rd Dam: Something Perfect, by Somethingfabulous
Stonestreet Stables' Union Jackson, the first foal out of Barbara Banke's 2009 GI Spinaway S. winner Hot Dixie Chick (Dixie Union), was the piping-hot 1-2 favorite off a big-figure runner-up effort on his Sept. 18 debut at Churchill and made light work of this field to become the latest TDN Rising Star. Beaten 1 1/4 lengths on that occasion by the very well-meant Holding Aces (Eskendereya), Union Jackson jumped best and took some token pressure from the outside. They reached the head of the lane after a half-mile in :45.94, but the homebred kicked it into another gear, covering his final two furlongs in a spectacular :23.62 to report home about nine lengths to the good of Will Did It (Medaglia d'Oro) in a sparkling 1:09.56. Union Jackson is himself a product of a pair of TDN Rising Stars. His sire earned the Rising Star designation with a monster debut victory in February 2007 and retired as a two-time Horse of the Year and North America's all-time leading money spinner with just over $10.5 million in earnings. Hot Dixie Chick achieved her Rising Star with a track-record setting performance in her second career start at Churchill Downs in 2009 before winning the GIII Schuylerville S. and Spinaway in succession. Hot Dixie Chick is the dam of a yearling filly by Smart Strike and a weanling filly by Street Cry (Ire). She was not bred in 2015. Lifetime Record: 2-1-1-0, $41,240. Click for the Equibase.com chart or VIDEO, sponsored by Fasig-Tipton. Click for the free Equineline.com catalogue-style pedigree.
O-Stonestreet Stables LLC; B-Grace Thoroughbred Holdings LLC (KY); T-Steven M Asmussen.