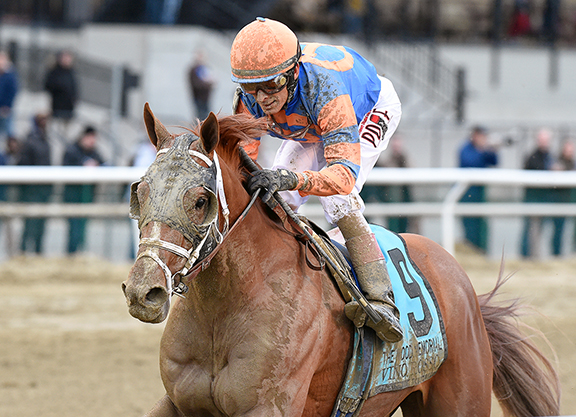 Vino Rosso turned his disappointing fourth-place finish in the GII Lambholm South Tampa Bay Derby into a distant memory while punching his ticket to Louisville here.

In no hurry in sixth as GIII Gotham S. runner-up Old Time Revival (Brethren) sped off through an opening quarter in :22.96, Vino Rosso made steady headway up the backstretch. He revved up with a smart four-wide sweeping move on the far turn, and, after exchanging bumps in the stretch with favored Gotham hero Enticed, straightened out to win going away.

Winning co-owner Mike Repole and trainer Todd Pletcher also won the 2016 Wood, then a Grade I, with Outwork (Uncle Mo).

“We're feeling like we're seeing a horse that has that talent, and he's doing well, and we felt like that mile and an eighth is something he's looking for,” Pletcher said after saddling his fifth winner in this race. “This is the performance we've been looking for.”

Pletcher continued, “There's no question there was some contact [in the stretch]. Johnny [Velazquez's] interpretation was [when] he came over close to him, and the other horse kind of touched him, he touched him back. No question there was contact, I thought it was mutual, but I don't think it affected the outcome of the race. I think Vino Rosso looked like he was going to win at that point, and Enticed held on for second, so in my opinion it did not affect the outcome of the race.”

Vino Rosso becomes the 17th graded winner (10 males/seven females) for Curlin and his 43rd black-type winner overall. The winning Street Cry (Ire) mare Mythical Bride, a half-sister to graded winners Commissioner (A.P. Indy) and Laugh Track (Distorted Humor), brought $42,000 from John Gunther at the 2011 KEENOV sale. She is also represented by a Super Saver colt of 2016 ($160,000 KEESEP yearling) and a Pioneerof the Nile colt of 2017 ($350,000 KEENOV weanling). She was bred back to Uncle Mo.