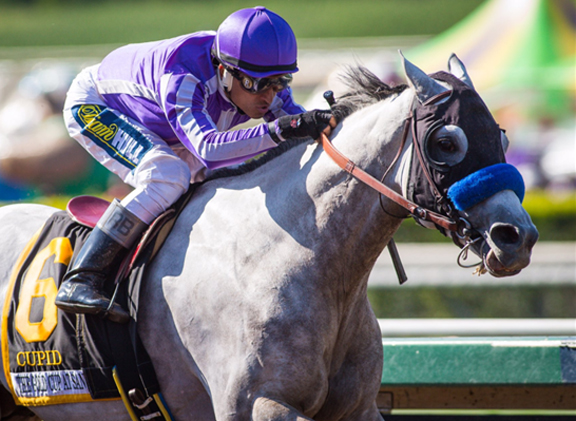 Tabor, Magnier and Smith's Cupid (Tapit) sat a dream trip just behind a trio of dueling leaders and kicked off his 4-year-old season in style with a dominating performance at odds of 7-1 in Saturday's GI Gold Cup at Santa Anita. It was 3 1/4 lengths back to Follow Me Crev (Quality Road) in second. Hard Aces (Hard Spun) completed the trifecta. Cupid's favored stablemate American Freedom (Pulpit) tired to fifth after getting cooked on the front end.

“The Gold Cup has always been a very important race,” Hall of Fame trainer Bob Baffert said after collecting his sixth Gold Cup trophy. “It went really well today. He's going to get better with age. We should have some fun with him this summer.”

The $900,000 KEESEP buy tracked the leading trio from a three-wide fourth through an opening quarter in :23.04. He tucked in a bit and sat on the tail of MGISW Midnight Storm (Pioneerof the Nile), still in fourth, as American Freedom dueled with Prime Attraction through a half in :46.52 and three-quarters in 1:10.62. The chalk gave way entering the far turn leaving Midnight Storm and Cupid to battle it out, but the fight was brief as Cupid took flight in the lane and rolled home to a convincing victory.

“Cupid, off that long layoff–his class showed up and he's been working so well,” Baffert said. “Cupid has changed a lot. He's really filled out. He's always been a beautiful horse.”

Baffert continued, “We took the back roads with Cupid last year and made over a million dollars. Coolmore has been great and they kept him in training. They asked me if I thought he'd get better and I thought he should. We freshened him up and here we are. I got an important Grade I, which is very important for a horse like him.”

Pretty 'n Smart, a runaway debut winner at Turfway and third-place finisher of Hollywood's 2001 Railbird S., was picked up for $525,000 by Omar Trevino, agent, at the 2008 KEENOV sale. In addition to graded winners Ashley's Kitty (Tale of the Cat), Heart Ashley (Lion Heart) and stakes winner Indianapolis (Medaglia d'Oro), the 19-year-old mare, a half-sister to MGSW Hostess (Chester House), is also represented by an unraced 3-year-old filly Sweet Assassin (Tapit) ($500,000 KEESEP – Solis/Litt); a yearling filly by Tapit and had a filly by Triple Crown winner American Pharoah earlier this spring. Photographer (War Front), a daughter of Hostess, debuts in race three at Pimlico Sunday.