Cuomo: Opening Saratoga Will Likely Have to Be Statewide Decision, Coordinated With Northeast Region 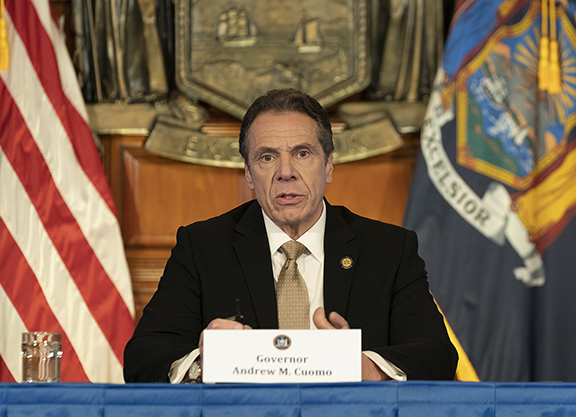 Asked in his daily coronavirus briefing Wednesday about the potential opening of Saratoga Race Course this summer, New York Governor Andrew Cuomo said that he thinks a decision will likely have to be made on a statewide, if not region-wide level. He added that his concern is if Saratoga is opened alone without coordination with other counties and states, it could see even more demand than usual, leading to density issues. He didn't address and wasn't asked about the possibility of Saratoga conducting racing without spectators.

“You can't open an attraction that could bring people from across the state to that attraction and overwhelm a region,” Cuomo said, tying in the Syracuse state fair as another example. “We have time [to make a decision], but today, I don't think you can open those unless we do it statewide, because there is such a pent-up demand to get out of the house and do something, you open Saratoga racetrack, I guarantee you'll have the highest attendance in the history of the Saratoga racetrack.”

In addition to its visitors from downstate, Saratoga regularly attracts patrons from the rest of the tri-state area and New England, which led Cuomo to suggest the decision for reopening the track could be made in conjunction with other states as well.

“You will have people from the entire Northeast region driving to the Saratoga racetrack just because they want to get out of the house,” he said. “You could say, 'Well that's great for the Saratoga racetrack,' but density is not our friend, right? How do you do six feet apart at the racetrack or the state fair when you have double the attendance you've ever had and people are all crammed in there? So I think it would have to be a statewide opening, coordinated with Connecticut and [New] Jersey, otherwise you will have a much, much more dense situation if you wind up being the only attraction 'in town' and 'town' is the tri-state region.”

In a statement issued later in the day, the New York Racing Association's Director of Communications Pat McKenna pointed out that racing with fans in attendance or not racing at all aren't the only two options being considered, and that NYRA is investigating a scenario where they run at Belmont and Saratoga with no spectators, as other tracks across the country have been doing.

“NYRA joins the entire racing community in applauding Governor Cuomo's steady leadership throughout this unprecedented public health crisis,” said McKenna. “We recognize that decisions about large-scale events are rightly left to our elected leaders and public health officials. At the same time, horse racing is in a unique position as a sport that can be safely staged without attendees. Earlier this week, Governor Cuomo encouraged sports entities to consider how they could operate without fans in attendance and be economically viable while providing much-needed entertainment. By closing to spectators and reducing employees and support staff to only those who are required under the rules of racing, the running of races would support the small businesses and hourly workers who form the backbone of the sport. NYRA held races at Aqueduct Racetrack safely and securely under these conditions through Mar. 15. Our experience during this period of time, as well as our ability to continue the training operation at Belmont Park throughout the pandemic, informs the strict safety protocols that we currently have in place at Belmont Park and would seek to implement at Saratoga Race Course.

“As such, NYRA is seeking to resume live racing at Belmont Park in the absence of fans and we have prepared operating plans that follow the same model for Saratoga. These plans prioritize the health and safety of employees, horsemen and the backstretch community and include a broad array of risk-mitigation strategies developed according to the most updated heath guidance. By closing to the public, layering additional health and safety protocols to our ongoing practices, and reducing the number of employees on-property, NYRA is in a position to provide a small sense of normalcy for fans across the country who can watch on television and online. At the same time, this model will enable NYRA to preserve its ability to serve as the cornerstone of an industry that generates more than 19,000 jobs in New York and $3 billion in annual economic impact.

“This is a delicate balance, and one that must always prioritize health and safety. NYRA has experience finding that balance and we are committed to taking every step possible to keep our communities safe while providing entertainment and contributing to the New York economy as we collectively begin the return to a new normal.”