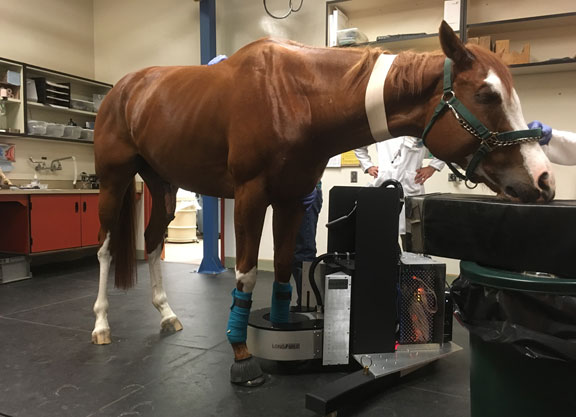 In a news release Wednesday, the California Thoroughbred Trainers (CTT) announced that it had voted at a special board of directors meeting Sunday to “assist in immediate fund-raising” to help the Southern California Equine Foundation (SCEF) purchase a standing magnetic resonance imaging (MRI) unit.

“The urgency of the fund-raising effort is based on a November 15 deadline to contract for the equipment which would then be installed at Santa Anita prior to the start of the upcoming Winter/Spring Thoroughbred race meeting commencing on December 26,” the press release states. The Dolly Green Research Foundation (DGRF) has already pledged $450,000 towards the unit-the fund-raising effort aims to garner a matching sum. The Dolly Green Research Foundation is affiliated with the Southern California Equine Foundation and was established to administer a bequest from the late Dolly Green, a longtime racehorse owner with a special interest in equine welfare.

“Raising a matching amount would not only secure the standing MRI for use with horses at Santa Anita and training elsewhere in Southern California, but also reduce the ongoing per-scan charges for veterinarians, owners, and trainers, once the facility is installed,” the Wednesday press release stated.

In further news, the arrival of the Positron Emission Tomography (PET) scan unit to Santa Anita for a trial period–one anticipated to coincide with the Breeders' Cup–has been postponed.

According to Karen Klawitter, CEO of the SCEF, the new MILE-PET Scan machine is still undergoing preliminary trials at UC Davis, where it was developed. Nevertheless, the unit is still expected to be shipped to Santa Anita before the next winter-spring meet gets underway, Klawitter added.

An MRI is a diagnostic technology that studies have shown detects certain lower limb issues earlier than other common imaging modalities. Why is this important?

Pre-existing injuries which aren't always clinically apparent are present in more than 85% of catastrophic breakdowns, studies have shown, with the most common site of catastrophic injury proving to be the fetlock, and the proximal sesamoid bones within the fetlock especially vulnerable. Injuries to the proximal sesamoid bones accounting for 50-60% of all musculoskeletal fractures, researchers have found.

According to Wednesday's news release, the addition of the standing MRI and the new PET scan unit to Santa Anita “would complete the state-of-the-art Santa Anita Imaging Center,” which already includes nuclear scintigraphy technology. “TSG will also provide all installation infrastructure required for the addition of the standing MRI. The Imaging Center is a companion facility to the renowned Equine Hospital at Santa Anita Park, founded 40 years ago as the first-ever at a race track,” the news release states.

The new PET scan unit is still a largely untested modality in racehorses, but it is widely expected to bring a heightened level of sensitivity to diagnostic imaging of the bone. The new scanner resembles a basketball hoop hovering just above the ground, with a ring of detectors that can open freely. This means that horses won't require general anesthesia to be scanned.

The way it works is similar to a regular bone scan-the injection of a radioactive tracer that will light up under imaging any abnormal areas in the bone. The main difference being, PET scan technology results in a three-dimensional picture as opposed to two-dimensional.

According to Klawitter, members of the SCEF's board, along with Mathieu Spriet, associate professor of Surgical and Radiological Sciences at UC Davis and the mastermind behind the new PET technology, decided the machine's hyper-sensitivity meant it was inadvisable to ship it to Santa Anita from Northern California for only a short period of time.

As first envisaged, the unit was to be trialed on a number of horses at Santa Anita for a period of time overlapping the Breeders' Cup before it was returned to UC Davis for further review. But Klawitter explained that the ongoing trials at UC Davis are nevertheless going to plan.

“Dr. Spriet, he's very excited about it,” said Klawitter. “There have been no glitches that I've heard of that would delay it coming here in December.”

Donations for the MRI unit of any amount to SCEF, organized under Section 501 (c) (3) of the Internal Revenue Code, are tax-deductible to the full extent permitted by law.