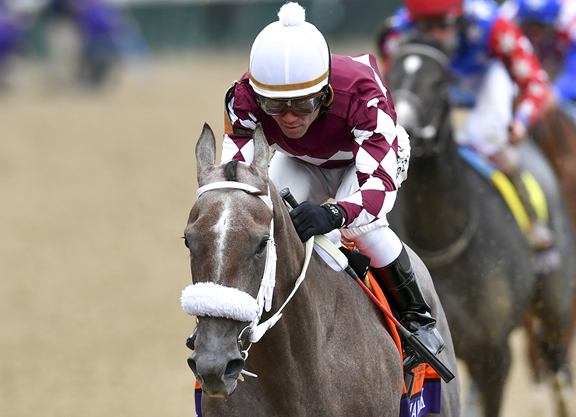 The two biggest prior victories of Midlantic-based trainer John Servis's career had come at Churchill Downs, and now it's the three biggest after Cash Is King and D J Stable's Jaywalk (Cross Traffic) went right to the front and never looked back en route to a dominant 5 1/2-length tally in the GI Tito's Handmade Vodka Breeders' Cup Juvenile Fillies.

Emerging from the early scramble into the first turn to take a clear lead, the grey tugged her way under a tight hold through splits of :23.23 and :46.76. Favorite Bellafina (Quality Road) appeared all in heading for home as Restless Rider (Distorted Humor) revved up wider with Serengeti Empress (Alternation) beginning to fade and longshot Vibrance (Violence) enjoying a nice drafting trip. Jaywalk dug in with her head cocked a bit to the stands, and she found another gear in midstretch to shoot away after Joel Rosario threw a cross. Restless Rider edged Vibrance for third.

“It was a perfect trip,” said Rosario, who would later boot Game Winner (Candy Ride {Arg}) to victory in the GI Sentient Jet Breeders' Cup Juvenile. “She broke and she wanted the lead. She just improved her position. She really relaxed. She broke really sharp and wanted one thing–she wanted to go, so I dropped my hands and let her be happy and let her do it the rest of the way.”

Of beaten favorite Bellafina, who rode a three-race win streak into this that included a pair of Grade I races out west, trainer Simon Callaghan said, “She broke a little flat footed and the rider had to use her a little bit early. After that, she had a pretty good trip, but it just did not seem to happen today. It is hard to know [about the surface]. It is the first time she has run over this sort of track.”

Jaywalk was second to 'TDN Rising Star'-earning and subsequently graded stakes-placed Nonna Madeline (Candy Ride {Arg}) in a Monmouth maiden special weight June 23. She broke through emphatically in the Parx mud July 24, and took a key running of the White Clay Creek S. at Delaware Aug. 22. Jaywalk aired in the GI Frizette S. at Belmont in similarly dominant fashion Oct. 7, but was trying two turns for the first time here.

“I was looking for a big effort from her, but I didn't expect for her to go to the lead again,” said Servis, who also took the 2004 GI Kentucky Derby with Smarty Jones (Elusive Quality) and 2016 GI Kentucky Oaks with Cathryn Sophia (Street Boss) here. “I really thought there was enough speed in here that she'd probably be sitting off it a bit. But, Joel said when she left the gate, he knew right then she had running on her mind. And, he just took it from there. Once she got the front, she started flicking her ears and looked nice and relaxed.”

This was the first Breeders' Cup win for Servis.

“Even though we're from New Jersey, we've had two of our biggest wins here in Kentucky,” noted Jonathan Green, son of Len and Lois. “We won the [GI] Ashland [at Keeneland] back in 1991 with a great filly named Do ItWith Style, and now we're back here with another great filly. So we just feel very fortunate to have won the biggest races of our career here in Kentucky.”

Of the partnership with Zacney, Green said, “Chuck's phenomenal. He's been the best partner we've ever had in the 30 years we've been in the business. I think that Dad even said the only other partner he's had for a longer time was my mom, so it really keeps him in very high regard.”

Jaywalk was the first stakes winner when she won the White Clay Creek and first Grade I winner when she won the Frizette for first-crop sire Cross Traffic (Unbridled's Song). A $190,000 Keeneland September buy–the priciest filly and second-most expensive yearling overall by her sire to sell last season–Jaywalk is a half-sister to three-time stakes winner and graded stakes-placed Danzatrice (Dunkirk); a yearling filly by Karakontie (Jpn) and a weanling filly by Empire Maker. Her dam was bred back to Empire Maker this year, while her second dam Spin Room (Spinning World) is a half-sister to sire and MGSW/MGISP Mission Impazible (Unbridled's Song) and GSWs Forest Camp (Deputy Minister) and Spanish Empire (Pleasant Colony). Orientate was also the broodmare sire of 2012 GI Breeders' Cup Juvenile winner Shanghai Bobby (Harlan's Holiday).