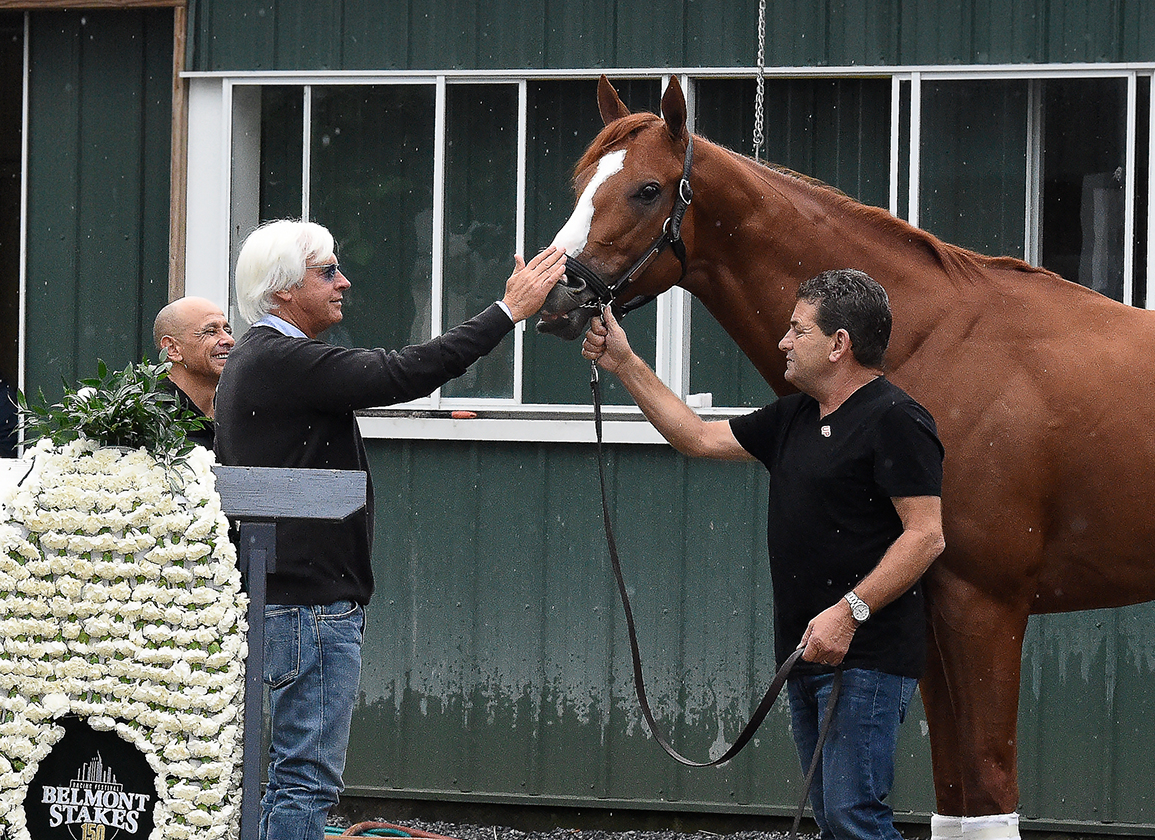 Under pressure of cross-examination that questioned his credibility, a retired New York State Gaming Commission (NYSGC) steward launched into a nearly five-minute tirade just before the close of Wednesday's hearing to determine whether the New York Racing Association (NYRA) can exclude trainer Bob Baffert over alleged “detrimental conduct.”

Voice cracking with emotion and punctuating points by banging his fist on the witness table, Stephen Lewandowski, who served as the state steward at NYRA tracks between 2014 and 2019, lost his cool after testifying in support of Baffert and then facing terse questioning from a NYRA lawyer who wanted to establish that Lewandowski was being selectively forgetful about his previous dealings with a Baffert controversy.

NYRA's lead attorney also wanted to get it on the record that the former steward had once been put on notice by a state ethics board for allegedly improper post-retirement advocacy on behalf of the controversial banned trainer Richard “Rick” E. Dutrow, Jr., back in 2019.

Lewandowski's outburst, after some 7 1/2 hours of lower-key testimony from seven witnesses, overshadowed remote video appearances by Hall-of-Fame jockeys Mike Smith and John Velazquez, both of whom expressed unwavering support of Baffert.

The eruption also trumped an attempt by Baffert's defense team to get the hearing called off over procedural provisions related to whether NYRA was exceeding its authority as an administrative agency (the hearing proceeded; Baffert's lawyers were bluntly told by hearing officer O. Peter Sherwood to file a post-case brief that he would take under consideration).

For the third straight day, Baffert did not take the witness stand during the Jan. 26 hearing, which despite being conducted in a conference room within the Manhattan offices of NYRA's attorneys, had all the elements of a court trial.

In the morning, Baffert could be seen via the Zoom feed wearing a blue sport coat, blue dress shirt and jeans, tapping his feet in a fidgety way while sipping from a white coffee mug. But by the end of the day any signs of nervous energy had dissipated when Baffert was shown at the respondent's table alongside his attorneys right before adjournment of another long day of testimony.

NYRA is charging that Baffert's alleged conduct is or has been “detrimental” to three entities: 1) The best interests of racing; 2) The health and safety of horses and jockeys; 3) NYRA's business operations.

NYRA had tried to rule off Baffert back on May 17, 2021, without any sort of due process. But he filed a federal lawsuit that got that ban overturned, and now must go through a newly invented NYRA exclusionary hearing process, at which Medina Spirit's still-not-adjudicated GI Kentucky Derby drug positive and four other recent equine drug infractions are the focal points.

Lewandowski, called as a witness by Clark Brewster, one of Baffert's attorneys, testified that he had never met the Hall of Fame trainer in person until Tuesday. The former steward said he had reached out to Baffert by phone “when this whole [NYRA banishment] process started up, and I offered my support… because I feel he's being unfairly taken advantage of.”

During his time as a steward at NYRA tracks (which included fill-in stints as far back as 2000), Lewandowski said that Baffert “never, never, never, never had any problems in New York. Never. The only thing I could ever possibly remember is that maybe his owners needed a license,” which he described as a minor difficulty he helped to correct.

But when NYRA attorney Hank Greenberg took over for cross-examination, he tried to jog Lewandowski's memory by asking him no fewer than five different ways if he was sure that Baffert had never been involved with a controversial issue that the stewards had to deal with.

“Not in connection with Bob Baffert, no,” Lewandowski affirmed.

Greenberg then asked him to specifically recall the 2018 GI Belmont S. That race, of course, was memorable for the Baffert-trained Justify winning the Triple Crown.

But it was also notable for assertions that Restoring Hope, an uncoupled stablemate of Justify, was sent for speed while taken very wide into the first turn before abruptly cutting down to secure a position to the outside of Justify's flank. It appeared to some observers that Restoring Hope was acting as a “wing man” or “blocker” to escort the on-the-lead Justify to victory.

In addition, rival owner Mike Repole subsequently implored the stewards to investigate possible jockeys' collusion based on the rider of his own horse, Noble Indy, not following instructions to vie for the lead. Repole had also said at the time that Restoring Hope was ridden more like “an offensive lineman than a racehorse trying to win the Belmont.”

Brewster could see where this was going, and protested “This is nonsense!” several times before the hearing officer allowed the race replay to be shown.

Yet Lewandowski continued to maintain that he didn't recall any controversy, couldn't remember any owners complaining, couldn't recollect discussing the situation with the two other stewards, didn't remember later interviewing an involved jockey, and drew a blank about ever speaking to the press about the controversy involving Baffert's horse.

Greenberg then presented him with news clippings about the non-investigation, and asked the now-flustered Lewandowski to read his own quotes about it to refresh his memory.

Yet Greenberg did not dwell on that one point. He quickly pivoted to bring up Lewandowski's support of Dutrow, who in 2011 was suspended 10 years and fined $50,000 by the NYSGC's predecessor agency after one of his Aqueduct winners tested positive for an opioid analgesic and syringes containing a painkiller and a sedative were found in Dutrow's stable office.

Lewandowski had retired in June 2019. Five months later, he wrote a letter to the NYSGC and the Queens District Attorney stating that Dutrow's penalties were too tough and alleging that, “Mr. Braulio Baeza Jr., the NYRA Steward at the time… told me on numerous occasions that evidence against Mr. Dutrow was planted…”

That letter found its way into published news reports. Baeza denied he ever said such a thing. The NYSGC issued a press release to denounce Lewandowski's assertions.

And, according Greenberg, the New York State Joint Commission on Public Ethics (JCOPE) sent Lewandowski a letter putting him on notice that former state employees were not supposed to appear before their former agencies to advocate on behalf of anyone or anything for a two-year period after they left their jobs.

Lewandowski replied to Greenberg by stating that he had “no knowledge” of any JCOPE investigation into that. “No one informed me–sort of what NYRA did with Bob [Baffert]–that this was going on,” he said. “So I got a letter saying…they chose not to punish me or pursue this any further. They found no reason to do it.”

Greenberg had that letter too. He brought it out and began quoting form it to ask Lewandowski if he recalled that it stated his advocating for clemency on behalf of Dutrow “implicates post-employment restrictions that apply to former state employees, specifically the two-year ban.”

And that's when the former state steward let loose with a rambling, under-oath diatribe reminiscent of Humphrey Bogart's courtroom portrayal of the under-duress Captain Queeg in the 1954 film “The Caine Mutiny.”

“I got no punishment. I didn't even know it was going on. How about that? How could they run [an investigation] without even speaking to me? How can they do that? Well, I know. NYRA does the same thing. They just decide to suspend Bob Baffert and not even speak to him. You think that's right? You're an attorney. Do you?” Lewandowski challenged Greenberg.

“Do you think if I conduct an investigation about you and not [ask you] what the circumstances are that that's right? That's what you're doing with Bob Baffert. You're suspending him without even speaking to him…. How about asking him about charges in Kentucky that haven't even been filed yet? If I was him, I wouldn't answer the question!” Lewandowski snarled.

The outburst continued (repetitive parts have been omitted here):

“[Baffert is] testifying in two hearings now. How could you do that to somebody? A person that was so kind to show his [Triple Crown] horses to everybody. Everybody! Including all of NYRA's executives. All of them went down there. Bob pulled [American Pharoah and Justify] out and took pictures with them and did all that. And I never went down there. Why? Because I felt it was improper for me to do that. It wasn't right…

“And another thing with Rick Dutrow. I never spoke to him until I retired. I called up [a NYSGC executive] and I said, 'How does Rick Dutrow go about reapplying? How does he do it?'…. And so it took six months to get an answer from the gaming commission. Who's responsible? Their job is to protect and to help people like [Dutrow], not hurt him. It's their job, that's what they're supposed to do, make it for the people!”

The conference room remained silent while Lewandowski kept going on about the NYSGC's alleged wrongdoing of Dutrow.

“Nowhere and no-how has [there] ever been [such strict penalization]–10 years and $50,000! And you know another thing? They took his $50,000…. They took his $50,000 and then told him–the was a man who was totally destroyed, had no money, nothing, completely broke–and they made him pay $50,000 and then told him forget about [being reinstated]. You know what that's like? I had the opportunity to do that, but I would never do that to a licensee. I would never take your money when I know you can't work…”

At which point, Greenberg calmly asked, “Are you done?”

“One of us had information to help a former [trainer] who was wiped out, sir. Wiped out! They wiped him out! They took 200 horses away from him and he was out of business the next day. They didn't even give him the right to come on the track and pay his help! He was out of business. Done. Finished…. Wiped a person out! That's what you're about? That's what you're representing?…Are you accusing me of lying? I'm asking you a question!”

The hearing officer informed Lewandowski that's “the way it works around here…The lawyer gets to ask the questions.”

After Greenberg yielded his cross-examination, Brewster came back up to address a final point related to Baffert being allegedly unfairly targeted by NYRA. It was a quietly emphatic one that might have been worth having his witness's credibility picked apart.

“All these things [Greenberg] said that were so bad about this trainer, Rick Dutrow. Did NYRA seek to suspend Rick Dutrow?” Brewster asked.

“In your career, did you ever see NYRA take after a trainer such as [with Baffert], that never had a violation in New York?” Brewster asked.

“No,” Lewandowski replied, having regained his composure.