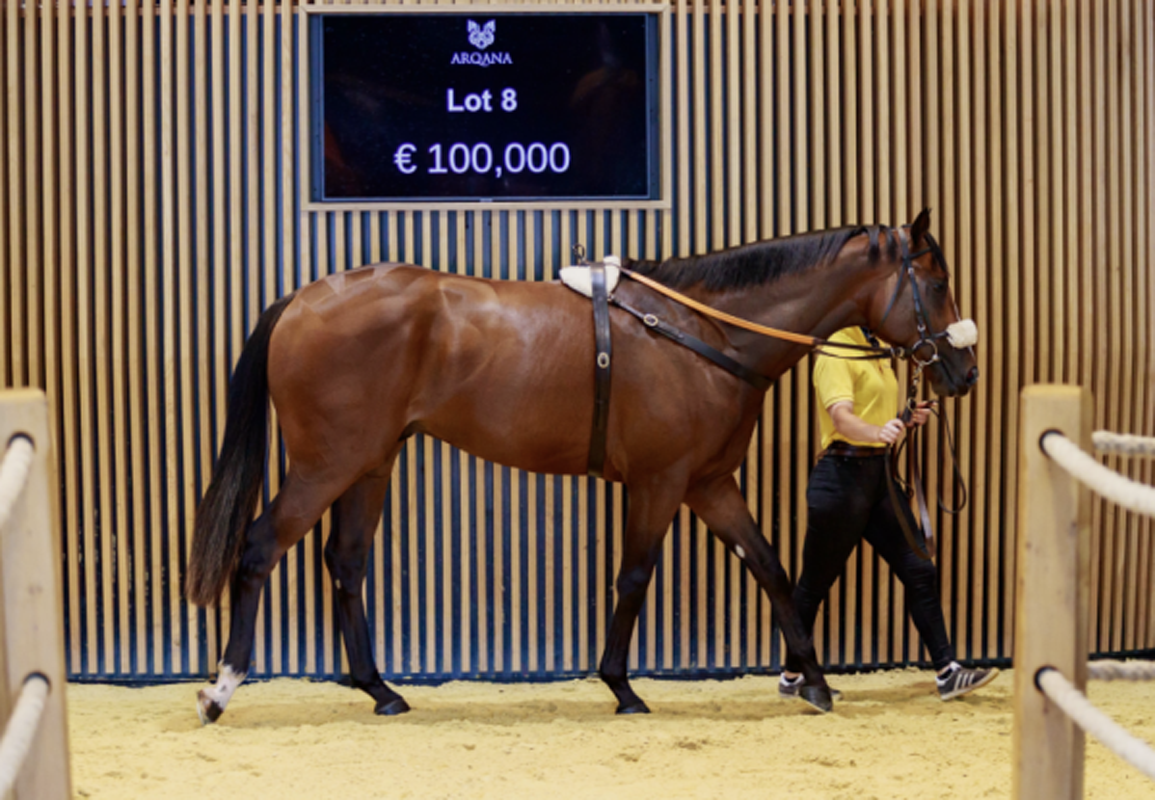 A 2-year-old colt by American-based sire Creative Cause is bound for the stable of trainer Simone Brogi after Nicolas de Watrigant of Mandore International Agency went to €100,000 to secure the colt on behalf of Middleham Park Racing and partners during the opening session of the Arqana Summer Sale on Wednesday. Lot 8, out of the winning Proud Citizen mare Fight With Pride, represented a good pinhook for Willie Browne of Mocklershill, having cost $12,000 at Keeneland September last year. The colt was bred by Brereton Jones and his son Bret Jones, who own Airdrie Stud in Kentucky and stand the sire and also stood the damsire. He was the top-priced lot of the early breeze-up portion of the session, where 70 youngsters were offered, with 48 sold (68.6%) for an aggregate of €721,500. The average for the 2-year-olds was €15,031, and the median €8,500.

“He's a lovely looking colt, the horse of the sale if you ask me,” said de Watrigant. “He was meant to go to the breeze-up in May, but after a setback he came here. I've bought him for an association between Middleham Park Racing, Tim Palin, a client of Simone Brogi's, Thomas Bernereau and Pierre Pilarski, whose colours he will run in. He'll be trained by Simone Brogi.”

Also among the leading juveniles offered on Wednesday was Knockanglass Stable's Night Of Thunder (Ire) colt out of Clowning (Distorted Humor) (lot 81i), who was bought by Jean-Pierre Deroubaix of F.B.A for €70,000, having been bought back for €48,800 from Arqana's breeze-up sale at Doncaster and having originally been a 75,000gns yearling. He was bought for Jurgen Sartori, who is making a return to racing having also bought Group 3 winner No Limit Credit (Ger), also by Night Of Thunder, for €480,000 at Arqana December last year. Lot 81i will go into training in Germany. Like the top-priced breezer, he comes from an American family; he is out of an unraced daughter of dual Grade I winner Flashing (A.P. Indy), who has produced the French listed winner and group placed Floodlight (Medaglia d'Oro).

Edging the Creative Cause colt for top lot of the sale was a gelded son of Zarak (Fr), a first-season sire who was a Group 1 winner on the flat but those headline-making son on Wednesday was catalogued as a 2-year-old store. That is because he is the first foal out of the listed-placed jumper Boreal Du Berlais, and from a quality family in that realm. Lot 214 was bought by Paul Basquin from Haras du Saubouas for €110,000. Two additional 2-year-old stores reached the six-figure mark: lot 234, a son of Authorized (Ire), and lot 192, a son of No Risk At All (Fr), each fetched €100,000.