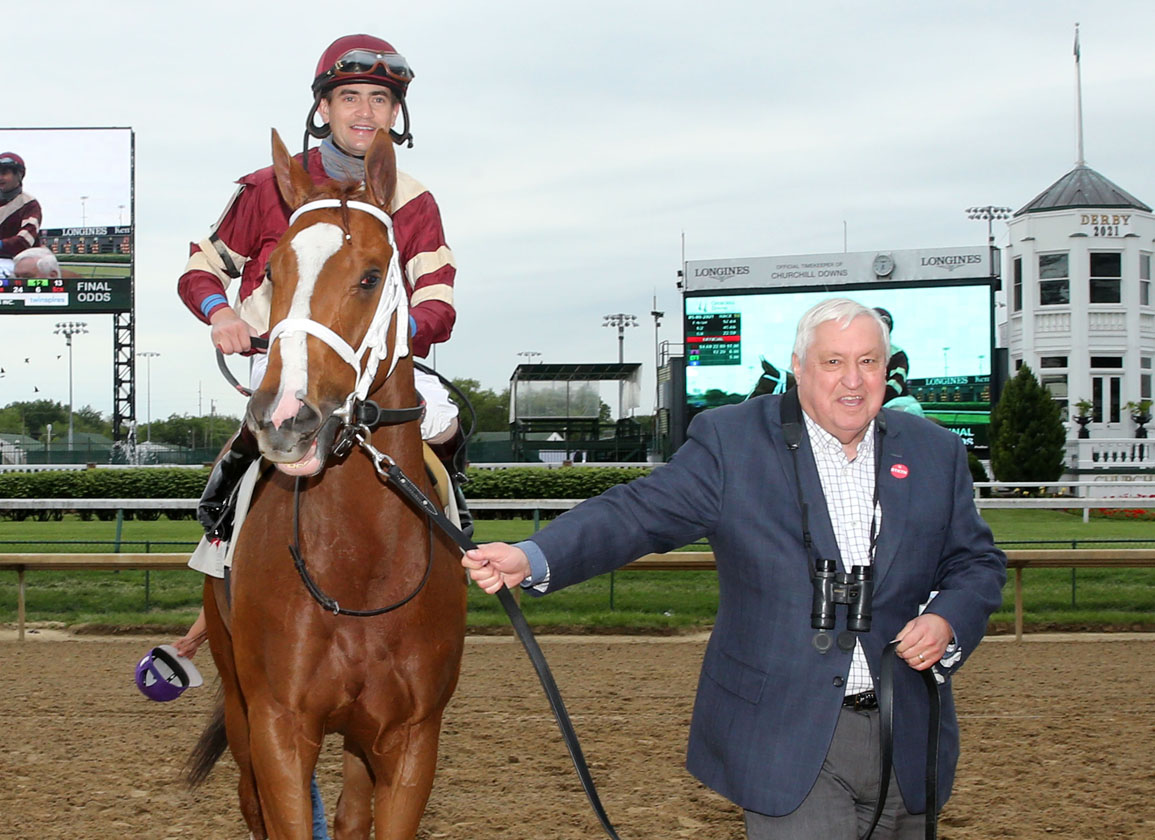 Richardson heads into the winner's circle at Churchill Downs | Coady

David Richardson, M.D., a distinguished Kentucky-based surgeon who owned and bred Thoroughbreds for nearly half a century and was known as a thoughtful, cerebral racing regulator whose zeal for the sport shone through in his volunteer service on numerous industry-related boards, died Sept. 7 in Saratoga Springs, New York, after developing pneumonia related to COVID-19.

Richardson had been briefly hospitalized in the intensive care unit at Saratoga Hospital; he was believed to be 76 years old.

“David was a remarkable man who touched so many lives in his capacity as a brilliant surgeon, mine included, and seamlessly blended his Eastern Kentucky sensibilities with his dual professions and passions of horse racing and medicine,” Morris wrote. “There are countless people on the backside and frontside who literally owe their lives to David thanks to his keen observations of some health issue which led to first-class treatment, despite [a patient's] ability to pay.”

Tommy Drury, who trained horses for Richardson, wrote on Facebook that, “My heart is truly broken, as I'll never get the chance to thank you for all you've done to make my life better. RIP Dr Richardson. My life just won't be the same without you.”

James David Richardson (he was generally known by either just his middle name or “J. David” to friends) was the first child born into a working-class family in Morehead, Kentucky. According to a biography published earlier this year in The American Surgeon, Richardson was an outstanding student who rose to be valedictorian of his high school class, winning a state essay contest on ethics and citizenship while also teaming to win the Kentucky debating club championship.

Richardson graduated from Morehead State University in just three years with a near-perfect grade point average, then was awarded a scholarship to the University of Kentucky (UK) medical school.

Upon graduating from UK in 1970, he was recruited as an intern and resident to the Department of Surgery at UK, then transferred to the University of Texas at San Antonio where he completed both general surgery and thoracic surgery residencies. Richardson subsequently became one of the nation's few quadruple board-certified surgeons (general, thoracic, vascular and critical care surgeries).

Soon after, Richardson was recruited to the faculty of the University of Louisville, where for decades he served as a professor and later as vice chair of surgery. In 2014, he was elected president-elect of the American College of Surgeons.

“I did big surgery,” Richardson told TDN in a 2019 profile. “The first liver transplants in Kentucky, for example. I ran a trauma program for years. Major surgery is extraordinarily high stakes, high risk, high reward–and a lot of pressure. But while I've never had to do horses for business, I'm very sympathetic with people who do. If you've paid a big stud fee, or bought a high-priced mare, and are counting on that to make your nut for the year, I would think that's a very intense thing. Great when it works, terrible when it doesn't. It's not like life and death. But it's certainly a lot of pressure.”

In response to Richardson's passing, the University of Louisville Hospital released a statement Tuesday which read, “U of L Health extends its sympathy to his family and is grieving with them. He was an outstanding mentor and skilled surgeon who saved the lives of thousands through his work and education of many future doctors. Dr. Richardson was a beloved member of our family and will be missed.”

Horses had fascinated Richardson since boyhood, when he would leave friends at the Coney Island amusement park in Cincinnati to bluff his way, underage, into the adjacent River Downs racetrack. He bought his first Thoroughbred in 1975, at age 30, and had his first stakes winner in 1978.

“I enjoy all aspects of it,” he told TDN. “I like to bet. I like to breed horses. I love to race horses. Even in claiming races, I still get a kick out of winning.”

While carving out a career as a young medic, Richardson was taken under the wing of Hall-of-Fame trainer Woody Stephens, who was a family member and, like Richardson, had also risen from modest means in rural Kentucky to achieve wider success in his chosen field (Richardson called Stephens “Uncle” even though the trainer was Richardson's father's cousin). Through Stephens, Richardson availed himself of opportunities to learn everything he could about selecting, raising and training racehorses.

By the early 1980s, Richardson had learned enough to get involved in picking out some of the better-known horses campaigned by owner Henryk de Kwiatkowski that Stephens would go on to train. Among them were Danzig, Conquistador Cielo, and Sabin.

According to his American Surgeon bio, around the mid-1980s, Richardson began to devote more time to owning his own horses, especially broodmares. “Either by himself or in partnership with others, he has raised and sold over 1,000 horses that have ultimately won races at different tracks,” the bio stated. As of earlier this year, Richardson owned about 40 horses in various stages of development.

“I've spent tens of thousands of hours working things out,” Richardson told TDN in 2019. “I've looked at thousands of yearlings. I've looked at broodmares, November and January, snow knee-deep or bitter, freezing my butt off. So to me, that's part of paying your dues, and trying to become better versed, and staying up with the game. Because if you really do that carefully, you see how sometimes horses that win races aren't the prettiest things, or the best conformed.”

When it came to acquiring his own horses, Richardson relished that challenge of coming up with overlooked contenders that outran their auction purchase prices. In 1991, he bought eventual MGSW Northern Emerald in partnership for $55,000; she won the 1995 GI Flower Bowl H. Richardson also co-owned the homebred MGSP Mrs. Revere in the 1980s; that filly now has a stakes race named in her honor at Churchill Downs.

Richardson was a member of The Jockey Club, and twice served as president of the KTA/KTOB. He served as chairman of Thoroughbred Owners and Breeders of America and also as chair of its American Graded Stakes Committee. He also served on the Breeders' Cup Board of Directors.

“It's a tough business, but it's a great sport,” Richardson told TDN in 2019. “Horses are such wonderful creatures. I take a lot of people out to the track–we do it every year with the surgical residents–and the joy people have when they experience racing, even as novices, is amazing to see. So I hope we never lose that.”

According to Morris, Richardson is survived by his wife, Maxine, and three children.