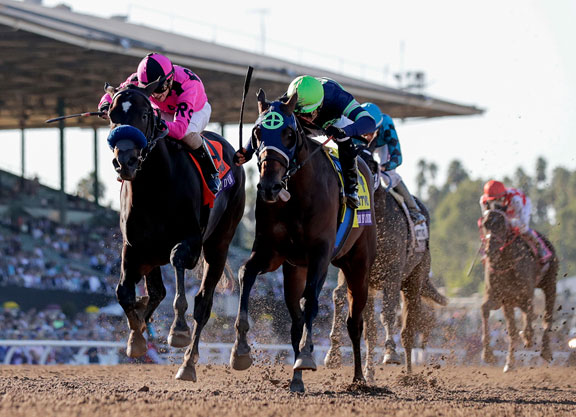 In a Classic season blighted by the coronavirus pandemic, Oaklawn rounds out its winter meet with not one but two renewals of the GI Arkansas Derby. Facing a tough group of contenders in Saturday's second division of the Classic prep, including undefeated Nadal (Blame), winner of the GII San Vicente S. and GII Rebel S., and GII Lambholm South Tampa Bay Derby hero King Guillermo (Uncle Mo), defending juvenile champion Storm the Court (Court Vision) will try to recover some of the sparkle from his 2-year-old season. This year, he finished fourth-beaten 2 1/4 lengths by Nadal–in the San Vincente before coming home third behind undefeated Authentic (Into Mischief) in the Mar. 7 GII San Felipe S.

“He had a little bit of freshening [following the Breeders' Cup] and I don't think we had him that keyed up for the San Vincente,” said trainer Peter Eurton. “He ran OK, probably a little on the dull side, but I thought he bounced back decently in the San Felipe. He didn't have the best of trips, but the quality of horses always tends to change a little bit from the 2-year-olds to the 3-year-olds. But he has a reason to get better because he is a May foal and we're happy with the way he's going right now.”

Asked about the bay's form leading into his two latest starts, Eurton explained, “Going into the San Vicente, I thought his weight was good. But, heading into the San Felipe, he dropped a few pounds-he was about the same weight or even a little lighter than he was as a juvenile. Now, he's about 1,100 pounds and that's about 35 pounds back on [since the San Felipe]. He hasn't missed a day of training, so he seems like he's in a good place right now. Hopefully, we can see him jump up to where we want him to be.”

A first out winner at Del Mar last August, Storm the Court failed to finish after losing his rider in the GI Del Mar Futurity in early September before finishing a well-beaten third in the GI American Pharoah S. later that month. Overlooked at 45-1 for his seasonal finale in the Nov. 1 GI Breeders' Cup Juvenile at Santa Anita, the bay got his head down ahead of Anneau d'Oro (Medaglia d'Oro) on the wire, securing the championship in the process.

“As far as Storm the Court is concerned, we may have stayed [in California] for the [GI] Santa Anita Derby,” he admitted when asked to outline his original plan for the colt. “The horse is coming up to his third race off of the layoff, so we though the timing for him was right to take the trip [to Oaklawn].”

Storm the Court was scheduled to arrive in Arkansas from Eurton's Santa Anita base Tuesday afternoon.

And with the GI Kentucky Derby now rescheduled for Sept. 5, Eurton said the extra time, while not ideal for everyone, may prove to be a positive for the May foal.

“He may get a little bit taller, and he'll probably fill out a little bit more and be better able to handle the travel,” he said. “He's a lighter-framed horse, built like a wide receiver, tall and lean. I think [the Derby being held in September] is going to help him a lot.”

In addition to Storm the Court, Eurton had been expecting to be represented Saturday by stablemate Shooters Shoot (Competitive Edge) in the first division of the Arkansas Derby, however, the winner of a one-mile Oaklawn optional claimer Apr. 11 was removed from consideration Tuesday morning.

“He did come up with a fever [Tuesday] morning,” Eurton confirmed. “He didn't finish up his feed and his temperature was high, he probably has a virus. He's fine but, unfortunately, he'll be scratched. It's very disappointing.”

Prior to his Oaklawn victory, Shooters Shoot broke his maiden going a mile at Santa Anita Mar. 15.

Typically one to watch on the big days, trainer Brad Cox is represented by Clint and Lance Glassaway, Madaket Stables and Wonder Stables' Wells Bayou (Lookin At Lucky) in the second division of the Arkansas Derby Saturday.

“I think his division looks like the Arkansas Derby and the other division looks like an allowance race,” opined bloodstock agent Liz Crow, responsible for unearthing several top horses for her partners, including champions Monomoy Girl (Tapizar) and British Idiom (Flashback). “I think Wells Bayou's division is way tougher. It's great for racing fans. It's a really good race, from top to bottom, and it will be a fun race to watch.”

In terms of the bay's progress leading into the nine-furlong test, she added, “He's doing extremely well and really couldn't be doing any better right now.”

The winner of a muddy one-mile optional claimer at Oaklawn in January, the colt finished a length second behind winner Silver Prospector (Declaration of War) in the GIII Southwest S. Feb. 17 before bouncing back to wire the field in the 9 1/2-furlong GII Louisiana Derby at the Fair Grounds Mar. 21. In his two most recent works, he went five furlongs in 1:00 4/5 at Oaklawn Apr. 19 before adding a four-furlong move in :48 2/5 over the Hot Springs oval Apr. 26.

While well represented on Oaklawn's closing day Saturday, Crow admitted that not all of her client's horses, including the 2018 champion sophomore filly and five-time Grade I winner Monomoy Girl, have been as lucky in finding an ideal spot to start during the pandemic.

“It's hard when you have horses ready to run and you don't have a game-plan of where to run them,” she said. “We have Monomoy Girl ready to run off a year-and-a-half layoff and nowhere to run her, not knowing when Churchill is going to open.”

She added, “She couldn't be doing any better. She fired three bullets at Keeneland and is ready to go. Hopefully, we will have a condition book at Churchill soon to figure out where she'll run because we'd like to have her return [at Churchill] in Kentucky. Hopefully, we'll all get to see her soon.”