Count Again Up in Time in Kilroe Mile 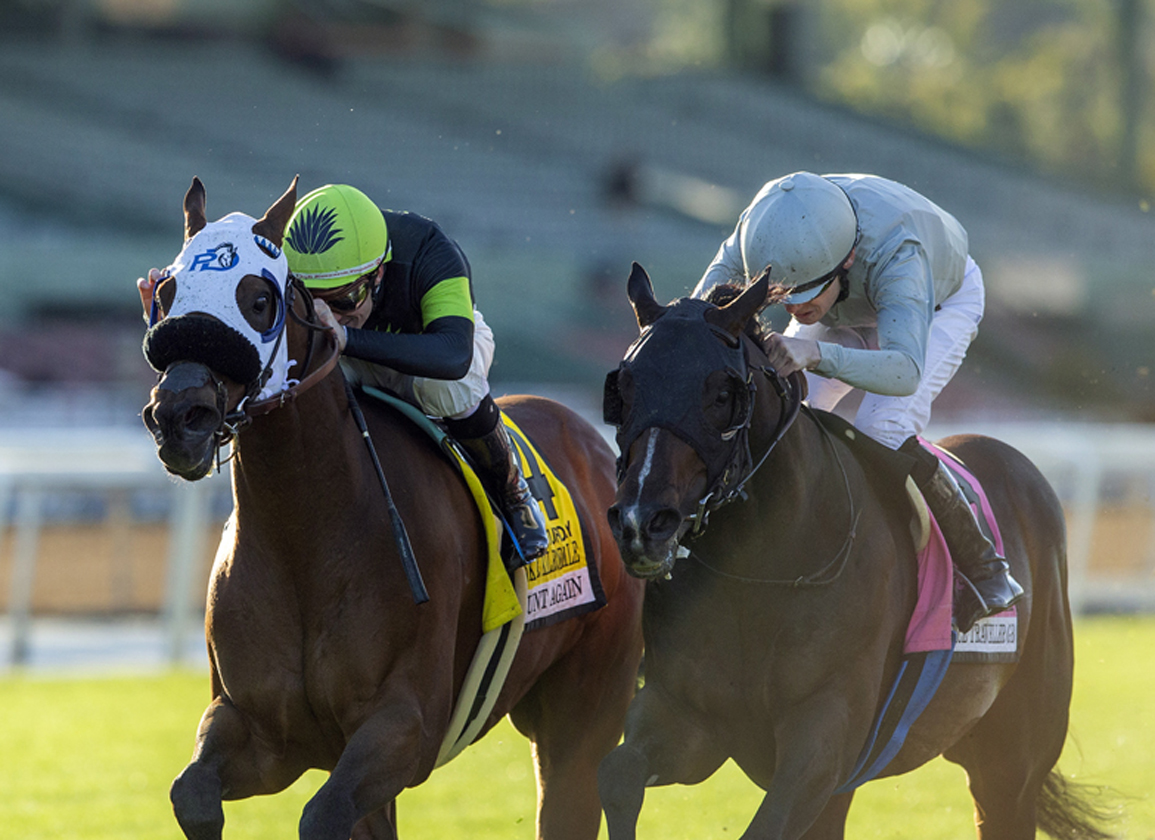 Making just his 15th start at the age of seven, Agave Racing Stable and Sam-Son Farm's Count Again (Awesome Again) uncorked his usual late run to come out on top of a tight finish in Santa Anita's GI Frank E. Kilroe Mile S. A close third in last year's Kilroe and most recently a winner of the GIII Thunder Road S. here Feb. 5, the Ontario-bred gelding sat in a joint second last around the first turn while scraping paint. He continued to draft from a nice spot as GISW Beyond Brilliant (Twirling Candy) sped along up front through a :45.45 half and six furlongs in 1:09.38. Count Again was switched out by Flavien Prat for clear sailing as they entered the stretch, and he soon joined the trio fighting it out for the top slot, hitting his best stride when it mattered to poke a head in front in the shadow of the wire. Space Traveller (GB) (Bated Breath {GB}) and Subconscious (Tapit) were second and third, respectively, while Beyond Brilliant wasn't beaten far despite his early exertions.

“It took him a little bit to get going, but once he did, he did well,” said winning rider Flavien Prat. “I had a good trip and it worked out well. He got himself into the race and the pace was pretty hot. I was traveling super well and I thought I was behind a good horse. I was able to track him all the way. Once I got to the outside, I was able to run him down.”

Count Again spent time in three prior barns while owned solely by his breeder Sam-Son Farm, taking the 2020 GIII Singspiel S. and finishing fourth in the GI Northern Dancer S. over longer trips for Gail Cox. Agave Racing Stable subsequently bought in, and Count Again shipped West to join the Phil D'Amato barn and immediately reward his new connections with a last-to-first score in Del Mar's GII Sea Biscuit H. He went winless in his next five outings, including in the Kilroe and when fourth amidst a tough bunch in Churchill's GI Old Forester Bourbon Turf Classic S. on Derby Day, but broke through again last out after a freshening since August.

“He's just one of those dream kind of horses,” D'Amato said. “You know if you have dead aim at the top of the lane with him, he's going to give you his late kick pretty much every time. He's just a fresh happy horse now and Flavien fits him well.”

The conditioner added, “This is probably one of my favorite races growing up and I've had pretty decent luck winning this race [before in 2018], but this horse being a 7-year-old, he was just one of those horses knocking on the door for the Grade I and to get it done today…for him and [Agave's] Mark Martinez and Sam-Son Farms it means a lot.”

Pedigree Notes:
Count Again's half-brother Ransom the Moon was purchased privately from Sam-Son by these same connections before going on to take back-to-back renewals of the GI Bing Crosby S. in 2017 and 2018. The Calumet Farm resident has first 2-year-olds this season.