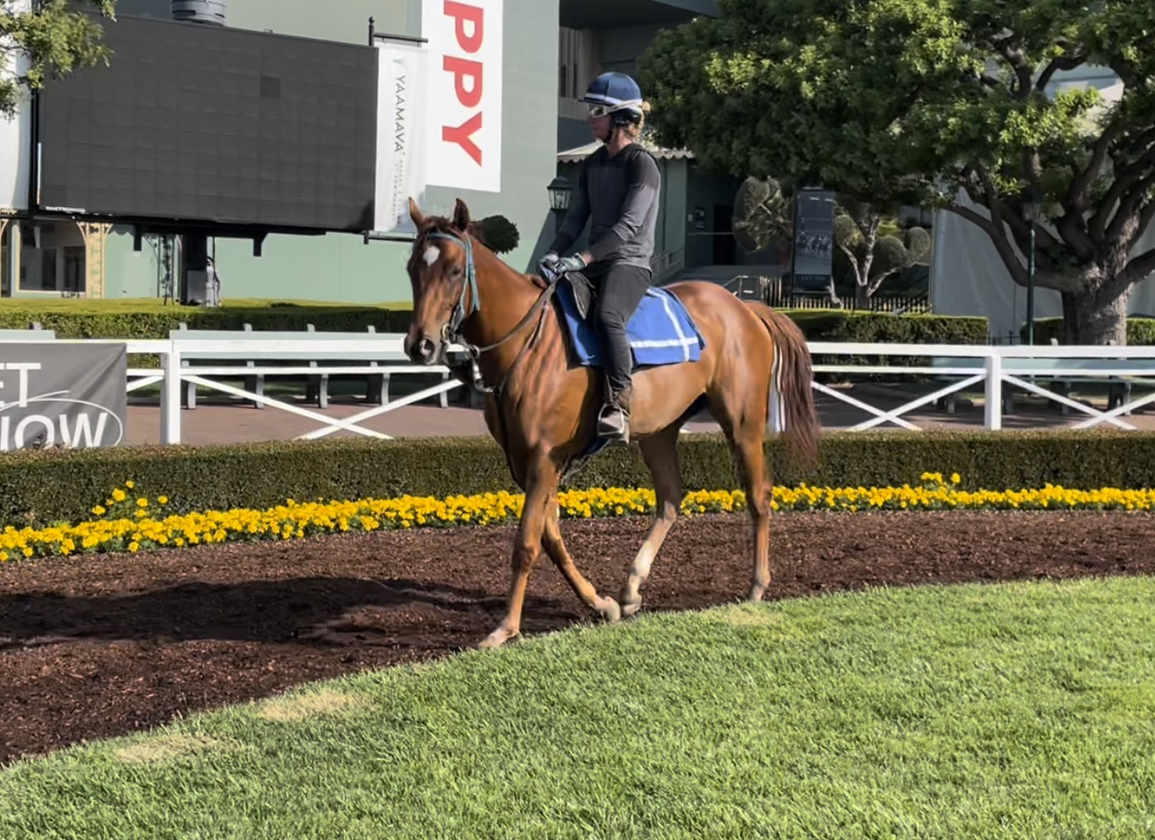 The youngest progeny from Hall of Fame superstar Zenyatta recently arrived at John Shirreffs's barn at Santa Anita. The 2-year-old chestnut filly by Candy Ride (Arg) named Zilkha is already well on her way to making her debut this year.

Zilkha's big personality became abundantly clear during my interview with Shirreffs. The juvenile was front and center, peering over Shirreffs's shoulder as she was hamming for the camera, and at one point put her nose right in it. Perhaps she is more like Zenyatta than we know?

When I posed that question to Shirreffs, he hedged and went on to describe Queen Z's early days. Back then, the only person to get on her was Heather Gonzales because she was bucking everyone else off.

“Heather didn't care,” he said with a chuckle. “Zenyatta would buck her off too and run back to the barn. Then she would do it all again the next day.”

As for this youngest daughter of Zenyatta, Shirreffs is enthusiastic in his praise for the regally bred filly. When I pressed him about the latest Z baby to show up at his barn, his face lit up.

“She's fabulous,” quipped the usually reserved trainer. “She really gets over the track well and she's almost the perfect size. She's got a big stride on her and a great attitude.”

Zilkha began her early training just as her famous mother did at Mayberry Farm in Ocala. Shirreffs is quick to credit the operation as Zilkha has taken her relocation to California in stride.

“She came here in great shape and is acting like she's been here for weeks, but it's been six days!”

Shirreffs is not the only one who has thought that Zilkha could be the best of Zenyatta's foals.

Back in 2020 when the filly was just a few months old, Lane's End Farm's broodmare manager Jenn Laidlaw said in a TDN interview, “She's been a superstar since day one….She's probably my favorite of Zenyatta's foals.”

Shirreffs described them one by one while Zilkha eagerly searched for the carrot tucked neatly in his back pocket.

“Cozmic One (Bernardini) was a big, strong horse,” he recalled. “He probably would have done great when they had four-mile heat racing.” 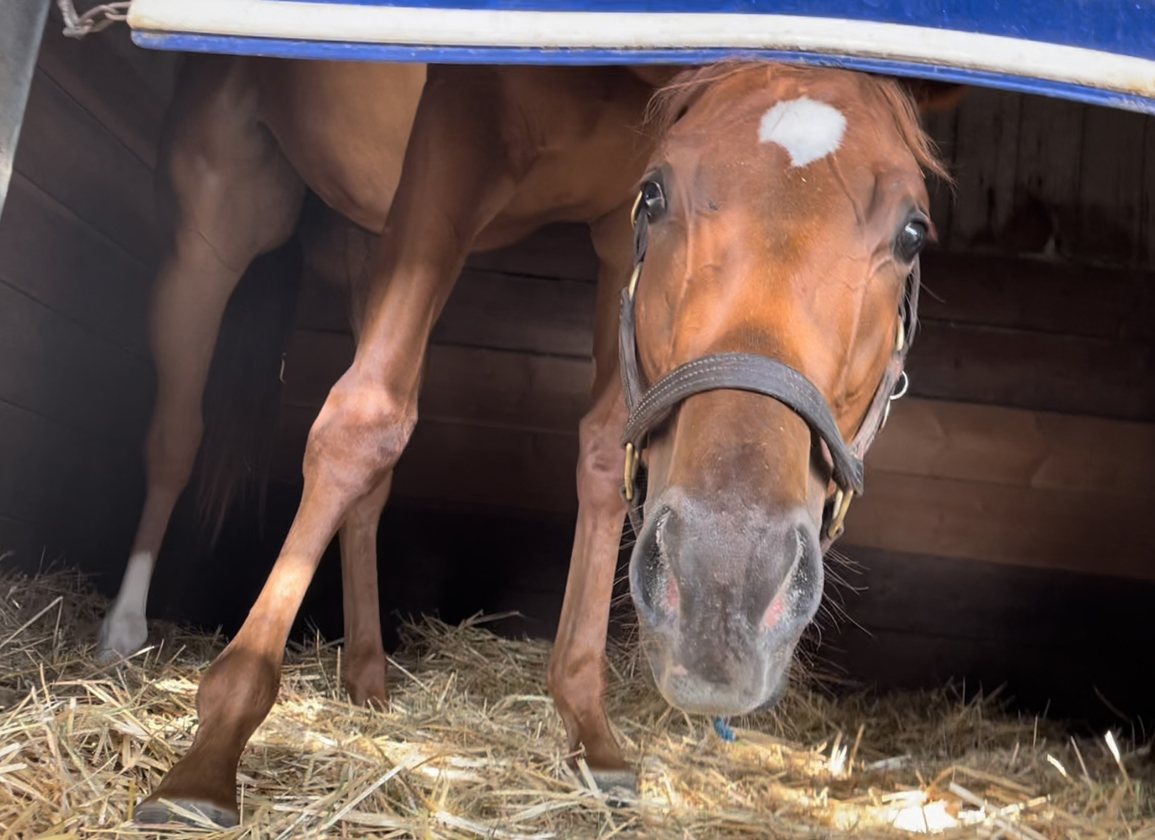 Cozmic One was unplaced in five starts, but is now thriving as he competes in jumper classes with Sergio and Isabela de Sousa in Lexington, Kentucky. Watch our TDN interview with Isabela here.

Shirreffs described Zenyatta's next foal, Ziconic (Tapit), as one of the toughest horses the septuagenarian conditioner has ever trained.

“I can remember leading him onto the track one day and suddenly I heard a noise behind me only to turn around and see Ziconic coming towards the pony on his hind legs as fast as he could.”

Now gelded, Ziconic is enjoying a second career as a hunter jumper with Sarah Pollock in California.

Zenyatta's third foal to reach the Shirreffs barn, Zellda (Medaglia d'Oro), never made it to the races and recently retired to Lane's End. Sheriffs described her as a pretty filly, but said she didn't have the size or scope to be a racehorse.

Zenyatta's fourth foal to get to Shirreffs, Zilkha, was named after the late Cecile Zilkha, who owner and breeder Ann Holbrook-Moss described as “a beautiful and strong lifelong philanthropist.” Cecile had a significant impact in her involvement with a number of charities, including the Hospital for Special Surgery and the Metropolitan Opera, where she served as a member of the board of trustees and its vice chairman.

I followed the philanthropist's equine namesake one morning, expecting her to train at 9:30 a.m., which is when most tracks are flooded with rowdy, unraced 2-year-olds at this time of year. But Shirreffs, who literally could author his own book on training, sends her out every morning at 8 a.m., coincidentally with two other juveniles she trained with at Mayberry Farm.

“It's busy out there and it's good for them,” Shirreffs told me.

Zilkha duly galloped a mile and a quarter with regular rider Amy Vasco in the stirrups, coming home through the paddock and not even blinking as she strutted past the life-sized bronze statue of her famous mother in the paddock gardens.

I posed the question to Shirreffs: What would it mean to Zenyatta's legacy if she was ever able to replicate herself?

Shirreffs was quick to point out that he didn't think it would mean anything, as Zenyatta and her legacy stand alone. However, he later added, “It would be really great to have Zenyatta produce a winner–a nice horse, one we can all enjoy, watch run and think about the days of Zenyatta running.”

I got a stiff 'No!' when I asked Shirreffs if he ever goes back and watches some of Zenyatta's races.

“I have such great memories that I really don't need to go back and watch them,” he said.

Here's hoping we get some good ones from Zilkha!