Cosato Hoping Sales Are a Slam Dunk, Too 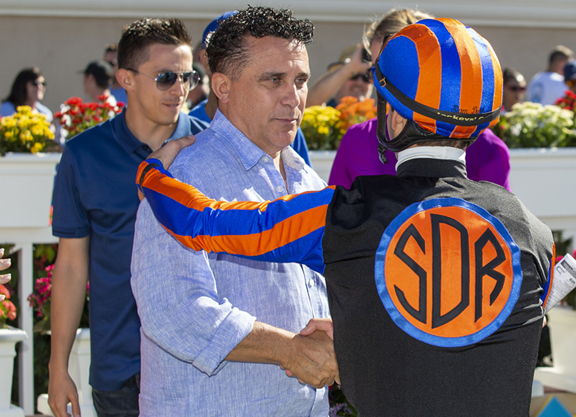 Nick Cosato, who has made a habit of hitting the winner's circle with graded stakes victors from his Slam Dunk Racing partnership, will aim for big-time success in the sales ring when he offers a colt from the first crop of champion Arrogate during the second session of the Keeneland September Yearling Sale Sept. 14. Consigned by War Horse Place, the gray yearling (hip 280) is a half-brother to Grade I winner Whitmore (Pleasantly Perfect).

The hard-trying speedster Whitmore has become a fan favorite with six graded stakes wins over the last four years and he continues to have success into his 7-year-old season, most recently finishing second in the GI Alfred G. Vanderbilt H. But it was the venerable gelding's very first start back in November of 2015 that first attracted Cosato's attention.

“When Whitmore ran in his debut race, I loved the way he ran,” Cosato said. “I reached out to [trainer] Ron Moquett and tried to buy him. This was early on in Slam Dunk's existence. It kind of sounded like they were going to sell, but then they got an internal partner to buy in, so he wasn't for sale. I thought the next best thing would be his dam.”

Whitmore's dam Melody's Spirit (Scat Daddy) had failed to sell at that year's Keeneland January Sale when offered by his breeder, John Liviakis.

“I reached out to John Liviakis, who at the time was racing in California,” Cosato said. “I asked John if he would be interested in selling the mare and he initially said no. But two weeks later, he called me back and he said, 'You know what, I am interested in selling her.' So I bought her.”

Cosato's first foal out of the unraced mare was Kid Sis (Atriedes), who sold for $135,000 at the 2017 Fasig-Tipton July Yearling Sale and eventually joined Moquett's barn after selling for $130,000 at the OBS June sale the following year.

The mare's colt by Liam's Map sold to Alex and JoAnn Lieblong for $190,000 at last year's Keeneland September sale. Now named Skip Intro, the bay colt is training with Moquett at Churchill Downs and most recently worked five furlongs in 1:01.20 (12/19) Aug. 23.

“The Liam's Map, from what I've been told, has had three or four and they are pretty high on that one,” Cosato said.

Of the decision to send Melody's Spirit to Arrogate, Cosato said, “He was a phenomenal racehorse. I would say, in my lifetime, Secretariat's GI Belmont S. win, Arazi's win in the Breeders' Cup, and you'd have to put Arrogate's win in the G1 Dubai World Cup right up with those two. There was a lot of buzz and I thought it would be great to go to a stallion like that. Here we are a couple of years later and hopefully he represents us well at the sale.”

Now 11, Melody's Spirit is in foal to Constitution.

“She throws an absolutely beautiful foal and she has been an absolute treat to have. We are looking forward to the Constitution–knock on wood that it comes out safe and healthy,” Cosato said.

While Slam Dunk is a racing partnership, the breeding operation is all Cosato's.

“Melody's Spirit is my best broodmare,” Cosato said. “I play at a lower level on a lot of the others, based on pedigree. I try to race most of them, but the higher-end ones, I can't afford not to sell them. We have 80 horses, total, broodmares, weanlings, yearlings and horses in training. We probably have 35 to 40 in training. When you race a lot, you have to generate some revenue, so some of them, even though I would love to keep them and race them, they just get too expensive to keep and race.”

Melody's Spirit was acquired from Liviakis, but she's not the only one and Cosato credits the California breeder with the creation of his own broodmare band.

“We started talking pedigrees,” Cosato recalled of his introduction to the breeding side of the industry. “John is a big out-cross guy and he taught me a decent amount about the whole out-cross breeding. Before I knew it, I had a lot of his mares. John is a pretty excitable guy when things are going good. When things go south, he lets go of a lot of things. So if you catch him at the right time, you can get a pretty decent deal. He is a fair man. Things were going really well for me and I grabbed a few of his broodmares.”

He continued, “It's a crap shoot, it's an expensive part of the game. The game is expensive generally, but the breeding-like they say, if you want to make a billionaire a millionaire, tell them to get a farm.”

Cosato will be hoping to make the breeding industry work for him when he sends his lone yearling offering of the year through the ring at Keeneland.

“Hopefully there are many more to follow, but this will be our first Book 1 offering,” he said. “Obviously, if this colt doesn't bring what I think he should, then I would consider racing him. But I think he's going to. He's a really good-looking individual.”