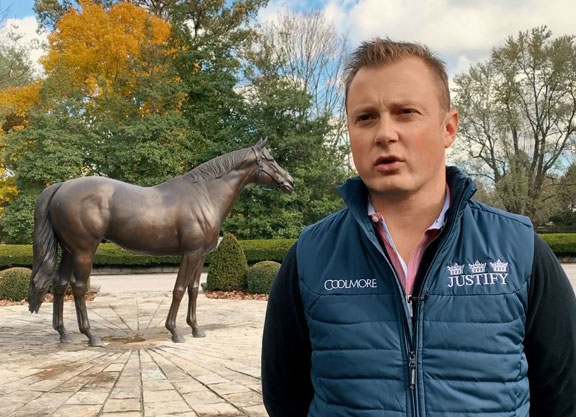 One day after Coolmore released its star-studded Ashford Stud stallion roster and fees for the 2022 breeding season, Coolmore's nomination sales head Adrian Wallace joined the TDN Writers' Room presented by Keeneland Wednesday morning. Calling in via Zoom as the Green Group Guest of the Week, Wallace talked about his upbringing in the Irish racing and breeding world, the surging Munnings and Caravaggio and early returns on Triple Crown winner Justify.

Asked about Munnings, whose stud fee has jumped all the way from $40,000 to $85,000 in recent years, Wallace said, “He's a very interesting horse because if you study how his stallion career has evolved, he's really, really done it the hard way. He was a high-priced juvenile at $1.7 million, a three-time Grade II winner, Grade I placed, he obviously had the speed and the precocity, but he retired without winning the all-important Grade I. We introduced him at a fee of $12,500 and while he was always popular, he was covering workmanlike, middle of the range mares. The thing that he seems to transmit that helped him through that sort of lull in his early books is [he produces] very durable horses. It's amazing how many four, five, six, seven, 8-year-olds he has that are still running. I think when you've got horses in your stable, as a trainer, as an owner, that are constantly earning a check at whatever level you're at, it leaves a good taste in your mouth. It's very important in keeping him relevant and popular in owners, buyers and breeders' minds. And now he's at a stage where he's receiving very good support from some of the best breeders in the world. The best is yet to come with him and I think is a horse we'll eventually stand for $100,000 having done it the hard way.”

New to Ashford this year was Caravaggio, who has gotten off to a rip-roaring start in Europe and currently boasts 21 winners. Wallace discussed the decision to bring the gray son of Scat Daddy, originally bred in America, back to the States.

“He was a horse that we wanted to have back here pretty much from the moment we heard he was going to retire,” he said. “So we begged to have him and luckily, we got him in his fourth year. I think when you look at him, he's very much an American type of horse. He's very well built. He's very broad across his chest. He's got a great forearm, a great gaskin on him. He looks fast. He looked like he should have been a dirt horse rather than a turf sprinter. Certainly he's off to a flying start in Europe and he bred 170 mares here in his first book of mares. He was very popular. American breeders like him physically, so I think he's a horse with a lot to offer.”

Elsewhere on the show, which is also sponsored by Coolmore, West Point Thoroughbreds, the New York Thoroughbred Breeding and Development Fund and Legacy Bloodstock, the writers picked the winner of their “Name the Colt” contest sponsored by Lane's End and Honor Code, broke down the implications of the Breeders' Cup decision on Bob Baffert, reacted to some troubling news out of Delaware Park and more. Click here to watch the podcast; click here for the audio-only version or find it on Apple Podcasts or Spotify.