Controversial Win at Belmont by Shipper from China 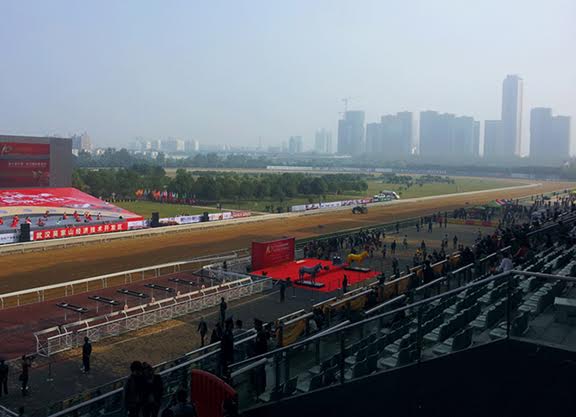 When bettors perused the past performances of Mongolian Prince (NZ) (St Reims {NZ}) in Sunday’s sixth race at Belmont Park, a maiden event, they saw a horse who had raced once, finishing fifth in a Mar. 18 maiden race at Gulfstream. There was no way of knowing there was much more to his story.

At odds of 16-1, Mongolian Prince won the race by a head for trainer Todd Pletcher and rider John Velazquez, an outcome that might not have seemed so surprising had the wagering public been privy to the fact that not only was Mongolian Prince not a maiden, but he was a stakes winner in China.

No one involved, from Pletcher to the owners, the Inner Mongolia Rider Horse Industry, to the New York Racing Association, apparently broke any rules. However, New York Gaming Commission spokesman Lee Park told the TDN Tuesday that the organization is “actively reviewing the matter.”

The real problem is that the system clearly failed the betting public.

Getting details on horses competing in China’s nascent horse racing industry is not easy. But in the case of Mongolian Prince the owners were so excited about the horse’s arrival that they contacted several news outlets, including the Thoroughbred Daily News, in January to announce that Mongolian Prince was coming to the U.S. The TDN’s story included information that Mongolian Prince had won three of five starts in China including a 21-length win at Wuhan racetrack in October. According to Victoria Wang, the assistant to Inner Mongolia Horse Racing Industry CEO Lang Ling, the purse of the race at Wuhan was worth roughly $50,000.

Because he was born in the Southern Hemisphere, Mongolian Prince is considered a 4-year-old here, but was classified as a 3-year-old in China.

“He was the best 3-year-old in China,” Wang said. “In China, he would not be considered a 3-year-old until Aug. 1, so he was racing as a 3-year-old. He improved to the point where he was unbeatable. The talent level is not high in China, so we wanted to send him to America to see how he could do.”

So why was Mongolian Prince classified as a maiden and why didn’t his past performances include any of his races in China? The answer involves competing racing associations in China, one the U.S. Jockey Club and other racing organizations around the globe recognize and one that they don’t.

When asked to clarify Mongolian Prince’s status, the Jockey Club responded by email with the following statement: “The China Stud Book Committee submitted a letter during the importing process that Mongolian Prince (NZ) did not race in China Horse Industry Association (CHIA)-recognized races and therefore the committee did not have race records for that horse. The China Stud Book Committee is the established sole authority to register Thoroughbreds in China, and is established within the CHIA.”

Mongolian Prince competed at racetracks under the jurisdiction of the Chinese Equestrian Association. There doesn’t appear to be anything minor league about the Chinese Equestrian Association tracks. The Hong Kong Jockey Club announced last September that it had reached a strategic agreement with the CEA to assist the organization. The agreement included working together on the final leg of the China Horse Racing Gran Prix at Jinma Racecourse.

According to the website, chinaculture.org, the Chinese Equestrian Association was founded in 1979 and is a formal member of International Equestrian Foundation. While it oversees many equestrian sports, it clearly focuses on horses racing as the website says the CEA’s mission includes: “formulate rules on the management of racehorses; to define the categories of racehorses and set up evaluation standards on the horses.”

It is not clear why races at the CEA tracks are not recognized internationally.

There is no gambling on racing in China. Purses come from sponsorships, from entry fees and other sources.

The Inner Mongolia Rider Horse Industry is not the first Chinese ownership group to send horses to the U.S. The China Horse Club has campaigned several horses here and has won five races in the U.S. The best of those horses has been Parranda (English Channel) who won the 2015 GIII Marshua’s River at Gulfstream. Parranda, like many of the China Horse Club horses, either began their careers outside of China or never raced there.

It is believed that Mongolian Prince is the second horse that has raced in China to win in the U.S. In October, the China Horse Club’s Beat of the Drum (Duke of Marmalade {Ire}) won an allowance race at Santa Anita. The mare began her career in Europe for trainer Aidan O’Brien before being purchased by the Chinese group. The horse raced twice in China and won a race there in 2013. The Equibase past performances include lines from the two Chinese races, one of which had a purse of $163,000.

According to its website, the Inner Mongolia Horse Racing Industry is China’s “leading private horse industry firm.” Wang said that Ling is actively buying horses, particularly in Australia and New Zealand, and is also purchasing standardbreds and Arabians. She said Ling owns about 1,000 horses and that plans are to continue to send the better ones to race in the U.S.

With racing growing in China and with both Ling and the China Horse Club looking to build stables here, it appears that U.S. racing authorities need to take a hard look at how they can get accurate information on races held in China into the hands of bettors and clarify whether a horse that had won a stakes race by 21 lengths should be eligible to race against maidens.