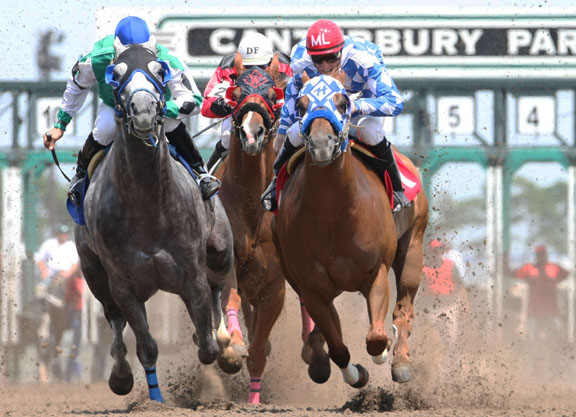 Three Canterbury Park trainers will be held blameless for a total of four positive post-race tests for a banned leanness-promoting livestock feed additive, the track's board of stewards has ruled.

The Aug. 28 decisions to disqualify the positive-testing horses without sanctioning the trainers comes after a Minnesota Racing Commission (MRC) investigation discovered evidence of contamination in the bagged feed that the trainers had all obtained from the same Rosemount, MN, processing mill. The four positives all occurred between June 30 and July 7.

The substance in question is ractopamine, which the Association of Racing Commissioners International lists as a Class 2, Penalty Category A drug.

Although legal in the United States and Canada as a supplement in cattle and swine feed, ractopamine is banned in livestock feed in 160 other countries, including the European Union, where the additive is considered unfit for human consumption.

Two of the horses that tested positive for ractopamine were winners: Miss My Sis) paid $17.20 for trainer Bruce Riecken when breaking her maiden by 6 1/2 lengths in a July 7 MSW. Yes by Gold, trained by Nancy Sheehan, paid $34.20 when scoring by a head in a $10,000 claimer June 30.

The two other positives that occurred belonged to horses that both finished fifth in their respective races for trainer Miguel Silva.

The placings and purses have been redistributed for those four races. Miss My Sis came back to officially break her maiden at Canterbury Sept. 3.

The boilerplate language in each of the stewards' rulings explained that according to testimony from Dr. Lynn Hovda, chief veterinarian for the MRC, “ractopamine has no legitimate use in a horse as it increases heart rate and also mimics the effects of an anabolic steroid.”

According to the rulings, each of the trainers regularly purchased feed from the same vendor, Joe Palma, who in turn contracted with Fluegel Elevator Inc., to mix his own blend of feed.

The feed mill operator, Greg Fluegel, voluntarily gave a signed a statement to investigators attesting that he routinely mixes feed for an area cattle farmer that contains Optaflexx, the active ingredient of which is ractopamine.

After filling the cattle farmer's June 9 order, Fluegel claimed to have flushed the “leg” of the mill with 400 pounds of ground corn in an attempt to remove any residue before mixing and bagging Palma's horse order the next day.

Apparently, the flushing didn't fully cleanse the contaminant, which the MRC later confirmed by analyzing “retainer samples” of both the cattle and horse feed that Fluegel had kept and provided to investigators. –@thorntontd