Constitution's Promise Keeper Runs to the Money in Peter Pan 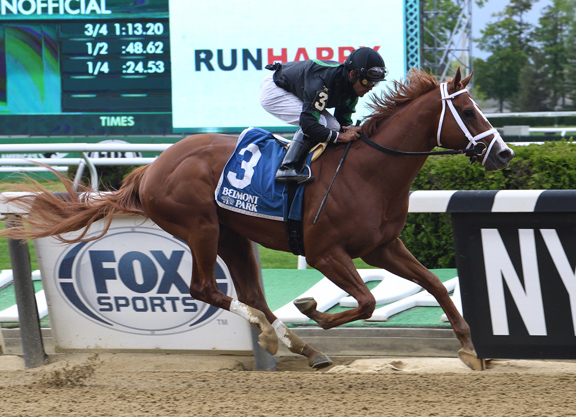 Promise Keeper (Constitution) tossed his hat in the ring as a potential GI Belmont S. starter with a strong performance in Saturday's GIII Peter Pan S.

The chestnut, off as the 3-2 favorite, sat a stalking trip in second as the comebacking maiden winner Wolfie's Dynaghost (Ghostzapper) led through fractions of :24.53 and :48.62. Promise Keeper struck the front as they hit the quarter pole, and, after getting a bold challenge from Nova Rags (Union Rags) in the stretch, swatted that foe away to win by an expanding 2 1/4 lengths.

“Historically, the Peter Pan has been a good prep for the Belmont,” winning trainer Todd Pletcher said. “I'll talk to the connections about it, but that was amongst the discussions leading into this.”

Pletcher continued, “He's a big mover and Luis [Saez] was able to do a perfect job putting him in a stalking position and let him take advantage of the rhythmic stride he has. Luis said he had a lot of horse in the end, so that's encouraging.

“I thought tactically that Luis rode a smart race and put him into a good spot and got into a good rhythm. When that horse came to him, he found some more and finished up well. He's got a big bouncy, reachy stride and it seems like the further he goes, the better he gets.”

“Known Agenda and Bourbonic are definitely pointed that way,” Pletcher said. “Sainthood we're going to give a breeze on the turf and make a decision after we see that. Dynamic One is another [under consideration]. Malathaat, it's on the radar, but we're not committed to anything just yet.”

Promise Keeper is the latest of 11 graded winners for third-crop sire Constitution, whose 20 black-type winners include last year's GI Belmont and GI Travers winner Tiz the Law. Promise Keeper's unraced dam, Mira Alta, sold for $200,000 at the 2015 Keeneland November sale and is now the dam of two of Curlin's five stakes winners as a damsire. In addition to Promise Keeper, she has produced SW & GSP Wicked Awesome (Awesome Again) and GSP War Stopper (Declaration of War). In the pipeline is a 2-year-old filly by Shanghai Bobby who hammered for $5,000 as a Keeneland January short yearling, a yearling filly by Honor Code, and a 2021 colt by Mastery. Mira Alta is a half to GISW Great Hunter (Aptitude) and to the dam of MGSW & MGISP Owendale (Into Mischief), and is from the immediate family of champion and $6-million Keeneland sales mare Stellar Wind (Curlin). Promise Keeper's seventh dam is the Sir Gallahad III (Fr) mare Omayya, who has figured in the pedigrees of a number of prominent horses of late, including American champion Tepin (Bernstein) and Australian champion Americain (Dynaformer).