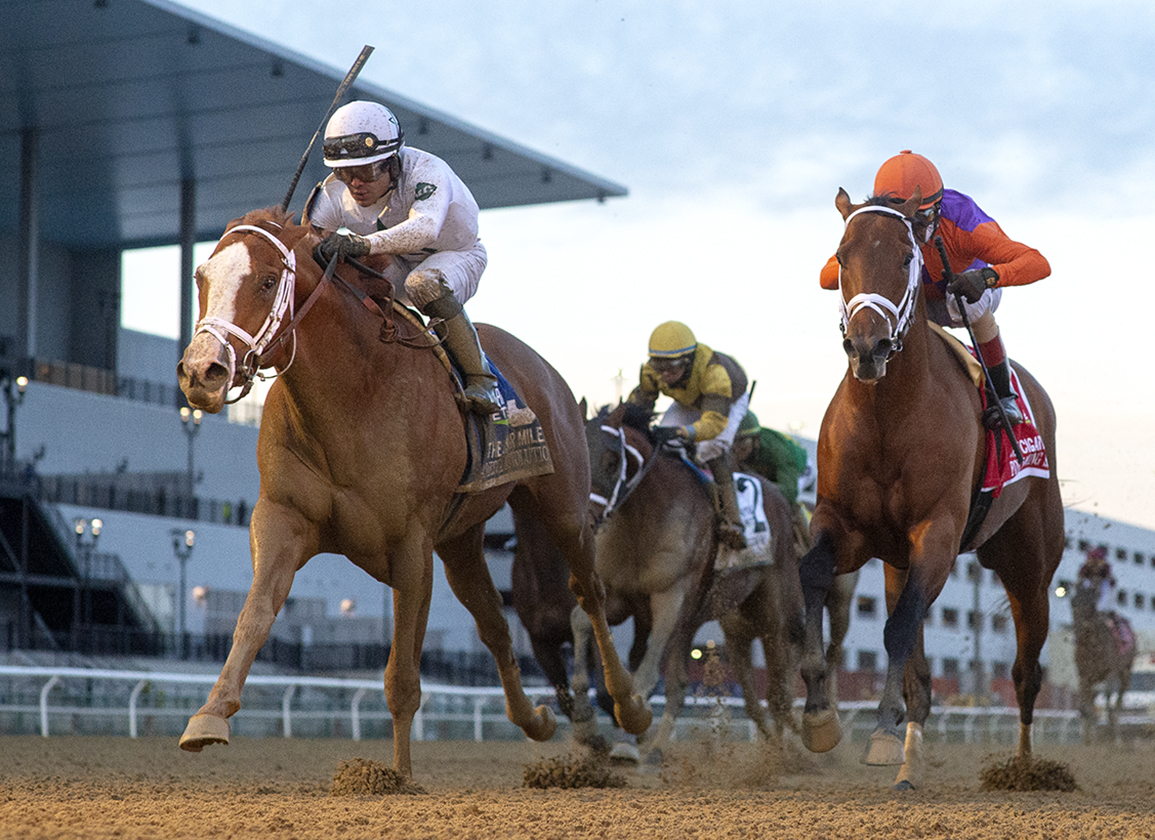 In Todd we trust.

Hall of Fame trainer Todd Pletcher completed a graded Pick 3, and an exacta, to close out the card in style at Aqueduct Saturday as the talented New York-bred Americanrevolution (Constitution) reeled in his stablemate and fellow 3-year-old and 'TDN Rising Star' Following Sea (Runhappy) in the GI Cigar Mile H. presented by NYRA Bets.

Coming off an 11 3/4-length drubbing in the Empire Classic H. going 1 1/8 miles around one turn against state-breds in the slop with a gaudy 108 Beyer Speed Figure at Belmont Oct. 30, the tepid 5-2 pick seemed to be spinning his wheels a bit while sitting in between horses in midpack as the rail-drawn Following Sea, a last out third with trouble in the GI Breeders' Cup Sprint, narrowly showed the way with GI Breeders' Cup Dirt Mile runner-up Ginobili (Munnings) in hot pursuit through fractions of :23.19 and :46.04.

Under a ride beneath Luis Saez entering the far turn, the CHC Inc. and WinStar Farm colorbearer and $275,000 Fasig-Tipton Saratoga yearling popped out and got going three deep at the head of the lane, but brushed with Plainsman (Flatter) as that rival tried to force his way out of a spot inside the three-sixteenths. Americanrevolution kept on coming, however, and leveled off nicely with massive strides to forge past his stablemate by a half-length in the shadow of the wire. Plainsman was third. The stewards looked at the aforementioned stretch bumping but made no change.

“Luis [Saez] rode him terrifically,” Pletcher said. “He kept him going in the turn when he was in traffic and things were getting tight. He responded to an energetic ride. He never gave up on him and I think that was important, especially backing up from the mile and an eighth. He never wanted to take his foot off the peddle. He kept coming and we knew he'd be fit backing up in distance.

Pletcher continued, “We weren't 100% positive about the mile, but a lot of times good horses do multiple things really well and I think he's a great example of that. Constitution puts so much determination into his offspring and they're just like he was– very tough horses and versatile. It's great to see him get that Grade I win.”

Americanrevolution kicked off his 3-year-old season with three straight wins, including the New York Derby at Finger Lakes July 19 and Albany S. at Saratoga Aug. 27, all against fellow state-breds. He far from disgraced himself against open company with a solid third-place finish in Hot Rod Charlie (Oxbow)'s GI Pennsylvania Derby Sept. 25 before his tour-de-force in the Empire Classic.

“He's a rare horse that when you look at his figures, he's improved every single start of his life,” Pletcher said. “That's great to see. It was a hard-earned win today, but he fought on.

Looking ahead, Pletcher added, “The way he ran the mile and an eighth [in the Albany and Empire Classic] would give you hopes he would be a Classic-type horse. I think the plan is to send him to WinStar now and give him a bit of a freshening.”

“We felt good coming into today that we had some horses that were training the way you'd want them to be training leading up to a big race,” Pletcher said. “We were excited about the day coming in and it was one of those rare occasions where everything fell into place and everyone ran their race.”

Breeding a Grade I winner is the elusive grail, but Fred W. Hertrich lll and John D. Fielding have reached the pinnacle together two weekends in a row as, in addition to Americanrevolution, last Saturday's GI Hollywood Derby victor Beyond Brilliant (Twirling Candy) was also a product of their program, along with Robert L. Tribbett. The 3-year-olds were foaled just three days apart in their 2018 crop, albeit Americanrevolution in New York and Beyond Brilliant in Kentucky. Both were eventually sold with Americanrevolution fetching $275,000 as a Fasig-Tipton New York yearling from China Horse Club and Maverick Racing.

Hertrich had bought Polly Freeze as a maiden winner at the 2016 Keeneland November sale while she was carrying her first foal, a filly by Wicked Strong. The Super Saver mare also has a placed 2-year-old colt named Bold Journey (Hard Spun), a yearling filly by Collected, and was bred back to Frosted. She is one of three of Super Saver's daughters who have produced a black-type winner. The 14-year-old stallion formerly stood at WinStar but relocated to Turkey for the 2020 season. The Pletcher-trained Constitution, who leads the third-crop sire list, has remained at WinStar. In addition to Americanrevolution, the nine other graded winners among Constitution's 17 stakes winners have included MGISW and fellow New York-bred Tiz the Law.