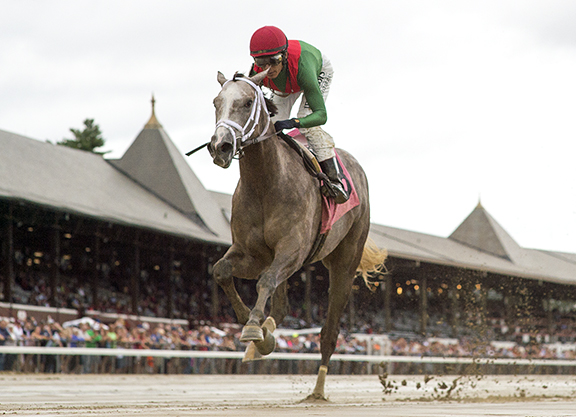 The cleverly named Gouverneur Morris (c, 2, Constitution– Addison Run, by Unbridled’s Song), picked up for $600,000 after breezing an eighth in :10 1/5 at the FTFMAR juvenile sale, ran to the billing as the 3-5 favorite to earn the ‘TDN Rising Star’ nod in his Saratoga unveiling over the sloppy going on closing day.

Trained by Todd Pletcher, the gray’s worktab included a sharp four-furlong breeze in :47 3/5 (17/108) at the Spa Aug. 17. Gouverneur Morris was last of seven out of the stalls and took a bump shortly after the start from his inside. He recovered quickly to sit a perfect trip in third as Maximiliano (Quality Road), a $425,000 KEESEP yearling purchase, and Secret Rules (Secret Circle) battled through an opening quarter in :22.38. He ranged up with a sweeping move while about five or six wide approaching the quarter pole, and from there it was just a question of how much he’d win by. The Team Valor and WinStar Farm representative was handridden down the lane by John Velazquez en route to a powerful nine-length decision. Maximiliano was second; Secret Rules was third.

The February foal, a half-brother to this year’s GIII Dwyer S. runner-up Final Jeopardy (Street Sense), MGSP, $164,450, becomes the 11th winner for his freshman sire (by Tapit). Gouverneur Morris was the most expensive of 41 juveniles to switch hands ($110,843 average) by his sire this year.

The stakes-placed Addison Run, a $360,000 purchase by Machmer Hall while carrying Gouverneur Morris at the 2016 KEENOV Sale, produced a colt by Runhappy in 2018 and a filly by Into Mischief this year. She was bred back to Candy Ride (Arg). This is the extended female family of champion 2-year-old colt and GI Breeders’ Cup Juvenile winner Midshipman (Unbridled’s Song) and MGISW Frosted (Tapit).