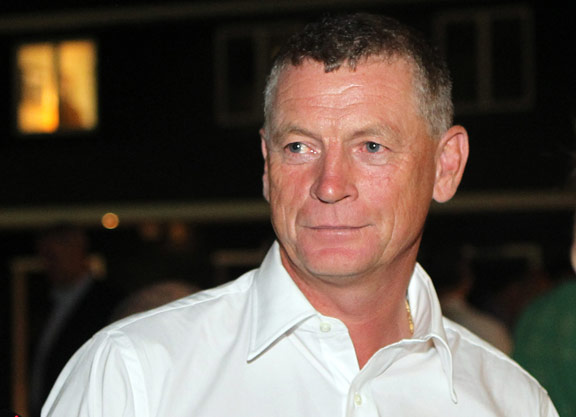 With the 2-year-old sales right around the corner, the TDN reached out to consignors with juveniles heading to the sales rings at the Mar. 16 and 17 Ocala Breeders' Sales Company's March Sale of 2-Year-Olds in Training and the Mar. 31 Fasig-Tipton Gulfstream Sale to discuss which of their offerings by first-crop sires have impressed them. This is the second installment of the series (click here to view the first section which was published in Tuesday's TDN).

Among the 26 juveniles Ciaran Dunne's Wavertree Stables has consigned to the OBS March sale and a further 22 targeted at the Gulfstream sale are a bevy of youngsters by first-crop sires. Dunne joined the chorus of consignors singing the praises of Practical Joke (Into Mischief–Halo Humor, by Distorted Humor).

“Some of the first-season sires, people want to get excited about because they are a little precocious,” Dunne said. “The Practical Jokes actually look like they have a bit of quality. They have speed, but they aren't all speed all the time. Obviously, it's early days, but they have been very sound horses to this point and are very easy to train. You don't have to gear your training around them, they just do whatever you put in front of them. He was a fast horse himself, so they should be fast, but they have a license to go a little bit farther.”

Wavertree will offer a colt by the Ashford stallion (hip 273) at the OBS March sale and a colt (hip 31) and filly (hip 156) at Gulfstream.

“The colt we have in March looks like he'll be very early and very quick, but he's a half to a really quick filly [Jo Jo Air {Scat Daddy}]. The two that are in Gulfstream, the filly is beautiful. She's big and tall and leggy. She's out of a Five Star Day mare and I don't know why she looks the way she does because it's speed on speed and she is big and strong and beautiful and looks like she'll go two turns. And the colt that is down there has a big pedigree. He is a half to [graded winner] Plainsman (Flatter) and [graded-placed] Liam (Liam's Map).”

Dunne continued, “We have an American Freedom filly (hip 154) for Gulfstream that was a very expensive yearling [$160,000 FTKSEP], but she acts the part. She was beautiful filly as a yearling. She ticked all the boxes then, and now in training she is the same. She's tall and lean and leggy and gets over the ground well. She acts like she could have a bit of quality.”

Wavertree will offer a pair of colts by Unified (Candy Ride {Arg}–Union City, by Dixie Union) at the OBS March sale. The Lane's End stallion, who stands for $10,000, won the 2016 GII Peter Pan S. and GIII Bay Shore S., as well as the 2017 GIII Gulfstream Park Sprint S.

“The Unifieds that go to March are surprisingly quick,” Dunne said. “I wouldn't have thought that they had the license to be that fast.”

Dunne will send a pair of fillies by Claiborne Farm stallion Mastery (Candy Ride {Arg}–Steady Course, by Old Trieste) through the OBS sales ring (hip 173 and hip 378), and a colt by the Grade I winner will be offered at Gulfstream (hip 33).

“The Masterys are beautiful horses,” Dunne said. “Really, really good-moving horses. How quick they will be at the end of the day, I don't know, but from the way they are training on a day-to-day basis, they are very impressive and they look like they will be two-turn horses.”

Wavertree has a pair of juveniles by the late champion Arrogate (Unbridled's Song–Bubbler, by Distorted Humor), one of which will be offered at Gulfstream as hip 158.

“The Arrogates we have we really like,” Dunne said. “It's obviously going to be a small sample with him, but he seems to have thrown to the mare. We have one out of a Salt Lake mare and one out of a Silver Deputy mare and that's kind of what they are. But they are both really nice horses.”

The Wavertree freshman sire bench also includes a filly by Klimt (Quality Road–Inventive, by Dixie Union) (hip 84) who will be offered at OBS March.

“The Klimt filly that is in there is very nice,” Dunne said. “She might have been one of the most expensive of the Klimts [$160,000 FTKSEP]. She is a real Quality Road, a big strong filly who looks like she'll run all day. She has a great attitude.”

“We've got five Practical Jokes,” Tristan De Meric said of the much-hyped freshman stallion. “They are all training really well. I'm not telling you anything new, but he'd be my obvious top pick. They all look the part and they are all just getting better the more you do with them. I love their dispositions, they have great minds, they put a lot in their training, leave it all out on the track. They are very professional and very smart, classy nice horses. I have high hopes for him as a sire.”

De Meric Sales will offer two colts (hip 1 and hip 7) and a filly hip 81) by the multiple Grade I winner at the Gulfstream sale.

The Ocala-based operation will offer a colt by Horse of the Year Gun Runner (Candy Ride {Arg}–Quiet Giant, by Giant's Causeway) (hip 388) at OBS in March.

“We have three Gun Runners,” de Meric said. “One is in the March sale and he's freaky fast. He's a very quick colt with a good family behind him. He's out of Brazen Persuasion, who was a good race mare. He is the only Gun Runner we have going to a sale, but the two we have for the races are also really nice horses. I'd be surprised not to see Gun Runner up there next year also.”

De Meric added, “At the yearling sales, we obviously tried to pick up a few more Practical Jokes and Gun Runners, they were just hard to buy and we didn't end up with as many as we wanted. But we are thrilled to have a few of them because they are doing great.”

Another freshman sire whose progeny have impressed de Meric is Connect (Curlin–Bullville Belle, by Holy Bull). De Meric Sales will offer a pair of colts (hip 71 and hip 524) by the Lane's End stallion at the OBS March sale and a third colt (hip 60) at Gulfstream.

“I think, as a sleeper sire, Connect might be really good,” de Meric said. “They may be later developing. We have one entered in the Miami sale out of Wild Hoots (Unbridled's Song). He looks the part. There is nothing not to like about him. He's a beautiful horse. And we have a really nice filly out of Nest Egg (Eskendereya) going to April who is an elegant, two-turn looking filly.”

Of his impressions of the Connects he has seen, de Meric said, “The ones we have, they are throwing to the broodmare sire maybe a bit. But they are great-minded and training really well. I wouldn't say the five we have have a lot of similarities, but the one similarity that they all have is that they are all training great. They have great minds and I think they are going to be solid, nice horses.”

Of his expectations for the upcoming calendar of 2-year-old sales, de Meric said, “The top end will be as strong as ever, I hope. It will be interesting to see how the rest of the market is. Hopefully, there is a deep pool of buyers and we can move horses and have a good year.”

Top Line Sales had its first seven-figure sale a year ago when a daughter of first-crop sire Not This Time sold for $1.35 million at the OBS Spring Sale. The operation has another strong group of freshman offerings in 2021, led by the omnipresent Practical Joke.

“They are just extremely forward horses,” Torie Gladwell said of the Practical Joke juveniles who will represent Top Line in the sales ring this spring. “The ones that we have, you're almost slowing them down. They just want to do too much too early. So we are just trying to slow them down and do what we need to do to get there and keep them happy and sound. Because they are the kind of horses who want to go out there and do too much.”

Top Line Sales has a filly (hip 311) and colt (hip 563) by Practical Joke catalogued at the OBS March sale and a second filly (hip 85) targeted at Gulfstream.

“The filly going to Gulfstream, she wasn't a really big filly when we bought her and now she's probably 15.3,” Gladwell said. “We actually went and bought her mom [Caribbean Lady {Speightstown}] and her baby sister by Mendelssohn, we liked this filly so much.”

“We have two American Freedoms,” Gladwell said. “They are a little bit bigger than some of the other freshman stallions that we have, but they seem precocious and early.”

Gladwell said she has also been impressed by the first crop of runners by 2016 GI Del Mar Futurity winner Klimt.

Reflecting on the success Top Line enjoyed with $1.35-million future Grade I winner Princess Noor (Not This Time) at last year's Spring Sale, Gladwell said, “I think it really just proved that those top, top horses can step up and perform no matter what sale you go to, whether it's June, April, Miami, Maryland. It doesn't matter who the horse is by, whether it's a freshman stallion or not, if a horse steps up and performs, you're going to get paid for it.”