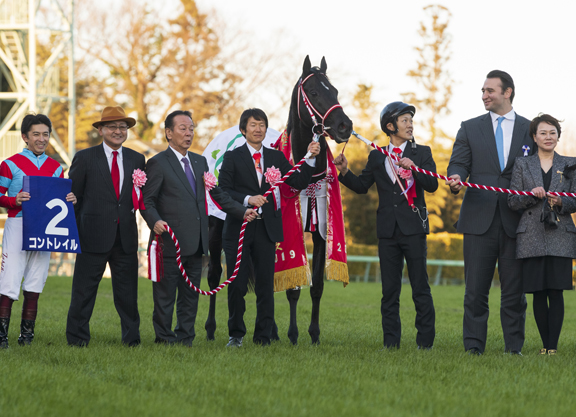 Contrail (Jpn) earned his first win at the highest level while remaining undefeated with a professional victory in Saturday's G1 Hopeful S. at Nakayama. Sent off the 2-1 choice in the field of 13, Contrail broke sharply from an inside draw and was immediately settled in a stalking fourth behind Panthalassa (Jpn) (Lord Kanaloa {Jpn}), who rushed out from stall nine to set a brisk pace. Gradually improving his position through the last two turns, the favorite easily reached the heels of the leader 400 meters out, took over effortlessly passing the furlong pole and pulled away for a confident 1 1/2-length victory. Weltreisende (Jpn) (Heart's Cry {Jpn}), settled off the early pace, closed 600 meters out, but was not match for the winner. Wakea (Jpn) (Heart's Cry {Jpn}) closed from the outside to finish third.

“He was really strong. I didn't have to do anything but just sit on him,” affirmed winning jockey Yuichi Fukunaga, who was winning his third JRA-Group 1 title this year and 25th overall. “He's always been a good starter and I didn't want to pull him back too much. I was able to settle him behind another runner and although [the leader] was racing well up front, I was confident that we could make it through to the end. He does tend to be a little keen, but the training staff had conditioned him to [rate], so it worked well in the race. He really changed his gear effortlessly, but seemed little lost once up front. He is still a little green, which [I suspect] is why Ryan [Moore] rode him the way he did last time. He really showed potential for his upcoming 3-year-old campaign.”

Trainer Yoshito Yahagi, who won the G1 Arima Kinen with Lys Gracieux (Jpn) last week, registered his ninth JRA-Group 1 title in the Hopeful.
After breaking his maiden in his September over 1,800 meters, he followed up with an impressive five-length tally in the G3 Tokyo Sports Hai Nisai S. in November, establishing a new course record in the process.
Rhodochrosite, a $385,000 Keeneland September yearling purchase, is a daughter of 2-year-old champion Folklore (Tiznow), who won four of eight career starts for earnings of $945,500. Among her most notable wins are the G1 Breeders' Cup Juvenile Fillies and GI Matron S.