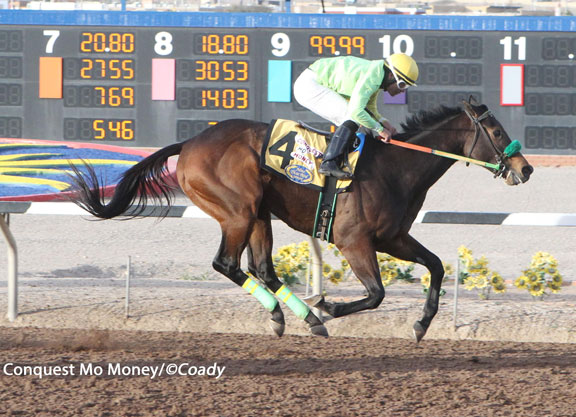 Judge Lanier Racing's Conquest Mo Money (Uncle Mo) suffered a minor injury after working Friday morning at Fair Hill according to multiple reports and will be forced to miss an intended appearance in the GII Woody Stephens S. on the Belmont S. undercard.

An $8,500 purchase by Judge Lanier's Tom McKenna out of the Conquest Stables dispersal at Keeneland last November, the New York-bred won his first three starts in his new colors, including the Riley Allison S. and the Mine That Bird Derby. Runner-up in the GIII Sunland Derby, he earned the right to compete in the GI Kentucky Derby with a second-place finish behind Classic Empire (Pioneerof the Nile) in the GI Arkansas Derby Apr. 15. Connections ultimately took a pass on the Run for the Roses and instead supplemented their colt to the GI Preakness S. May 20, but he was off to a slow start, failed to show the speed most expected and was seventh to Cloud Computing.