Connections of Bricks and Mortar Win Eclipse Awards of Their Own 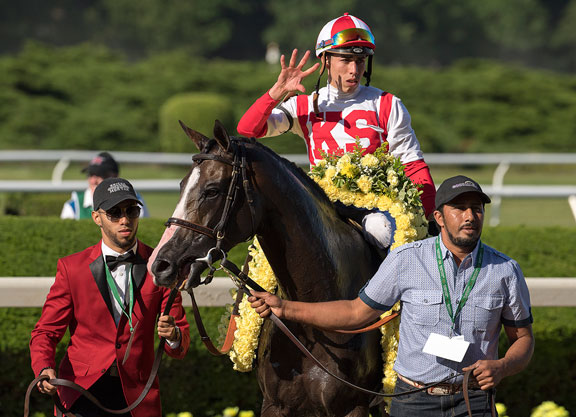 The connections of newly crowned champion Bricks and Mortar all took home Eclipse Awards of their own in their respective categories.

Irad Ortiz, Jr. continued the domination of he and his brother with a second-straight Eclipse Award for Outstanding Jockey of 2019. The 27-year-old native of Puerto Rico took home the hardware last year, following in the footsteps of his younger brother Jose, who received the award for his 2017 season. The Ortiz brothers completed the North American exacta in 2019 by money won–Irad's mounts racked up $34,109,019 with 324 winners from 1516 rides (21%), while Jose piloted the earners of $27,529,006 while taking 274 trips to the winner's circle (19%). Irad led all riders in the country in wins in 2019, as well as in mounts.

“First of all, I want to thank God for all the success I have been having in my career. I want to say thanks to all of the owners and trainers who help me a lot. Without you guys, I wouldn't be here today. I want to thank the Eclipse Award voters, and also thank my agent Steve Rushing, who has done an amazing job for me. I am so happy. I have no words to explain how happy I am right now. So thanks to everyone.” –Irad Ortiz, Jr.

Chad Brown leads all trainers for the fourth straight year with 222 wins and $27,546,057 in earnings. In addition to Bricks and Mortar, his top runners in 2019 include champion Uni and 2018 Eclipse winner Sistercharlie, GI Breeders' Cup Juvenile Turf victor Structor. Brown saddled the winners of 54 graded events in 2019 with 20 Grade Is.

As Hall of Fame trainer D. Wayne Lukas likes to say, the greatest enemy of good is better. And Chad Brown's march toward his fourth consecutive Eclipse Award title underscores that point. Responsible for 222 wins (27%) and with an impressive 62% of his runners finishing in the top three, the Mechanicville native surpassed his own 2018 earnings mark of $27,546,057 by amassing $31,112,144 last season. Also establishing a career-high winning 54 graded wins in 2019, he rounded out the year by equaling his 2018 benchmark of  20 Grade I wins.

“To operate a racing stable of this size and quality requires the largest team effort in professional sports. Luckily, I am on a team of the most talented horsemen and horsewoman that I have ever seen in my 23 years at the racetrack. Their talent, skill and dedication are the reason I'm standing here tonight. I want to thank them and accept this award on their behalf. Thank you to all of our brave jockeys, who rode our horses with amazing skill and concentration. Thank you to my family. And finally, I want to thank all of our amazing equine athletes. They are certainly the reason we are all here tonight.” –Chad Brown

“Thank you so much for this incredible honor. Bill [Lawrence] and I couldn't be more grateful. But even as we celebrate Bricks's amazing year, I want to share a few thoughts about my concerns for the great sport of horse racing.

“The sport is not organized at the national level. We lack uniform rules such as on medication or the use of whips. Stewards' decisions go largely unexplained, creating a sense of chaos and unfairness. The sport is criticized, not wrongly, when the interest of the horses are seemingly put second to economics or personal glory. Those of us who love horse racing–everybody in this room–who appreciate the majesty and courage of our equine athletes must fix the sport or risk its demise.

“We must care for our Thoroughbreds in their retirement. We must insure that the track surfaces are safe at all times and when they are not, races should not be run. We must study the impact of medication on the health and safety of horses. We must insure that no one ever runs unsound horses. Only when we put the horses first are we able to put the sport first.

“Nothing less will do. We are at the tipping point. We truly have no choice but to come together, reform and re-prioritize. Everyone here tonight has had a richer, more exciting and more memorable life because horse racing made it so. Everyone here knows what is wrong and that we can and must do better.
“Thank you for listening and thank you for this incredible honor.” –Seth Klarman of Klaravich Stables