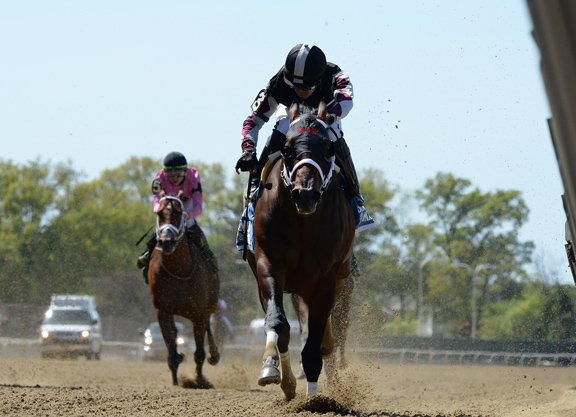 Sagamore Farm and WinStar Farm’s Global Campaign (Curlin) exited his win in Saturday’s GIII Peter Pan S. in fine shape and possibilities for his next start include the June 8 GI Belmont S., the June 22 GIII Ohio Derby at Thistledown and the July 6 GIII Dwyer S. at Belmont.

“He’s a very talented horse and it was good to see him get that behind him,” Stanley Hough said of the ‘TDN Rising Star.’ “Everything is on the table. I wouldn’t say which spot necessarily he should go. It could be the Belmont or the Dwyer or the Ohio Derby. There’s a lot of options right now. He’ll go back to Churchill, he’ll leave [Monday] and get there Tuesday, and we’ll take it a day at a time. Obviously, the Belmont would be a great thrill, I just can’t say we’re pointing towards that way.”

“He’s a unique horse,” trainer Mark Casse said. “He doesn’t have a whole lot of speed and he’s kind of at the mercy of everyone else in the race, but he’ll run all day.”