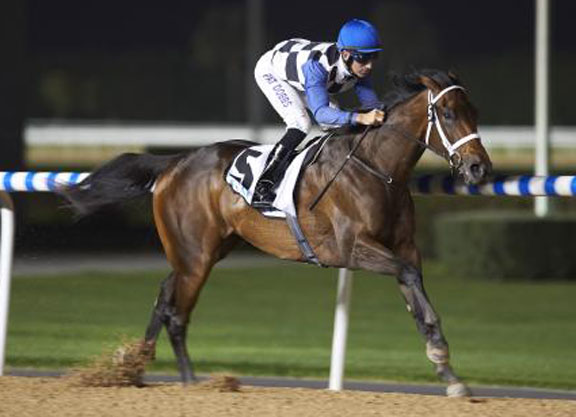 It may not have been the eye-popping Polar River (Congrats) performance that Meydan patrons have come to expect; however, the Middle East’s star 3-year-old filly nonetheless ran her unbeaten record to four in Thursday’s G3 UAE Oaks and once again won without feeling the sting of the whip. Breaking in the air from the outside gate, Polar River quickly recovered as Argentinean Group 1 winner Vale Dori, making her first start since last May, raced to the lead. Polar River and jockey Pat Dobbs sat just off Vale Dori’s flank on the outside down the backstretch with Dolly Dagger on her heels. Drawing even with Vale Dori and jockey Christophe Soumillon around the turn, Polar River appeared poised to draw away to her customary daylight victory. Vale Dori had different ideas, however, and re-rallied to cut Polar River’s margin down to three-quarters of a length on the wire. Despite recording their smallest winning margin to date, Dobbs did not go to the whip and had the filly geared down at the wire. “She just idled in the last furlong but I didn’t want to get serious with her,” Dobbs explained. “She has a good attitude and she does everything perfect. When she hit the front I could feel her pulling up underneath me, but I looked at the screen and we were three lengths clear and I didn’t think Christophe was going to be able to get me.”

Polar River has now won her four starts by a combined margin of 32 lengths. She earned ‘TDN Rising Star’ status when a 13 1/2-length victress on debut when going six furlongs at Meydan Dec. 3, and has followed up while stepping up in distance each start since. The margin was 4 3/4 lengths when she trounced Godolphin’s G2 Rockfel S. scorer Promising Run (Hard Spun) in the seven-furlong UAE 1000 Guineas Trial Jan. 14, and that was followed by a 13-length demolition of the Listed UAE 1000 Guineas, again over that rival, going a mile Feb. 11. There had been whispers of the filly making an American sojourn later this year, and while that topic was not broached Thursday, trainer Doug Watson confirmed the Mar. 26 G2 UAE Derby is still the likely next target.

“That got close at the end,” Watson noted. “[Dobbs] just kind of eased up on her there and we didn’t want a hard race. She put it to bed pretty quickly after the turn in. It was a Group 1 winner she was facing there and Mike [de Kock] is a great trainer, so I’m glad to get away with it.

“I’d like to have won easier but we knew it was a Group 1 winner and likely the best filly she’s faced,” Watson added. “They set a slow pace and it kind of turned into a sprint, and when she did sprint she sprinted away and it looked like he was pretty easy on her.”

Polar River’s dam, Bayou Tortuga, has a 2-year-old Flatter filly named Oh Flatter Me who was a $100,000 Keeneland September yearling last year. She has a yearling colt by The Factor that was bought for $200,000 as a weanling last year at Keeneland November and she is due to foal to Twirling Candy this year.